Use this brand of paper towels to do windows 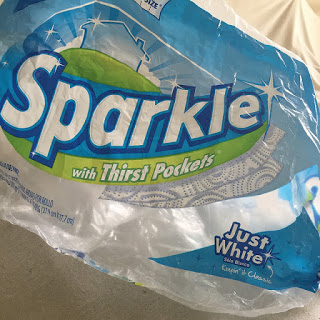 However, someone recently told me that Sparkle paper towel was best for windows because it had no additives that would streak the windows.  I did not know that!

So the more expensive ones are more expensive because they add chemicals and softeners and stuff to them to make them better, but they are only better for absorbency and scrubbing and cleaning for a long period of time.

I had heard newspaper works well and hubby has done that at times, but I was never sold on the idea.

For windows, use cheap!  I tried it.  It's true!  I was cleaning my brand new window that was perfectly clean with the exception of a place where there must have been a sticker.  I was exclaiming at how the window was streaking up with the towel I had in hand.  I switched to a Sparkle towel and it removed the new streaks immediately.