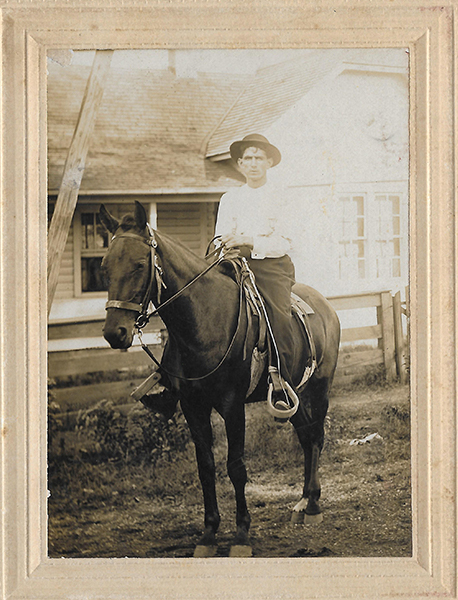 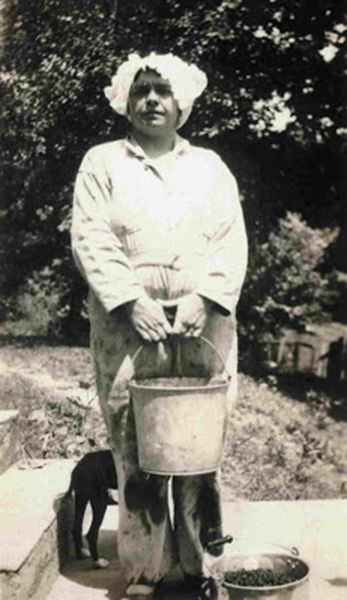 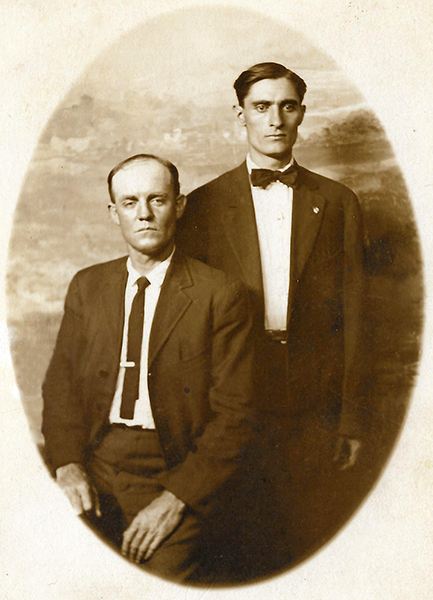 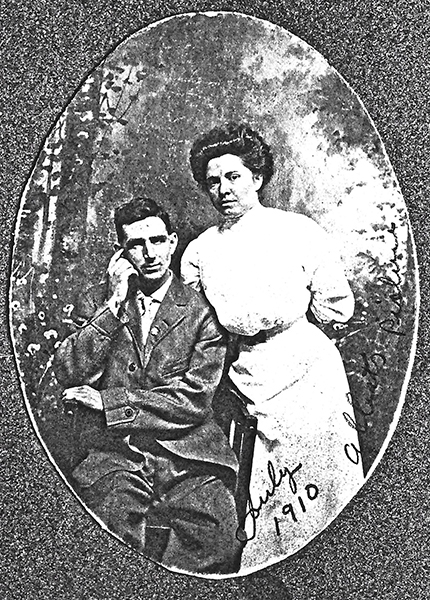 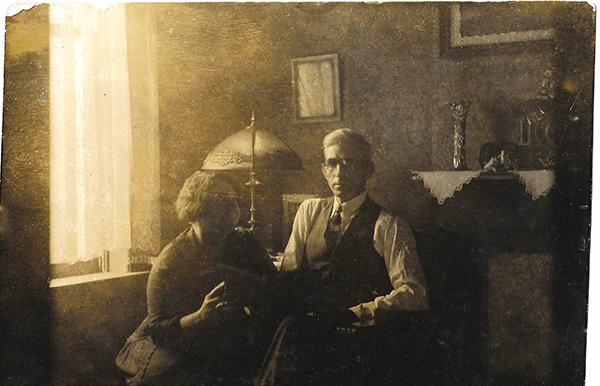 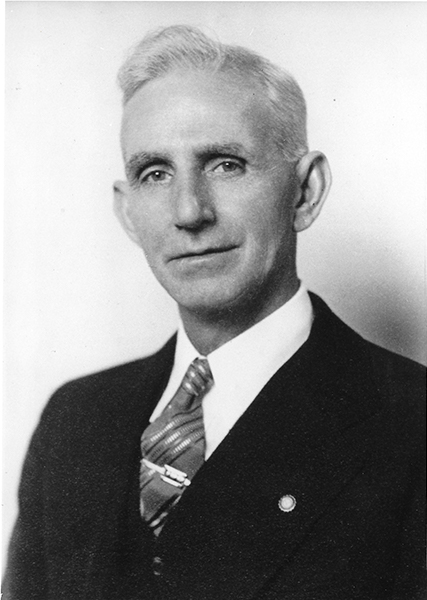 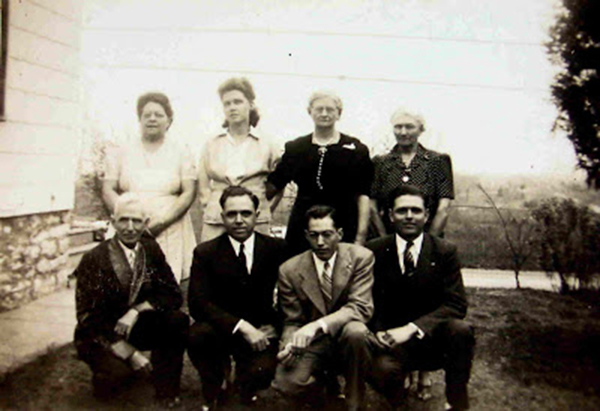 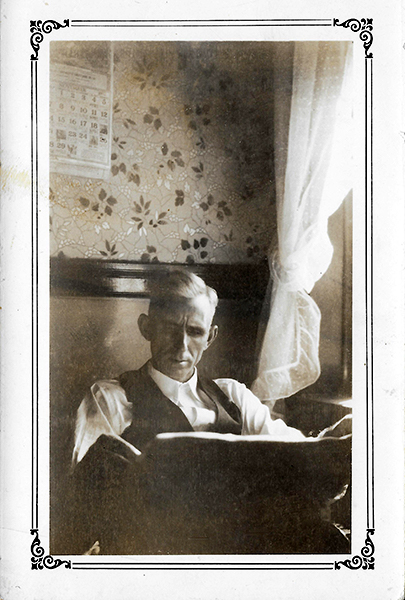 Calendar in Background is November 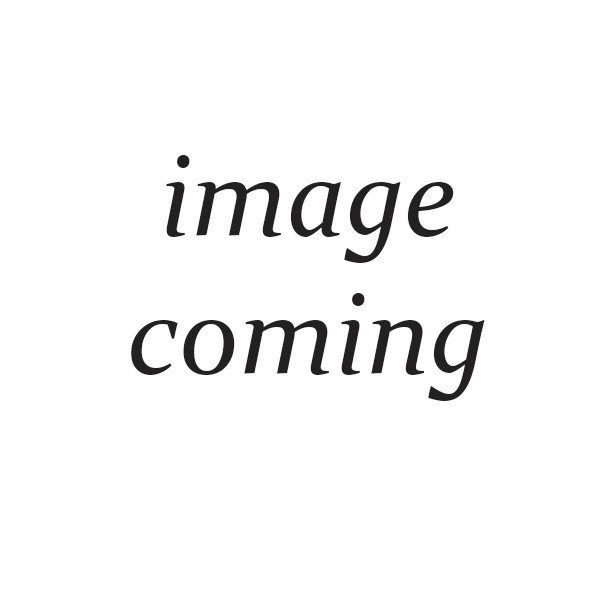 James William Rutledge was born on March 18, 1889, in St. Clair, Franklin County, Missouri. His birth was verified by his Aunt Teresa Rutledge in an affidavit on October 29, 1942. This aunt is married to Stephen John Rutledge, the brother of James William's Father, James Bernard Rutledge. James William also has a brother named Stephen John Rutledge. His Special Certificate of Birth indicates a Bible, marriage license, and the affidavit were utilized to verify his birth.

In 1899, 1903, and 1906, an unbelievable story takes place with Rubina's brother. Is this really her brother? Read his page to decide. If this is the true, Rubina would have had a difficult time with her brother and was pulled into the scandals unwillingly.

In the June 5, 1900 census, St. Louis (Independent City), Ward 15, District 2037, Rubina (age 11) is living alone with her mother, Mary L. (nee Marshall) Wright (age 51) and a boarder names James Green (age 54) at 921 North 20th Street, St. Louis. Mary is marked as widowed and the boarder is marked as being married for 21 years. Mary has had 3 children, with only 2 alive. Rubina's brother, Joseph, was 18 years old. Rubina's and her mom were born in Missouri, as wel as Rubina's parents, but Rubina's Dad was born in Virginia. There is no occupation marked for Mary, but Rubina has an occopation as "helper (Corset Fety)" for the last 10 months. I am not sure if that is a name of a person and who that person might be or something else. At the age of 11, Rubina must have been helping someone out for a little extra cash. Maybe Mr. Green's purpose as a boarder was to help pay the rent. Rubina had attended "0" school, but both could read and write.

According to James William's Dad's (James Bernard) obituary, the family moved to Desloge in about 1904, and his Dad worked for Desloge Consolidated Lead Company for 23 years until his death in 1927, suffering from a baffeling illness the last two years of his life. James William would also work for the same company.

James W. and Rubina Mae were married on June 25, 1910, in St. Louis. In 1910, James W. was working for St. Joseph Lead Company in Desloge, Missouri, where he worked for 13 years until 1923. With James living in Desloge and Rubina in East St. Louis, it makes me wonder how they met. James and Rubina's Marriage Certificate indicates a Pastor F.N. Calvin of Christian Church in St. Louis, Missouri, was the minister. The Certificate indicates James is of Desloge and Rubina is of East St. Louis. Research reveals that Pastor Calvin was a minister at Compton Heights Christian Church which is located at 2149 South Grand Boulevard, St. Louis, Missouri.

On June 5, 1917, James William completed the WWI Military Registration. It is interesting to see his 5th grade education handwritten signature. James is living in Desloge and works as a "stationary fireman" at Desloge Consolidated Lead Company. (History of St. Joe Lead Company also mentions Desloge Consolidated) He has a wife and three children. On the blank for "Do you claim an exemption?" the registrar writes, "family support." He is medium height, medium build, blue eyes, and black hair. On the blank for "Has person lost arm, leg, hand, or foot" the registrar writes, "shot through foot; foot stiff."

Rubina's mother, Mary Marshall, dies on December 15, 1918, in Desloge. She would have been living with the family after Rubina and James married.

In 1919, Rubina sees her brother for the last time. There was an envelope marked "open after I die" in Rubina's documents and one of the handwritten notes indicates that her brother, Joseph Albert, disappeared in 1919. It would make sense that he attended his mother's funeral at the end of 1918 and was never seen again.

Thier third son and fourth child, Wilson Alvin, was born May 16, 1919. Both James and Rubina were 30 years old.

In 1923, the family moved from Desloge to St. Louis. James William's Dad, James Bernard Rutledge died March 7, 1927, and his Step-mom, Sarah Elizabeth died March 14, 1928. James William became employed with General Electric working at the Cahokia generating plant in Illinois where he worked for 22 years until 1945.

In the April 3, 1940 census, St. Louis County, Gravios Township, James, Rubina, and Albert are living at 5144 Heege Road, which is an "owned" home valued at $3,850. James is 51 years old and has education through the 5th grade. He is employed working 40 hours a week as an "operature furnace" in the gas utilities industry in "pw" which represents "wage or salary worker in private work". He worked 52 weeks in the year and his earning was $1,920. Rubina is also 51 years old. Their son Albert is 27 years old. It is interesting that in the column for residence in 1935, James is marked as "same place" and Rubina and Albert are marked as "rural." Consistent with that is "Code D" representing 1935 residence of "X0V1" for "Same county, rural, non-farm" for migration and "6602" (code not identified). Rubina has education through the 5th grade. Albert's "Code B" of 20 (and H3) indicates he has had education through 11th grade or 3 years of high school. The "Code C" of 66 represents "Missouri" as the birthplace. The "1" for Code E is for "At work for pay or profit in private or non-emergency government work" and the "5" is for "Engaged in home housework. Albert is working 42 hours a week as a "packer" in the "wholesale drug" industry. The "Code F" for James of "449 52 1" represents, "Firemen except locomotive and fire department, Gas works and steam plants, Wage or salary worker in private work." The "Code F" for Albert of "496 60 1" represents "Operatives and kindred workers (not elsewhere classified), Wholesale trade, Wage or salary worker in private work (PW)."

James lived through the period of both World Wars and was required to register for both. On April 26, 1942, James completed the WWII Military Draft Registration (Page 1 | Page 2). He was 53 years old. He lived at 5144 Heege Road, St. Louis, Missouri. He worked for Union Electric located at 315 N. 12 Blvd., St. Louis Missouri. He was 5'8", weighed 140 lbs., had blue eyes and grey hair, with a light complexion.

In 1945, due to failed health, James and Rubina moved back to St. Clair where James was born. James was about 56 years old and Rubina was about 57 years old. He was employed 3 years at the International Shoe Company before he retired. 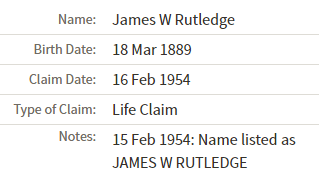 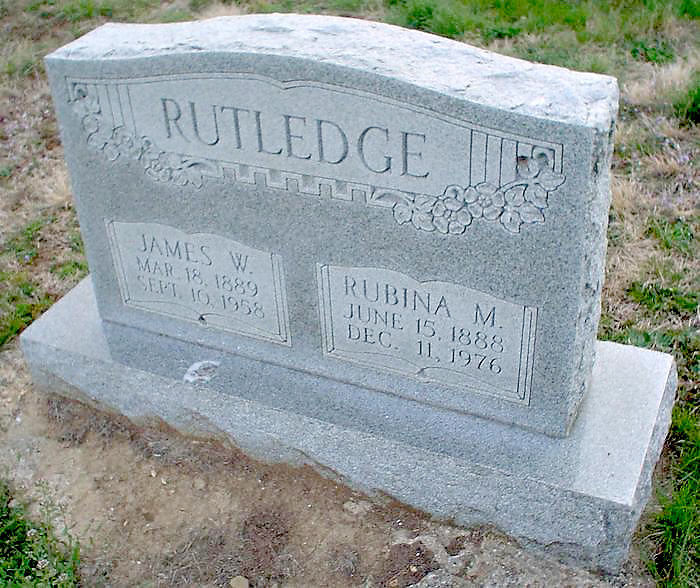 James William Rutledge died September 10, 1958, at Barnes Hospital in St. Louis at the age of 69 years, 5 months, and 22 days. James William's death certificate (another copy of death certificate) indicates he died of a ruptured abdominal aortic aneurysm due to arteriosclerosis. He was in the hospital for 8 hours beginning on the 9th and died at 12:30 a.m. on the 10th. He was retired from Union Electric. His Social Security number was 494-07-2284. He was bured at Oddfellows Cemetery, St. Clair, Missouri, on September 12, 1958.

Rubina Mae (Wright) Rutledge died December 11, 1976, at the age of 88 years, 5 months, and 26 days, at the Home for Aged Baptists in Ironton, Missouri. Both of my Great-Grandmas, Rubina and Lucille, passed away here. Pilot Knob and the surrounding area were Lucille's roots, so her daughter, Jessie Mae, and her son-in-law, Wilson Rutledge (being Rubina's son), would have been familiar with the area and that is most likely why she was moved into the home, a trusting place. Lucille had worked there.