Where our Finlays Lived

The territorial division of the land in Ireland is different from America.

This first division is by Provinces. There are four Provinces in Ireland: Ulster, Connacht, Leinster, and Munster, as shown by the below map. The area in blue is known as Northern Ireland as it is part of the United Kingdom.

There are 6 Counties in Northern Ireland (located in the blue area of the above map) and the below map shows the 6 counties. Image source

The below map (image source) shows all of the counties in both Ireland and Northern Ireland.

The Finlay County of interest is Antrim.

There are 79 parishes in the Antrim County.
The Finlay Parish of interest is Ballynure.

There are 20 Townlands in the Ballynure Parish.
The Finlay Townland of interest is Ballybracken.

Ballybracken consists of 738 acres of land.

The vast majority (70%) of Finlays were found in Counties Antrim and Down in Ulster (the north-east of the island of Ireland and now part of Northern Ireland). There were also some found in Dublin and other parts of Leinster (23%), with just a few in Connaught (6%)and Munster (1%). These statistics are based on the 1890 birth index as analysed by Robert E. Matheson.

Ireland is also divided up into Dioceses for the Catholic Church. (image source)

Our Diocese of interest is Conner.

This image source link above explains the "Church of Ireland" as Catholic and Protestant. There are also Presbyterian churches in Ireland.

The "Barony" is a now-obsolete administrative unit which survived from feudal times to the nineteenth century. There were 58 baronies in the area which comprises the present-day Northern Ireland. (Image source) Our Barony of interest is Upper Belfast which is labeled as #2.

Click on the resource link on the same page to take you to the Baronies which were previously in present day Antrim County where you can see a closer map which shows "Belfast Upper" which is our Barony of interest.

Poor Law Unions (or Superintendant Registrar's Districts) were the areas of administration for poor relief established under the Poor Relief (Ireland) Act, 1838. Because these areas centered on large market towns to a radius of approx. 10 miles, they often tended to cross county boundaries. They became Superintendant Registrars' Districts at the end of the 19th Century. Click on this link to see more. Our PLU of interest is Larne.

My grandparents, Robert & Marie Geile, traveled to Ballybracken, Ballynure, Northern Ireland in search of where Marie's Dad lived, but returned not having found the home. On March 4, 2006, Eileen Finlay and I had made contact via the internet through email and she immediately ran out to take these photos to mail to me. My grandparents both passed away in January of 2000 and I only wish I had found these photos earlier to have shown them.

Click on the image to open a larger image. 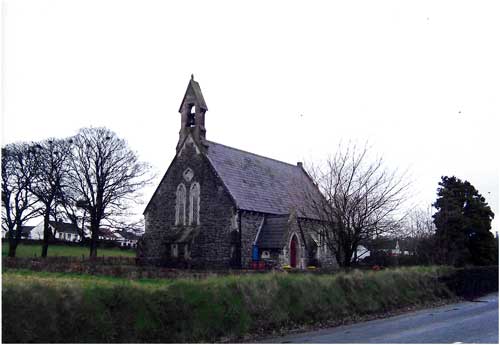 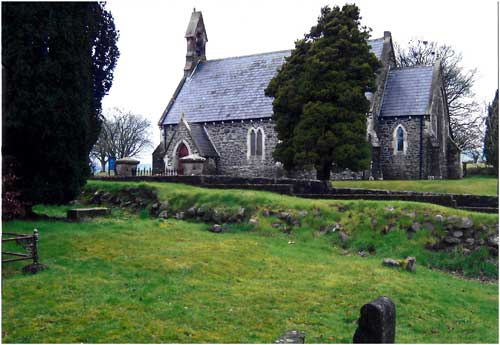 Eileen writes, "We think (nearly sure) the Finlays are buried in this place where there are no neadsstones. From memory, Sam's grave was opposite the church beside the wall." 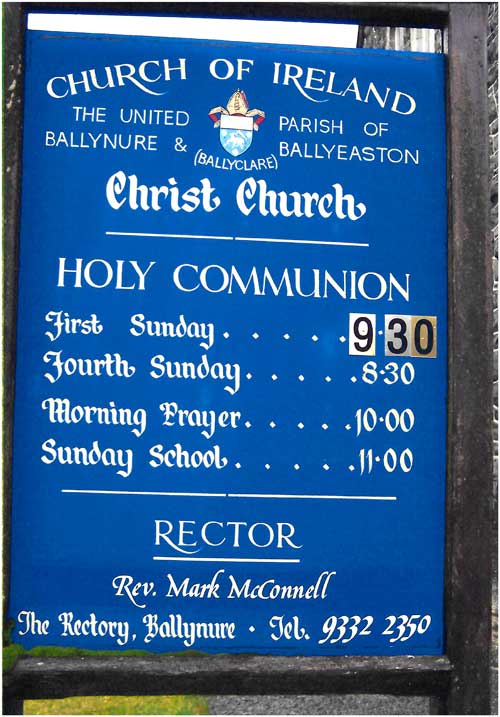 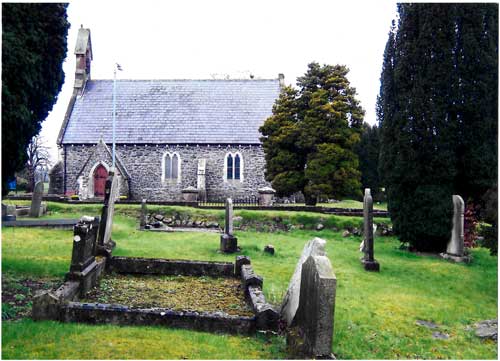 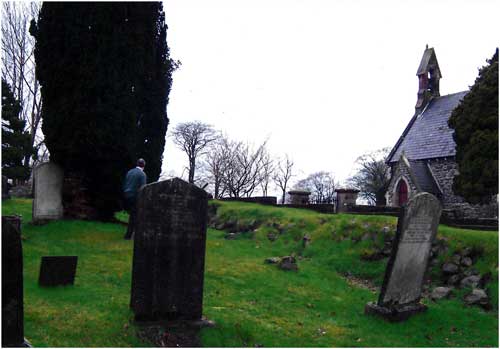 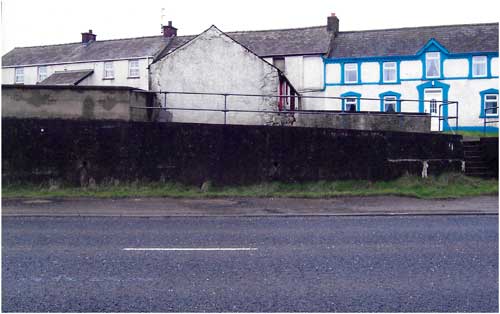 Finlay farmhouse on the left. Jamison home on right (41 Larne)

The Finlay Farmhouse (43 Larne Road, Ballynure, Newtownabbey, County Antrim) is on the left and the Jamison home (41 Larne Road) is on the right. 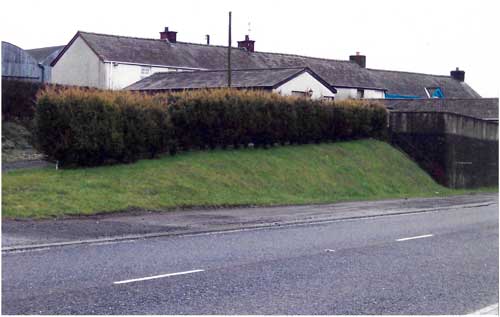 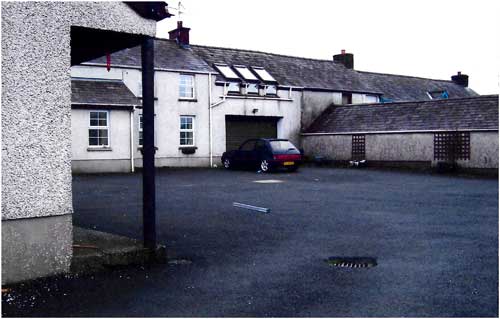 Finlay Farm (Poked Camera Through Gate)Eileen was going to ask to enter the farm, but they were not home! So she poked the camera through the gate. 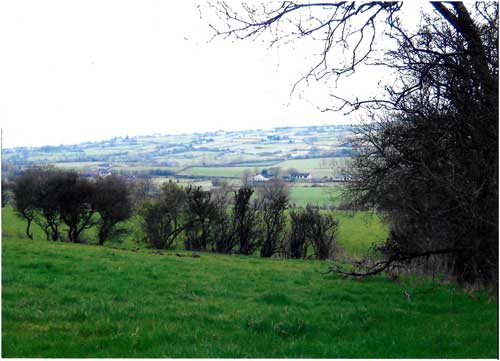 The Countryside opposite the farmhouse. Road Larne to the right. Ballynure & Ballyclare & Belfast to the left.

The Countryside opposite the farmhouse.

The Countryside opposite the farmhouse. The road to Balynure, Ballyclare, and Belfast is to the left. 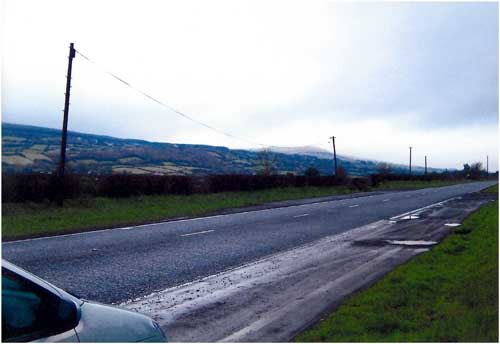 The Countryside opposite the farmhouse. The road to Larne is to the right. 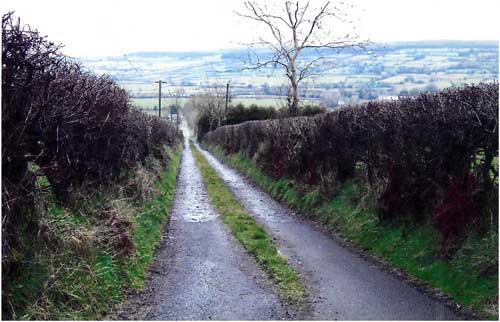 This is my favorite photo.

Sam Houston, first governer of Texas, has roots in Ballybracken, Ballynure. He fought in Alamo.

Find a Church in UK

As I was goin' to Ballynure,
A day I will remember,
For to see the lads and lasses all,
On the fifth day of November.
Refrain:
With a' ma-ring dingle day,
Oh, ma-ringle-dil a' dally-o.

2. As I was goin' along the road
When homeward I was walking,
I heard a wee lad behind a ditch-a
To his wee lass talking,
Refrain:

3. Said the wee lad to the wee lass
"It's will ye let me kiss ye,
For it's I have the cordial eye
That far exceeds the whiskey,"
Refrain:

4. This cordial that ye talk about
There's very few o' them gets it,
For there's nothin' now but crooked combs
And muslin gowns can catch it.
Refrain:

5. As I was goin' along the road
When homeward I was walking,
I heard a wee lad behind a hist
To his wee lass talking,
Refrain:

The song is a folksong.

A Ballynure Ballad was first known published in 1925 in H. Richard Hayward, Ulster Songs and Ballads of the Town and Country.

Folksingers in America and elsewhere first heard it from Richard Dyer-Bennett, who recorded it as "As I Was Going to Ballynure" for Asch / Stinson around 1949-1950. Dyer-Bennett is likely to have learned it from the McCormack recording.

This document is written to John Finlay from the City Chambers in Belfast on July 30, 1936, John G. H. Wilson, Jr.

Proni indicates that Mr. Wilson deposited some of his records as public records.

Judith Finlay Thursday, 1/22/04, 2:51 PM
My husband is descendant from FINLAY from Co Antrim in Ireland and your site is of extreme interest. Although your William FINLAY does not fit into our direct line it is possible that her may fit into our first generation as a sibling on John FINLAY born 1810. The names that are mirrored in our line are William, John, Mary Jane, Elizabeth and a few others. Keep up the good work
From: NSW Australia
E-mail: jfinlay@iprimus.com.au

Jenifer (Kuester) Nelson Thursday, 10/16/03, 7:47 PM
Hi; You have a very well done site. The name Grunke appears in my Kuster/Kuester/Schinke/Schunke family. This family came from Prussia, to Watertown, Wisc. then by wagontrain to Elkhorn Twp. at Beemer, NE and settled in 1866. Beemer is the next town West of West Point. There is a Grunke buried in the Immanuel Lutheran Cemetery just south of Beemer. This area was inhabited by Omaha Indians when these settlers arrived. There is still an Indian Reservation in the area. Believe north and east of West Point. Would be glad to share any more info. It seems a Heller girl married a Gunke. Both she and a sister that was married to one of my great uncles died on the same day. I too, am looking for more information on this family. Keep up the good work. Jenifer in NE
From: Lincoln, NE
E-mail: jenifernel@msn.com

Sue McNare Monday, 6/23/03, 8:37 PM
You contacted my half-brother, John Armstrong, since he had a Grunke listed in his "family tree". The Grunke is my mother-in-law. If you would send me your email address, I would send you her address and phone number. She grew up in the Stuart/Newport NE area. She's never talked much about her family, but at the time of her mother's death (1982) I know she had some Grunke cousins in the Oakdale/Tilden NE area. Since my MIL is pretty much house-bound, she might welcome the chance to communicate with someone who might be a distant relative. Since it's not a real common name, there is probably a connection somewhere.
From: Merriman NE
E-mail: mcnare@gpcom.net

Dona Windfeldt Saturday, 5/24/03, 2:47 PM
Hello, I have really enjoyed your web site. My Grandmother Augusta was a Grunke who with my Grandfather StClair came to California from Wisconsin. I do have lots of questionds on the Grunke family. Will conact you by email. SOON!!! Regards, Dona
From: California
E-mail: windydona@saber.net

Robin Findlay Monday, 5/12/03, 1:27 AM
Keep going! I'll be interested to see what develops on your tree!! Regards - Robin.
From: London, England
E-mail: rrobinfindlay@aol.com

Marlene Pauly Tuesday, 2/1/05, 4:56 PM
By accident I came upon this website doing a search of Ballybracken. I am also a descendant of William John Finlay and Jenny Jamison. I was quite excited to find this website. Very nice. Marlene
From: Ottawa, Ontario, Canada
Email: mpauly@magma.ca


Lisa Schefus Sunday, 7/18/04, 7:51 PM
My Great Great Great Grandparents were Johann and Joanne Grunke, there daughter was Mary Grunke who married Henry Dickmeyer, they had Louisa Dickmeyer who married Henry Briese and they had my grandmother Meta Briese who married George Schefus. I am looking for info on this line of Grunke's and whom also may be related, they ended up in Minnesota from Wisconsin from Pommern Germany.
From: Redwood Falls, Minnesota
Email: l.schefus@comcast.net