In the April 28, 1910 census, Commerce, Scott County, Missouri, District 0163, Pearl is 18 years old as a general farm laborer, can read and write, and has not attended school. He is living with his Dad, Andrew (51) who is widowed, who is a farm laborer, renting a house. Also in the home is is brother, Thadius (20) working as a farm laborer.

Why did they move to Commerce? Where are his siblings? When did Nancy die? She is widowed.

In the January 9, 1920 census, Commerce, Scott County, Missouri, District 0186, Pearl is living with his older sister, Effie (Kent) Lumm (39), her husband William, and their children. William is a carpenter and Furherman. Pearl is 28 years old and his occupation is farm laborer for wages. He can read and write. The census indicates that Pearl is born in Illinois, as well as both of his parents. In the 1910 census, his sister Effie and family were living in Enford, White County, , having been married 4 years. When did Pearl's Dad die? When did Effie move to Commerce and was it to be closer to an ailing Dad?

Pearl and Manna were married on July 26, 1920 (Cape Girardeau County marriage license). Pearl was 28 years old and Manna was 23 years old. According to the county marriage record, Pearl was from Commerce and Manna was from Neely's Land. They were married at Jackson by a Methodist "Minister of the Gospel" by Reverend W. A. Humphreys who was a Pastor at New McKendree United Methodist Church. They may not have attended the church, but utilized the services of the minister. 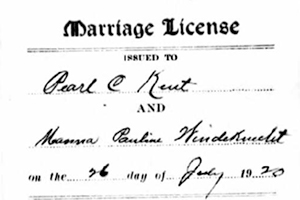 In the 1930 census, Cape Girardeau, Cape Girardeau County, Missouri, Pearl (38) and Manna (32) are living on "Rand Street Continued" (probably Hill Street). Pearl owns his home which is valued at $700. He was age 28 when first married and she was 23 when first married. Pearl is a laborer at a light plant. The "employment" and "unemployment schedule" fields have been written in and then written over. The employment field is whether a person has actually worked and it has been transcribed as "no." Pearl is a veteran and it is entered "WW" for World War I. Manna and the children's occupation is marked as "none." The children in the home are Charles Ercie (9), Blanche (6), Pearl Jr. (5), Opal E. (3 4/12), and Frances J. (10/12). Pearl worked putting up utility poles in Cape Girardeau.

In the 1939 City Directory, Pearl is working as a "lab" for laborer. The "h es" is Hills Electric Shop at 109 Broadway. It appears their home is listed at an address of "Hill 2 n Johnson." Johnson Street does intersect with Hill Street and their house was north of the intersection.

Pearl and Manna's home was destroyed in the 1949 tornado in Cape Girardeau.

In the 1954 city directory, Pearl and Manna are living at 1505 Hill. Their sons Earl L. and Jerry L. are pin setters at the K C Bowling Alley. Their son Charles E is married to Norma and working as a factory worker at the International Shoe Company, living at 826 N. Spanish.

Pearl died on June 4, 1954, at the age of 62 years, 1 month, and 17 days. According to Pearl's death certificate, he died of cardiac arrhythmia from a condition of arteriostenosis (narrowing of artery). He was a general laborer for Missouri Utilities. He had lived at 1500 Hill Street, Cape Girardeau, Missouri, for 30 years (about 1924). He was buried on June 6, 1954, in Iona Cemetery near Trail of Tears State Park in Cape Girardeau County.

In the 1956 City Directory, Manna is a widow of Pearl living at Hill Street. Their sons Earl L. and Jerry L. are pin setters at the K C Bowling Alley. Their son Charles is working for a lab called Rodibaugh-Cargle and living at 826 N. Spanish.

In the 1958 City Directory, Manna is a widow of Pearl living at 1525 Hill Street. Their sons Earl L. and Jerry L. are pin setters at the K C Bowling Alley. Their son Charles is a diver for the Tatlar Meat Company and living at 826 N. Spanish Street.

In the 1960 City Directory, Manna is a widow living at 1525 Hill Street. Charles is a driver for Tatlar Meat Company and lives at 826 N. Spanish. Earl L. is a kitchen helper at Southeast Missouri State College and Jerry is a pin setter at KC Bowling Alley.