In the October 17, 1850 census, Bellview Precinct, Calhoun County, Illinois, Thadeus Kent is 21 years old working as a laborer and from Ohio. He is living with a Hanah McClelland (53), George McClelland (11), and William McClelland (13). (Note: Was he related to Hanah or was he working his way down Illiniois from Ohio and staying with them to help them out for a while, assuming she was widowed with two children.) At the age of 21 years, he would have been born in 1829. If he were born in 1832 as in a later census, his age would have been 18. 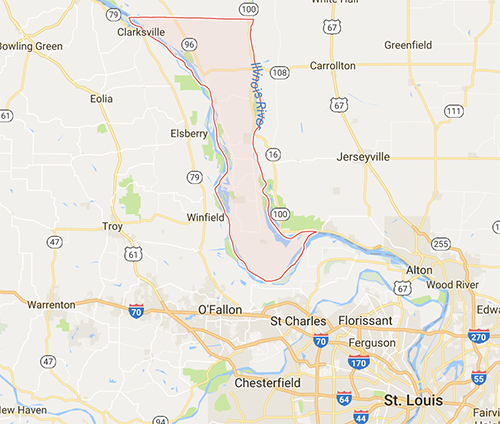 Bellview precinct is at the top of Calhoun County near Clarksville. 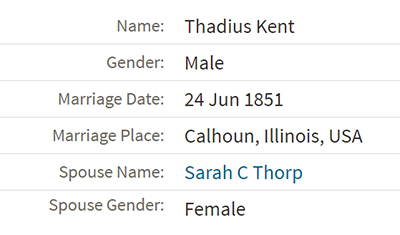 Thadius and Sarah meet in Calhoun County, Illinois and are marriage June 24, 1851. The above are two references found on Ancestry to the marriage, but the transcription of Sarah's name is different. Is she Sarah E or Sarah C? Is she Thorp or Tharp? He would have been 17 1/2 and she would have been about 21. (Note: Get a copy of marriage record to transcribe it for accuracy.)

The book called "I Remember: early memories of Chester Illinois" by Jessie Lee Huffstutler is an interesting read to bring the city to life.

Thad and Sarah have a daughter, Johanna Kent, in March 1853, born in Illinois. Johanna would marry John Holley and have 8 children. Johanna would die June 29, 1910, in Chester, Illinois. (Note: Could not find her obituary.)

Thad and Sarah have a son, Andrew Davis Kent, born on December 5, 1859, born in Randolph County, Illinois. Andrew would marry Nancy Weekley and move to Commerce, Missouri. More info on their page.

Thad and Sarah have a daughter, Eliza Louisa Kent, born on July 12, 1863. Eliza Louisa would marry Charles Cornelius Pearson and have two children. Nora would die in 1900 and Charles would die in 1932. Louise would die April 8, 1939. Her obituary gives her parents as Mr. & Mrs. John Kent, which is inaccurate as it should be Mr. & Mrs. Thad Kent. Her obituary indicates she was born in Rockwood and lived her entire life there. She would later marry Charles Samuel Frazier, giving her two step-children. (Note: Find Eliza Louisa Pearson/Frazier in a directory for address in Rockwood.) 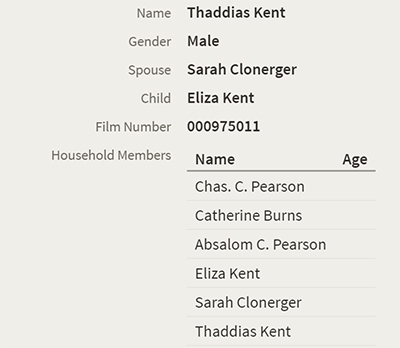 On Eliza Louisa Kent's marriage record, her mother is listed as Sarah Clonerger. Her husband's parents are Absalom C. Pearson and Catherine Burns. 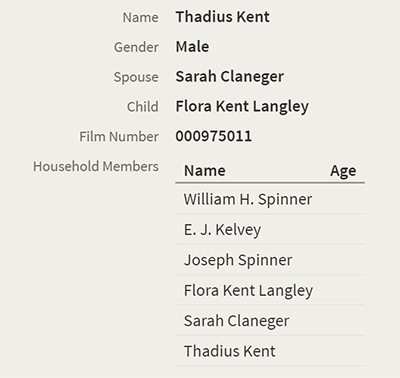 A precinct generally is a division for voting purposes. Is this the same as the township on the map below? If so, the family was living near Rockwood in 1865.

Thad and Sarah have a son, Thadeus Kent, born May 2, 1866. Thadeus Kent (Jr.) would marry Addie Johnson and have 8 children. He died on October 10, 1921. He is buried in Kent cemetery near Rockwood, Illinois. (I am searching for this cemetery because I believe his father Thad may be buried here too.) His son John Kent is listed in the Randolph County Veteran's book. (Note: Where is the "under-the-hill" section of Chester?) 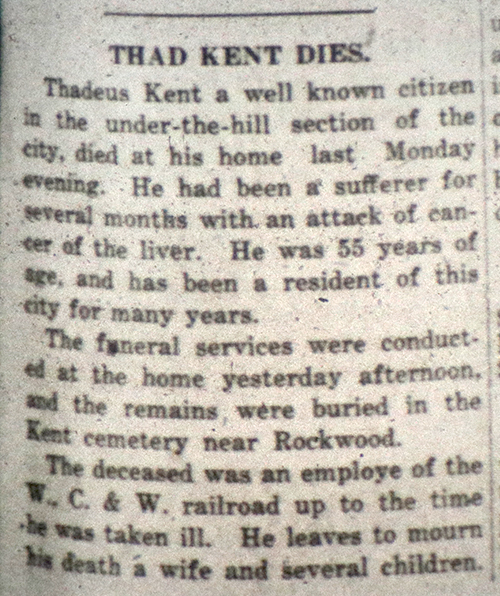 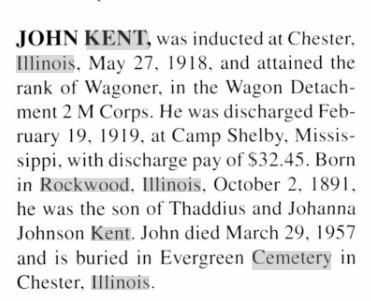 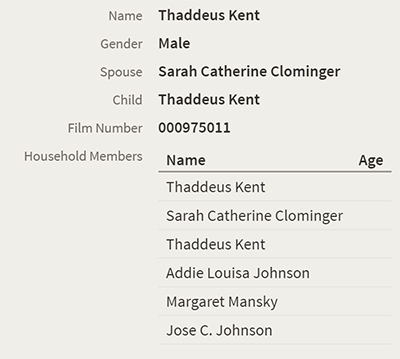 Thad and Sarah have a son, Jefferson Davis Kent | Samuel J. Kent, born August 15, 1868. I do not believe that they had twins, but rather Samuel's middle initial of "J" could be Jefferson and his name changed. There is only one name listed in the 1870 census and then it changes in the 1880 census to be listed as Jefferson. Jeff would marry Nora Ellen Johnson and have one child, Lulu Kent. Jeff would die on January 22, 1933.

In this 1875 Section Map of Randolph County, the blue box is Township 7, Range 6 of Randolph County. It is my belief that the family may have lived in the Rockwood area of the map. Thad's son Andrew would marry Nancy whose heritage of the Weekleys and the Crains is with the Mary's River Island (aka Crain's Island) and Mary's River. It would be logical that he grew up with her in this area.

In the Illustrated Historical Atlas of Randolph County, Illinois, at the Library of Congress, published in 1875 (or linked here) I do not see a "Kent" listed on the plat map.

Thad and Sarah have a son, John Pete Kent, born October 23, 1874. He would marry Belle Walters and have 4 children. They would move to New Madrid, Missouri. John died on March 19, 1948. The marriage record lists Sarah's name as Cloniger. Belle's parents are Violet Cotner and R.R. Walters. 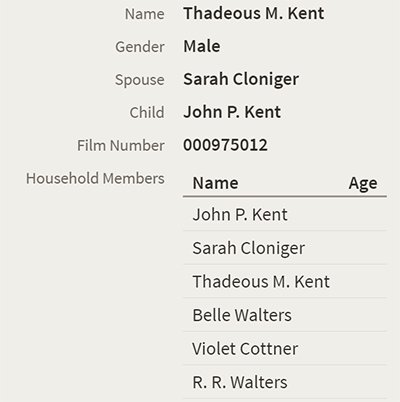 In the 1880 census, Chester, Randolph County, Illinois, District 98, Thad (56) is living a farmer and cannot write. Sarah (50) is keeping house and cannot write. Both are born in the U.S. (sure wish it listed a state). The children in the home are Flora (15), Thad (12), Jefferson (10), and John (8). Their son Andrew (19) and his wife Nancy are living next door. Their daughter Johanna and husband are living next to Andew. The street is listed as Sparta (per Ancestry transcription), but there are no house numbers.

In the July 19, 1880 Illinois Agriculture schedule, Randolph Township 8 Range 6 , indicates Thad rents for fixed money rental. There is a form here to compare the fields.

In the June 26, 1900 census, Rockwood, Randolph County, Illinois, District 0074, Thaddeus (67) is living with his daughter and son-in-law as a "day laborer, born October 1832 in Ohio. He is widowed and can read, but not write. His daughter, Louisa, (Lou)(37) has been married 1 year and has had two children. Her husband Charles (37) has one child from a previous marriage in the home, William (12). Louisa has two children from a previous marriage in the home, Nona Peirson (19) and Cornelus Peirson (18). (Note: Thad's son Pearl has a middle name of Cornelius, which may indicate this is a family name).

Sarah's death is unknown, with the last record being the 1880 census.

Thadeus Kent's death is unknown, with the last record being the 1900 census, being widowed.