John Weekley was born about 1822-1830 mostly likely in Kentucky.

The Illinois compiled marriage records indicate that John and Melissa were married on April 4, 1850.

The below record gives a film number (note, get copy of marriage record from film).

On January 7, 1853, John and Melissa have a son, William B. Weekley. He would marry a Hulda N. Miner and die March 11, 1910, in Commerce, Missouri, being buried in Oakdale Cemetery (the same location as his sister Nancy's husband, Andrew D. Kent). In the 1900 census he is age 49, a boarder, living with the wheat family in Bois Brule, Missouri. His death certificate lists his name as Weakly, divorced, and his parents as John Weakly and Melissa Craine, and Andrew Kent is the informant. William had one daughter, Mary Ann Weekly Ramsey. Mary would marry Albert Ramsey and is also buried in Oakdale Cemetery having died November 24, 1921.

In 1854, John and Melissa have a son, John Hardin Weekley. He would marry Emily Ellen Pierson and have 7 daughters.

In 1856, John and Melissa have a daughter, Matilda Elizabeth Weekley. She would marry Ben Lewis (possibly 2 children) and then Randsom Langley. Her marriage record lists her parents as John Weekley and Malisa Crain. 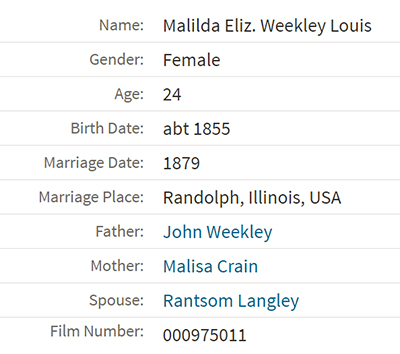 In July 1861, John and Melissa would have a daughter, Nancy C. Weekley. She would marry Andrew D. Kent.

In the Illustrated Historical Atlas of Randolph County, Illinois, at the Library of Congress, published in 1875, page 25, we find the Weekley plot on Crain's Island. Crain's Island was initially named St. Mary's River Island.