The Story of Céladon

The story of Céladon is found in the Ste. Geneveive Archives through extensive court interegations of various individuals. A movie called "Under These Same Stars - The Céladon Affair (2009)" was filmed of the story! There is a movie trailer on YouTube. It is really great for imagining how our Boyer ancestors lived in Ste. Genevieve during the 1700's. There are two articles about the movie in The Southern Illinoisian (1) and (2). I was able to obtain a DVD of the movie from the Felix Valle House State Historic Site in Ste. Genevieve. This story is also mentioned in many colonial Illinois Country themed books. Read more about Cahokia Mounds on this page. 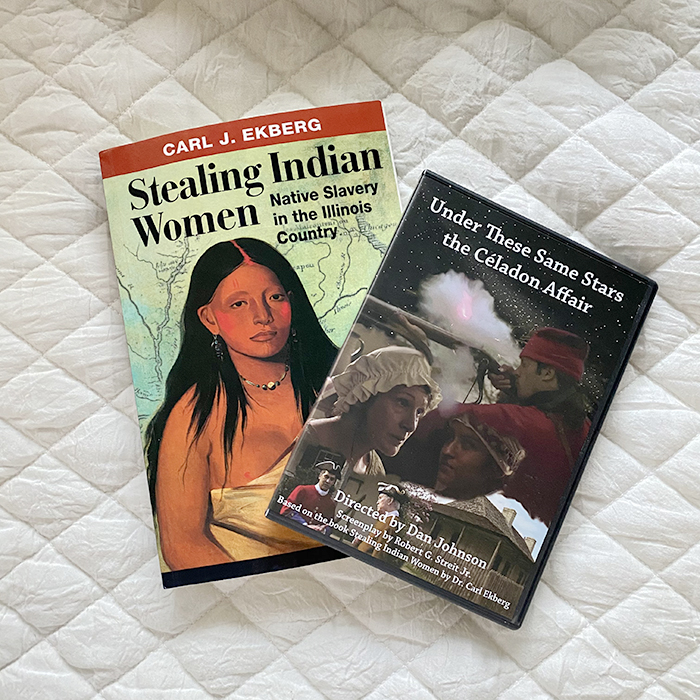 This story is set out in great detail in Carl Ekberg's "Stealing Indian Women: Native Slavery in the Illinois Country" which I was able to purchase on Amazon. Therefore, since there are many resources to learn more about this story, I will share only a brief synopsis, mostly of Charles Boyer's interview.

The Céladon story takes place between Illinois (British government) and Missouri (Spanish government) and begins with Ste. Genevieve folks, including Céladon, traveling across the Mississippi River to Kaskaskia on Sunday, March 14, 1773, to party until intoxicated. An Indian slave was stolen in Kaskaskia and later found dead in Missouri near River aux Vases (today in Ste. Genevieve County; Highway 55 passes over it). Céladon was accused of this theft and murder of an Indian woman. A series of interrogations follow regarding this incident, including one of the second Indian slave woman, as mentioned below, Marianne who is owned by the Widow Aubochon.

It would seem that Céladon and Marianne had been having an affair because on Tuesday night, April 20 into Wednesday, April 21, 1773, Céladon convinces Marianne to escape away with him, thereby Céladon being accused of a second theft of a slave. Marianne encourages her older son Jean Baptiste (age 9) to come with her, but he would not come without his brother Louis (age 5). Marianne did not believe her younger son was old enough to make the trip into the wilderness.

A second series of interrogations occur regarding the theft of Marianne, one of them being of Charles Boyer on December 21, 1773.

The location in Charles Boyer's testimony takes place at the hunting encampment of Lafitte and Charpentier along the Black River, near where the river today enters Clearwater Lake. Charles has an encounter with Céladon and Marianne. Charles had been listed on the census as an "inhabitant" which would indicate he owned agricultural land, as differs from Céladon who is a chasseur. Céladon hunted and explored the wilderness of Missouri regularly, only boarding with Mr. Larose when staying overnight in Ste. Genevieve. Part of the written story is the inventory of Céladon's belongings at the Larose home. Charles would have been participating in the Autumn hunting and trapping season, which occurred after the farming season, from September through October. Charles is hunting with Joseph Courtois, Béquet and Joliet.

Upon first seeing Charles and his hunting buddies, Céladon and Marianne hide in the woods, both with rifles, indicating that their first reaction was that of fear of capture. Then Céladon and Marianne call out to the hunters inquiring of any news at the settlement of Ste. Genevieve (regarding a criminal accusation against him). Hearing that there is none, they gather together at the camp. At camp they further discuss the first incident of theft and Céladon learns they are suspicious of him as the murderer, to which Céladon informs the hunters that it was an accident when the rifle was hung in a tree (and the Indian woman was accidentally shot in the chest).

Upon further questioning, Charles reveals that Marianne had immediately upon seeing him asked him about her children who she had left behind, showing how much she cared about her children. Charles told her that one son was living with the widow Aubuchon's daughter, Elizabeth (Aubuchon) Lasource, and the other with her son, Antoine Aubuchon, Jr.

Thereafter, Charles Boyer camps with Céladon and Marianne, and the others which reveals to us that they had a former friendship or loyal relationship in that the hunters had no fear of this alleged thief and murderer.

Charles testified that Céladon had requested that the hunters not reveal his location, threatening the hunters that he knew where their family lived.

When questioned further, Charles testified that Céladon had informed the hunters that his camp was at the "fourchettes" of the Black River, which is today near Lesterville, Missouri, likely at the confluence of the west and middle forks under the nearby Taum Sauk Mountain. Céladon had invited the hunters to his camp, but they refused to go.

The hunters and Céladon and Marianne part ways as Charles and his buddies returned to Ste. Genevieve. Vallé further questions Charles about Céladon and Marianne's horses and rifles. They had possession of two horses and two rifles. They had stolen the horses from nearby Indians and had obtained the rifles from an Indian in Cahos (Cahokia). Charles also believes that the ammunition was obtained in Cahokia.

On March 4, 1774, Vallé concludes is interrogations and the case was never fully resolved as Vallé abandoned the matter.

Charles Boyer - my ancestor who is interviewed, habitant (rather than chasseur)

Don François Vallé - Mr. Vallé is the one who interviews Charles Boyer (and the others). He was born 1716 and died 1783. After 1760, Vallé was captain of the local militia under the French government, the second-highest military position in the area. Sometime between 1776 and 1767, the Spanish government took over and he kept his position. He became a special lieutenant in the Spanish army and was awarded the honorable title of “Don Francisco." He was commandant of the post at Ste. Genevieve from 1770 until his death in 1783, at which time his son Francois Vallé II took over the position.

Céledon - a metis (half Indian); a chasseur (owned no land and hence a hunter); when in town, he boarded with Jean-Baptiste Deguire dit Larose

Béquet  - Jean-Baptiste Becquet, Sr.; a chasseur (owned no land and hence a hunter); has a son (Jr.)

Joliet - First thought goes to the Marquette-Joliet expedition in 1673, but Louis Joliet died around 1700, long before this story. I have not found another reference to a Joliet, but there are later descendants in the area with the variation of Juliett,  Juliette, and Juilliette.

Lafitte - Mathieu Lafitte, age 32; a chasseur (owned no land and hence a hunter); had a camp with Charpentier which is today on Black River near where it enters Clearwater Lake

Charpentier - possibly Francois Charpentier; had a camp with the above Lafitte.

Joseph Monansy - Not sure who this is, but there is the Moncey and Muncey surname; he is a witness to Charles' signature, possibly of the Spanish government

François Leclerc - Scribe of Francois Vallé, who was mostly illiterate, so they were a team

The Transcription of just that portion which contains Charles Boyer's testimony

Before Us Don François Vallé, Captain of Militia and Lieutenant of the Judge at the settlement of Ste Genevieve,
compared Sir Charles Boyer, son of Sir Nicolas Boyer, inhabitant of this settlement, who declared being 23 and professing the Catholic, Apostholic and Roman religion, and swore on the Gospel and promised to God, the King and Justice to say the truth about

that having answered there were none, the three of them came back together to the camp of the said Lafitte and Charpentier where they slept altogether.
Asked if the said Céledon talked about anything or asked some questions while they were together at the said

camp,
he answered that first, Céledon asked if those who found the murdered savage girl had found her right away, that the informant and the others said to the said Céledon that he was suspected to have killed her.

*that the said Céledon had told him that

he answered no, that he had not given anything to him, he was not aware of anybody having given anything to him, that the said Céledon had told him he had been to the Cahos for his supplies.
Asked if he had something else to say, he answered no and that this testimony contains the truth, that he does not want to add or remove anything, that it is as he intended to do, and that he maintains his testimony. Reading of his deposition was made to him, he declared he did not know how to sign and he made his ordinary mark, in presence of Sirs Joseph Monansy and François Leclerc, assisting witnesses, who signed with us, for lack of a notary.