THE FORMATION OF CHURCHES IN GERMANY 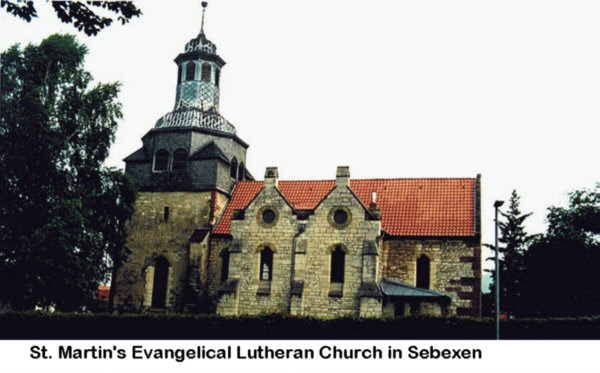 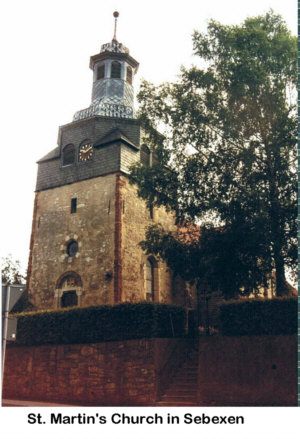 Long before August and Wilhelmine Brennecke baptized their children at St. Martin's Lutheran Church in Sebexen (Kingdom of Hannover), there were numerous changes in the churches of what is now Germany.

August and Wilhelmine Brennecke lived in the Kingdom of Hannover in the 1820's and 1830's.  The neighboring Kingdom of Prussia was a powerful growing country, including some of what is now Germany's northern territory.  The Hannover area was not part of Prussia in the early 1800's (see article on page XX), but the Prussian church history eventually influenced the organization of the church throughout Germany. Therefore, we make note of it here.

Prussian King Frederick William III (son of Frederick the Great) had been unable to receive communion with his wife because she was Lutheran and he was Reformed (Calvinist).  Therefore, the King forcibly united the Lutheran and Reformed churches in 1817 into one Prussian state church, the Evangelical Church of the Prussian Union (Evangelisch Unierte Kirche).  There was much resistance, and although he tried measures of pressure to force everyone to come to the Union Church, the result was that instead of two churches, King Frederick William III got three Protestant churches:  the Union Church,  the Evangelical Lutheran Church (Evangelisch Lutherische Kirche), and the Evangelical Reformed Church (Evangelisch Reformierte Kirche).  Protestant churches adopted the word "evangelical" as a unifying term.

Also at this time there took place a further division among the Lutherans.  As the Lutheran Protestant Church in the time of King Frederick William III had to adopt several compromises in order to remain Lutheran, it seemed to several pastors and parishes that the King's so-called Lutheran Church was no longer truly Lutheran.  Those pastors and parishes founded several small independent confessional Lutheran Churches, scattered all over Germany.  For several years they were forbidden and pursued and some people were sent to prison, but step-by-step they became accepted.  (These independent confessional Lutheran Churches eventually formed the SELK, as explained below.)

When August and Wilhelmina baptized their first child in 1825,  St. Martin's in Sebexen was an Evangelical Lutheran Church.  In our previous editions of the Brennecke History books, the term "district" was used to signify a division of the Evangelical Lutheran Church.  This word is overused when translating from German to English.  The Germans have different words for each area, but they all get loosely translated as some kind of "district."   Similarly, the word "superintendent" is also loosely translated.  This is a clearer picture of the organization of the church today:  The church consists of one "diocese" headed by one elected "diocesan bishop".  The diocese is divided into "episcopal areas" supervised by "suffragan bishops" (appointed for life by the diocesan bishop and the diocesan senate), who assist the diocesan bishop. Within the suffragan bishops' areas are "deaneries", headed by an appointed "dean". Each deanery has a dozen or so "parishes". A parish has one or more churches under a single "pastor".

Ernst August inherited the throne of the Hannover Kingdom in 1837 (see history article on page xx).  In 1840, St. Martin's in Sebexen was a part of the Deanery of Willershausen, which was administered by a deanery office in Osterode.  At the highest level was the King of Hannover, who was also the head of the Lutheran State Church of Hannover.  Because of King Ernst August's initial harshness, church-meddling, and pro-Prussian leanings, many of the King's subjects chose to emigrate to America at that time.  August and Wilhelmina Brennecke, their children, and neighbors were a part of this group that came to America in 1844.

There were two main religions in Germany - the Protestant Church (Evangelisch Kirche) and the Roman Catholic Church (Römisch-Katholische Kirche).  When Hannover and other German states were annexed by Prussia in 1866, the King of Prussia became the Head of the Church of Hannover, as well as head of the other state churches. This lasted until World War I ended in 1918 when the monarchy was abolished in Germany.   The churches were no longer governed by state laws but still received state support.

In 1925 the Diocese of Hannover got its first diocesan bishop. In 1933, a national organization, the German Evangelical Church, was formed to develop a national racial church that was under the direction of the Nazi party.   This was revolted against, resulting in the founding of the Confessing Church in 1934.

After World War II ended in 1945, the Catholic Church continued to maintain a single structure.  The Protestant churches agreed to form a top-level federation of the principal protestant Churches in Germany.  This federation, the Evangelical Church in Germany (Evangelisch Kirche in Deutschland) (formerly abbreviated EKiD, nowadays it is abbreviated EKD) (see their website at http://www.ekd.de) was formed of Lutheran, Reformed, and Union churches.

The EKD is separated into regions. The Protestant Church selected in each region (Land) is called the "Landeskirche."   The regions can be seen at http://www.ekd.de/english/1562.html.  You can click on each region of the map to see which Protestant religion is in that region.  There is a total of 24 regions.  Nine regions are named  "Evangelical Lutheran Church," thirteen regions are named "Evangelical Church," one region is named "Evangelical Reformed Church," and the last one is named "Church of Lippe." The Catholic Church has a parallel singular organization in Germany.  For example, in the large predominantly-Catholic state of Bavaria, there are seven dioceses, each headed by a bishop.

The Evangelical Lutheran Church in Germany is represented by the Vereinigte Evangelisch-Lutherisch Kirche (VELKD) which was formed by those church bodies of the EKD which call themselves Lutheran.  In other words, the VELKD is a part of the EKD.  The nine (as aforementioned) Landeskirchen which belong to the VELKD, are: Hannover (http://www.landeskirche-hannovers.de/),  Bavaria, Brunswick, Mecklenburg, North Elbian, Oldenburg, Saxony, Shaumburg-Lippe, and Thuringia.  All churches which belong to the VELKD also belong to the EKD, along with the Union Churches and Reformed Churches.

St. Martin in Sebexen, St. Martin's in Rhueden, and St. Georg's in Willensen are all part of the Evangelisch-lutherische Landeskirche Hannover (http://www.landeskirche-hannovers.de/), a subdivision of the VELKD, which is a subdivision of the EKD.  The Evangelisch-lutherische Landeskirche Hannover is divided into deaneries, headed by a dean (or superintendent).  The aforementioned churches are part of the Osterode Deanery.  The deanery offices have duplicate records of the parish books.

Sometime before our ancestors emigrated, the St. Martin's Church in Sebexen had ceased to be a parish of its own and was combined with Our Lady's Parish of Kalefeld because there was only one pastor for both parishes.  It was part of the deanery of Willershausen, which was administered by a Lutheran Deanery office in Osterode.  In recent years, St. Martin's of Sebexen was combined with St. Peter's Parish of Duederode and St. Simon & Jude's Parish of Wiershausen, with one pastor for them all.

In 1972, the several small independent confessional Lutheran Churches, as aforementioned, formed the Independent Evangelical - Lutheran Church (Selbständige Evangelisch-Lutherische Kirche) (SELK) (http://www.selk.de/)   In 1991, the Evangelical-Lutheran (Old-Lutheran) Church (Evangelisch-Lutherische (altlutherische) Kirche) in the former German Democratic Republic (East Germany) (GDR) joined the SELK, as this was not possible before East and West Germany were unified.

Today, the EKD has about 25 million members of which 10 million also belong to the VELKD. The SELK, which belongs neither to the VELKD nor to the EKD have less than 40,000 members.