Franklin Windeknecht and Missouri May O'Guin

Frank and Missouri May Windeknecht.

In the August 26, 1870 Census, Cape Girardeau County, Randol Township, Frank was 3 years old. His father Philip is 47 years old, a farmer, who owns real estate valued at 1500, and personal property valued at 475, from Hannover. His mother Louisa is 40 years old, keeps house, and is from Brunswick. His siblings in the home are Phillip (17), Rosena (14), Ferdinand, (11), Paulina (7). Phillip, Rosena, and Ferdnand are marked as having attended school. Other researches have concluded that his oldest sister, Louisa, passed away between the 1860 and 1870 census (in 1870, being born about 1851, she would have been 19--old enough to have been married.) His Uncle Henry lives next door.

That's Frank standing next to the horse, with his brother Phillip Jr on the horse, his parents Phillip and Louisa next to him, and an adopted "Hictchcock" on the end. This home stood at the entrance to Trail of tears State Park, near Cape Girardeau, Missouri. It was built on land homesteaded by Phillip Windeknecht, Sr. when he arrived from Germany.

In the June 3, 1880 Census, Cape Girardeau County, Randol Township, 026 numeration district, Franklin is 13 years old. His father Phillip is 57 years old and is a farmer (there is a line through the occupation field, and the transcriber equats this to "ditto."), from Hanover. His mother Louisa is 51 years old, keeping house, from Hanover. His siblings in the home are Phillip, Jr. (27, farmer), Ferdinand (21, farmer), Paulina (15), and Hitchcock (8, female, adopted), born about 1872). (Note: the name Hitchcock begin further left than the other children's names, indicating a last name.) Uncle Henry Windechnect is living next door.

This census helps to date the above photo with Phillip Jr. on the horse, Frank next to him, Phillip Sr. and Louisa, and Hitchcock., appears to be in her late teens or 20's, making this photo possibly taken probably between 1888 and 1900.

In the June 15, 1900 Census, Cape Girardeau County, Randol Township, District 0031, Frank is listed twice, once with his parents and again with his wife and family.

Frank must be caring for his aging parents at the age of 30, born June 1870, with an occupation as farm hand. His father, Phillip is 77 years old, born May 1823, and has been married 50 years (putting their marriage in 1850), a farmer, born in Germany, naturalized, can read, write, and speak English, owns his home mortgage free, and farm scheduled 159. His mother Louisa is 70 years old, born August 1829, and can read, write, and speak English. It indicates number of children born as 1 and living as 1, which is incorrect and most likely misunderstood as 1 living in the home. (Note, there is Perry and Tena Hitchcock (transcribed as Kitchcock) living next door. Perry is born in 1874, 2 years before the adopted Hitchcock in the 1880 census, indicating a possible brother) His brother Phillip Jr. is living two doors up and married. His brother Ferdinand is living two doors down and married. On the next page, his sister Rosie is living next door to Ferdinand, and then Frank is listed again living next door to Rosie.

On July 18, 1901, Frank (34) and May (24), have a son, Earl Calvin Windeknecht born near Egypt Mills. Click to read obituary. Earl would die at the age of 27 on October 2, 1928 of blood poisoning setting in as a result of an infection developing in his throat following an attack of diphtheria several weeks prior.

On June 13, 1904, Frank (37) and May (27), have a son, Frank Phillip Windenecht., born near Egypt Mills, Missouri. Frank Jr. would marry Zelma Catherine Damron , worked at the International Shoe Company for 33 years, was a salesman with Raleigh Co 12 years, then farmed, had no children, and lived to the age of 88 years. Click to read obtiuary.

In the April 30, 1910 census, Cape Girardeau County, Randol Township, District 0028, Frank is 43 years old, married 13 years, and a farmer, owning his own farm mortgage free, with a farm schedule of 104. May is 33 years old, married 13 years, has had 6 children and 6 children are living. Her father is born in Tennessee and her mother is born in Missouri. Their children in the home are Mana (12), Wilson (11), Earl (8), Frank Jr. (5), Charly (3), and Maggie (3/12 months). Mana, Wilson, and Earl have attended school. Also in the home are his parents, Phillip (86) and Louisa (79) having been married 60 years. Phillip immegrated in 1843 and Louisa in 1845. Louisa has had 7 children, with 4 living. Living next door is brother Ferdinand. Living next door to Ferdinand is cousin Henry Windechnect, III. Brother Phillip Jr. is on the census page before, living nearby.

On July 5, 1912, Frank (45) and May (35) have a son, Lester Eugene Windeknecht., born near Oriole where he spent his entire life. Eugene drowned by suicide in a pond on the farm home near Oriole on August 10, 1958. Click to read obituary. His death certificate indicates drowning with a contributing factor of psychoneurosis. He suffered from inner struggles and stresses as a result of the family's home land being forced as a buy-out for the Trail of Tears State Park.

On January 2, 1915, Frank (47) and May (37) have a twin daughter, Erma Lillian Windeknecht. Lillian would marry Chester H. Farrow and live to be 58 years old. She had one son. Click to read obituary.

Frank and May twin daughter, Irma Vivian Windeknecht on January 2, 1915, who lives to the age of 18 months.

On February 1, 1918, Frank (50) and May (40) have a son, Hercell Claude Windeknecht., born near Egypt Mills, was a farmer, and resided in the Oriol community most of his life. Hercell would live to be 42 years old when on February 10, 1960, he died of suicide by hanging at his brother Frank Jr.'s home on North Sprigg. His death certificate indicates how the injury occurred: "put rope over ceiling joice, tied and neck and arm; and applied. pressure." Like his brother Eugene, it is family history that Hercell also suffered from inner struggles and stresses as a result of the family's home land being forced as a buy-out for the Trail of Tears State Park. Click to read obituary. (death certificate)

In the April 23, 1930 census, Cape Girardeau County, Randol, District 0028, Frank is 63 years old and May is 52 years old. There is a typo in that Frank is marked as having been married 30 years and May is marked as having been married 20 years. Frank is a farmer with a schedule of 157. He is not a veteran. Also in the home are their children Maggie (20), Eugene (17), Lillian (15), and Hershal (12). Eugene and Hershal's occupation is also listed as farmer.

In the April 15, 1940 census, Cape Girardeau County, Randol, the family is living on Greensferry Road, but no house number is listed.

The Southeast Missourian, Cape Girardeau MO, Jan. 29, 1948
Mrs. M. May Windeknecht, 70 years old, a lifelong resident of the Egypt Mills community, died at 7:40 a.m. today at the family home. She had been in failing health the past seven years but her condition did not become serious until a week ago when she suffered a stroke of paralysis.
Funeral services will be held at 2 o'clock Saturday afternoon at the Haman Funeral Home with Rev. M. A. Garrison of the third Street Methodist Church in charge. Interment will be in the Iona Cemetery near Oriole.
Mrs. Windeknecht is survived by her husband, Frank Windeknecht, a farmer; five sons, Wilson Windeknecht, Frank Windeknecht Jr., Charles Windeknecht, who reside in Egypt Mills community and Eugen and Hercell Windeknecht, at home; two daughters, Mrs. Pearl Kent of near Egypt Mills and Miss Lillian Windeknecht, at home; a brother, John O'Guin of Holden; four sisters, Mrs. Price Knight and Mrs. Arthur Wright of Commerce and Mrs. Oral Cummings and Mrs. Harry Rasberry of Cape Girardeau, 26 grandchildren and three great-grandchildren.
Born April 7, 1877 near Leemon, Mrs. Windeknecht was married March 25, 1897. She was a member of the McLain's Chapel.

Frank died October 14, 1958, at the age of 91 years, of coronary heart failure, hypertension, and complication and senility. It sounds like he died of "old age." (Death Certificate)

Frank Windeknecht, 91 years old a lifelong resident of the Egypt Mills community and a retired farmer, died Tuesday night at 8:15 at the home of his son-in-law and daughter, Mr. and Mrs. Chester Farrow of Egypt Mills. Final rites will be conducted Thursday afternoon at 2 at the Haman Funeral Home by Rev. Ray Barnes of the Iona Baptist Church. Interment will be in the Iona Cemetery. Mr. Windeknecht is survived by six children, Mrs. Pearl Kent, and Wilson and Frank Jr. Windeknecht of Cape, Charles Windeknecht of Jackson, Mrs. Farrow and Hercell Windeknecht at home; 25 grandchildren and 26 great-grandchildren. three brothers and two sisters preceded him in death. Born March 23, 1867, in the community, he married Missouri O'Guin on March 25, 1897 who died Jan. 29, 1948. 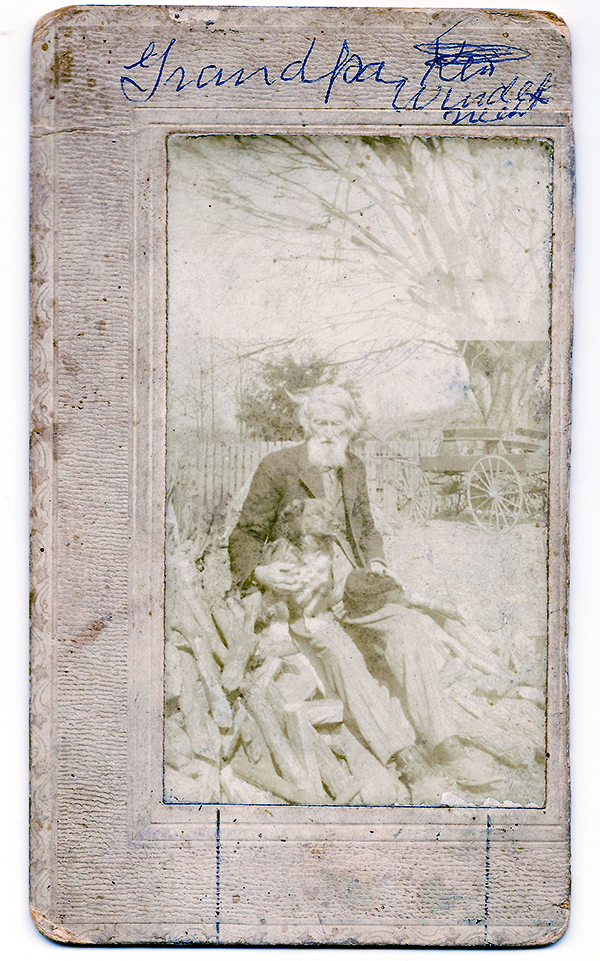 Franklin Windechnecht sitting on a pile of cut wood, with a dog in one hand and a cap in the other hand. There is a wooden fence in the background as well as a carriage. His hair is long and appears to be blowing in the wind.

Below is a close up of the above photo. 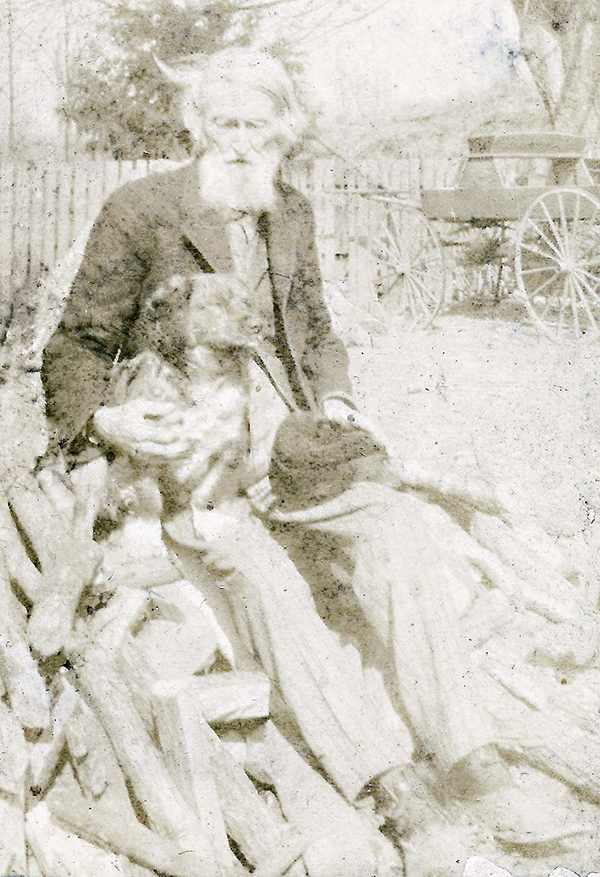