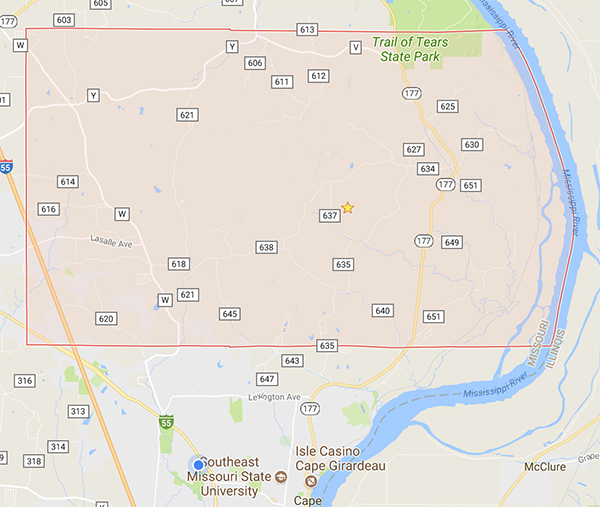 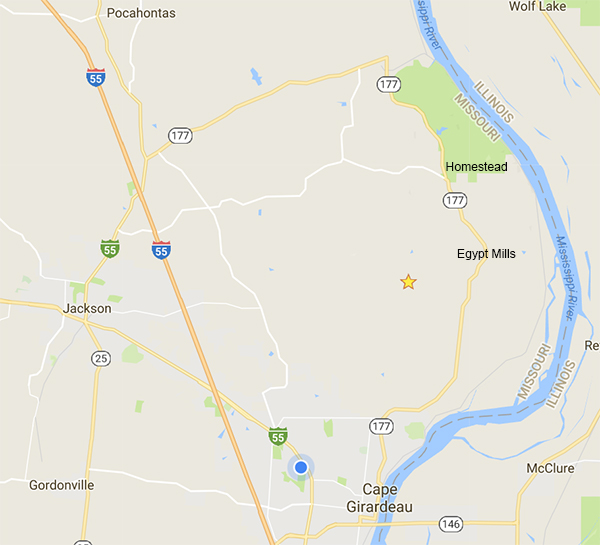 Click to see larger image. In the 1920 and 1940 census, Frank Windeknecht is living on Greensferry Road. The only current Greensferry Road is in Jackson, Missouri. This was confusing until I learned about the importance of Green's Ferry Road and the Trail of Tears. Greens Ferry Road is named as such because of Green's Ferry which was utilized by those on the Trail of Tears to cross the Mississippi River. Greens Ferry Road was the trail which they took until they encountered New McKendree Chapel in Jackson. I have highlighted what used to be Greens Ferry Road which begins with Moccasin Springs through the Trail of Tears State Park and continues on Route V and then Route Y, and finally to Greensferry Road today. There were two ferries (or three depending on where you read because there is mention of an upper Green's Ferry and a lower Green's Ferry) utilized to cross the Mississippi River. The second was Bainbridge Ferry. I have made a highlight of the path taken to join the other group at Greens Ferry Road. As one reads on the internet, there are multiple names for the ferries based on the surname of who owned the ferry. These ferries were sold often and renamed often. I have included these other names on the map .

Therefore, the entrance to what is now Trail of Tears State Park where Phillip lived, as well as where the conservation building is located on what is now Moccasin Springs Road, are both on Greens Ferry Road. When were the roads renamed? Most likely in the 1960's.

The small highlighted X is the approximate location of the brothers in 1842. I put this on the map to help us gain perspective. It is a well known story that Henry found two Indian children under a bush, often told to be during the Trail of Tears march. When this story is told, one immediately thinks of just the park area, but in 1838-39, the "trail of tears" was the entire route highlighted in blue. I have read about how friendly and polite the Indians were and can imagine that it was such a visually impactful event that those living in the area would have traveled to witness the event. Our Henry and Phillip, who were certainly living in the area during the march, may have witnessed the event directly north of where they lived, or closer to the Jackson area, or really anywhere on the highlighted path. These two Indian children could have been found anywhere in the area, not necessarily on the park property of today. Whether these children were found in 1838-39 or at a later date, it is certain that these brothers were so extremely impacted as a witness that it carried with them the rest of their life, even as they later purchased the land that would later be forced at sale from them to establish the park.

In the 1842 Cape Girardeau County Tax Assessment, Henry Windeknecht is taxed for land No. 2277 of survey, being 180 acres, 1 horse or mule, and 6 cattle. On the same page is another man in the same survey number, which indicates that Henry did not live on the entire area of No. 2277. The tax page copied is only one page, so there may be other individuals. Adding together 480 and 160, these two individuals have 660 acres in survey number 2277. Being as 2277 did not take up the whole Section 14 (a section being 640 acres), there could not be 660 acres. In addition, I note that the "value" field for the acres is not filled in. It would be a guess that Mr. Wise (Weiss) owned the 480 acres and Henry rented part of it for farming. 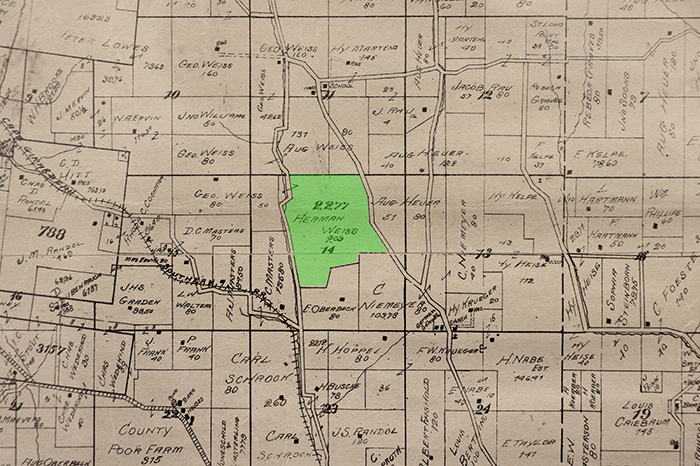 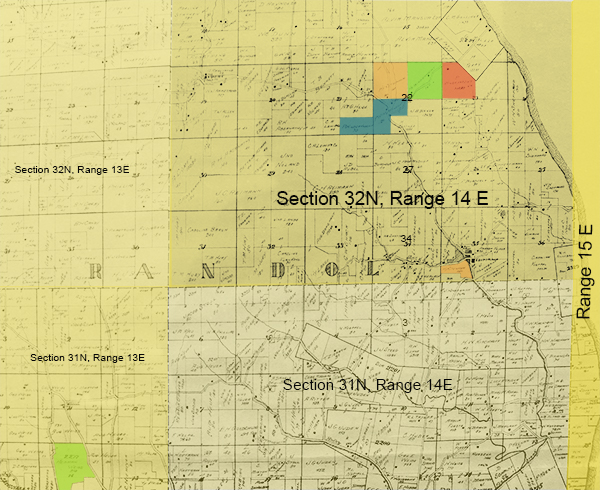 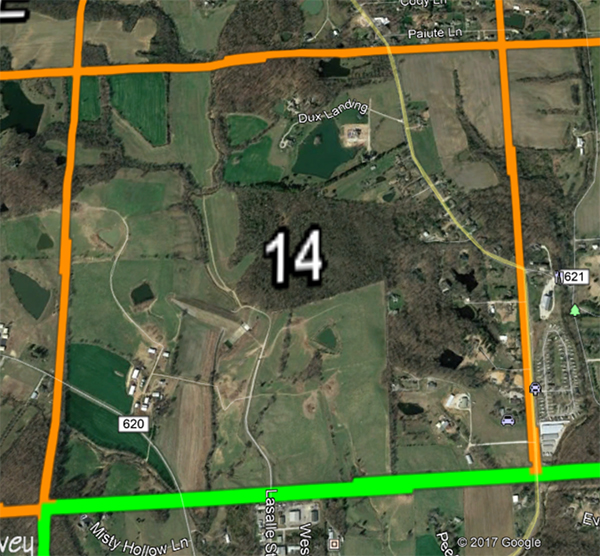 In Google Earth, with a section overlay applied, we see where this section is located today. 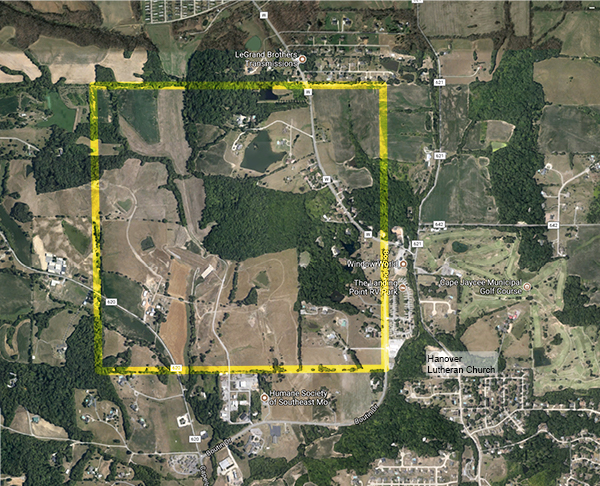 Using the Google Earth information, the Section 14 is within the yellow square on this map. I have marked Hanover Lutheran Church because Phillip and Louisa were married here on November 22, 1849. A Section is 1 square mile (640 acres). Therefore, we can see just how close the church was to where the family was living in 1842, and most likely 1849 and beyond. 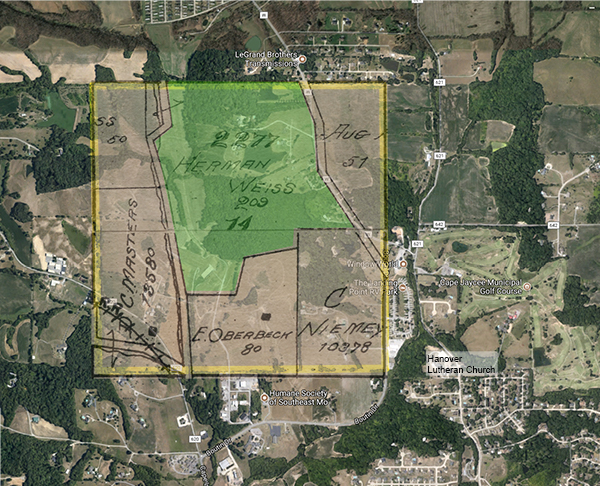 Click here for this map larger. This map adds an overlay of the 1901 plat map. The road on the right is certainly Route W, but the road to the left seems to have changed or the 1901 map is not quite to scale. Lasalle Street comes up from the bottom middle and into the green highlight. Off of Route W on the north end is Dux Landing. County Highway 620 cuts through the bottom left corner. It appears to be a railroad track in the 1901 map.

The staff at the Cape Girardeau County Recorder of Deeds is very helpful. However, to locate older deeds, there is no electronic index. One must look through the Inverted Index to Deeds, by year, to locate applicable Deeds. It does go by quicker than expected, being as for each year the index is kept alphabetically. Therefore, such as in our case, one only has to go through the W's of each year. When an entry is discovered, then another book is pulled out to look at the actual deed. The inverted indexes do list the short legal description which is often enough for genealogy purposes. It is rather delightful to hold these old original books in hand.

Click to open a larger image of the 1868 Deed Index showing two purchases by Henry and one purchase by Phillip, together on one page.

Henry bought two parcels of property in 1867. The first is from Samuel T. Coker, Curator (aka Guardian) of Elizabeth and Eliza Tanner and Randolph Hale. The second is from Sarah Ann Hubbard and Edward Hubbard.

Click to see Deed from Coker to Henry Windeknecht. There are some written error confusions. The 1868 is written over as 1867. The first date has a blank for the day, but the second date is December 17, 1867. Therefore, the land was sold on December 17, 1867, the Deed was executed before a Notary on February 14, 1868, and was recorded on April 27, 1868 (see recording at top of next Deed page below). Henry purchased the land as the highest bidder for $485.

Click to see Deed from Hubbard to Henry Windeknecht. This land is sold on the separation of the Hubbards as the wife's non-marital property before their marriage. Henry purchased this property for $300. The Deed is dated September 6, 1867, and recorded April 27, 1868 (see recording at the top of next Deed below to Phillip).

On the same date in 1867, Phillip also purchased land from Sarah Ann Hubbard and Edward Hubbard.

Click here to see Deed from Hubbard to Phillip Windeknecht. This land is sold on the separation of the Hubbards as the wife's non-marital property before their marriage. Phillip purchased this property for $400. The Deed is dated September 6, 1867, and recorded April, 1868. 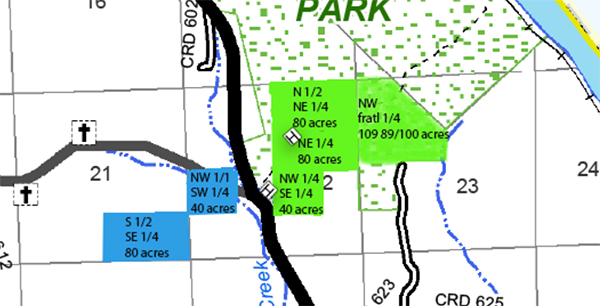 This is a combined map of all three properties purchased in 1867. Note the blocks with an "H" inside for "home." Phillip purchased the land his home was located on in 1867. Henry did not.

The green highlight are locations for Henry Windeknecht. The lower area is the location of his home in 1842, now in 1901 owned by Herman Weiss.

The blue highlight is the location for Phillip Windeknecht.

The red highlight is for Phillip's son, Phillip Windeknecht, Jr.

In the 1900 census, Phillip's son Frank is living with him and also next door to him. His son Ferdinand is also living nearby. 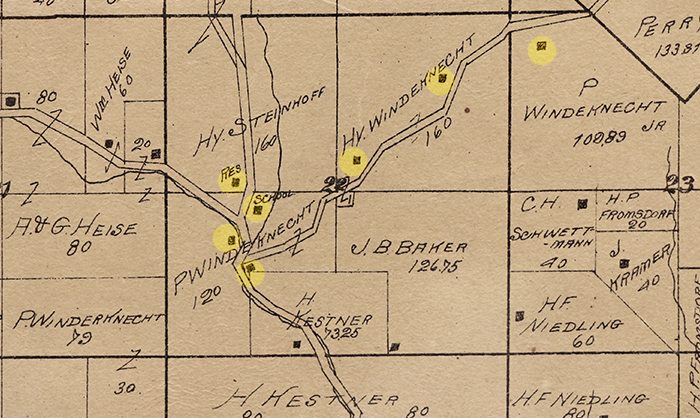 There are tiny squares on the plat map indicating where buildings stood. Henry Steinhoff's has "res" written above it. The northern square for Phillip has "school" written over it. I wonder the name of the school and the teacher. There are two other residences on Phillip's land (assuming where Frank and/or Ferdinand lived), across the street from each other, and two residences on Henry's land, and one on Phillip, Jr.'s land. On today's map, the road into the park is Moccassin Springs which leads to the Missisippi River. The main road is 177 on both the north and south ends. The road through Henry Steinhoff's land is non-existant. 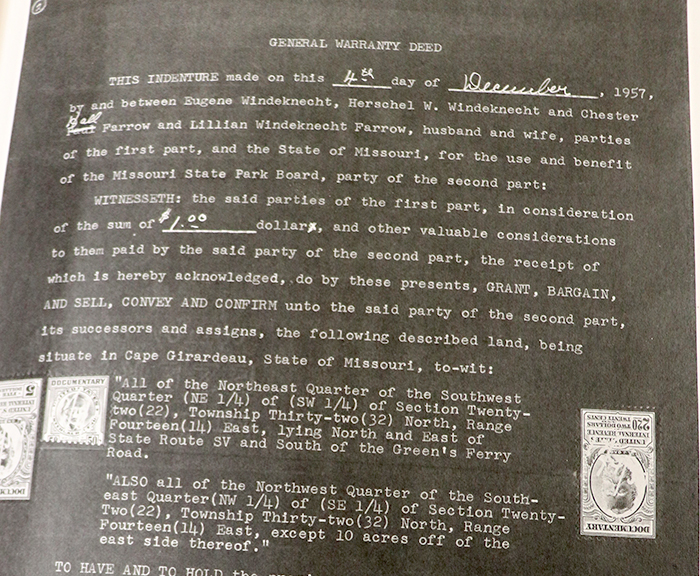 On December 4, 1957, (three of) Frank Windeknecht's children, Eugene, Herschell, and Lillian (along with Lillian's husband, Chester Hall Farrow) deeded land to the Missouri State Park Board. 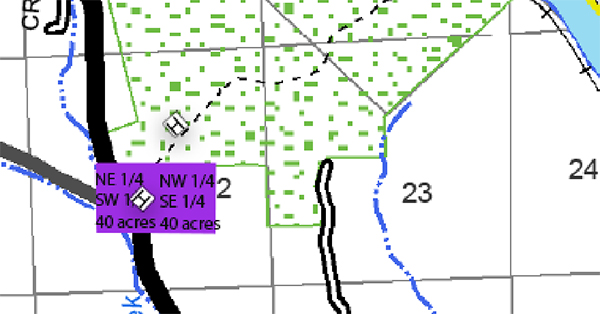 This is the location of the property Frank's children deeded to the Park Board in 1857. It includes the land where the home stood at what is now the entrance to Trail of Tears State Park.

See Frank's page for the death certificates, obituaries, and photos of Eugene and Hercell. The brothers suffered from inner struggles and stresses as a result of the family's home land being forced as a buy-out for the Trail of Tears State Park.

Eugene would live to be 47 years old when he drowned by suicide in a pond on the farm home near Oriole on August 10, 1958 (8 months, 6 days later). It is said that the pond was shallow enough to sit in with one's head still above water and that Eugene sat down and bent over at the waist to put his head under water.

Hercell would live to be 42 years old when on February 10, 1960 (2 years, 2 months later), he died of suicide by hanging at his brother Frank Jr.'s home on North Sprigg. His death certificate indicates how the injury occurred: "put rope over ceiling joice, tied at neck and arm; and applied pressure."

11/24/2017 I spoke with Judge Marybelle Mueller who recently had her 90th birthday. Judge Mueller shared with me her memories. The brothers were the only two that would not sell their land because it was the only place they had ever lived. The other owners agreed to sell. The State was offering the brothers a large and fair amount of money, but the only thing that mattered to them was the land. It was Judge Mueller's impression that those that "lived in the hills" did not get out and about and, therefore, were less social. A guardianship action in probate court was brought against the brothers to determine them unfit mentally to make the decision to sell their land. Judge Mueller was the Judge in the guardianship case. It was through this guardianship action that the land was sold. After Eugene drowned himself, Judge Mueller was fearful that Hercell also would do something, so she signed an order to commit him to Farmington State (mental) Hospital. He was in the hospital for quite a period of time when after testing they determined him mentally stable. It was only a few days after he left Farmington that he hung himself. Judge Mueller had a memory that it was on the back porch where Hercell hung himself. Judge Mueller indicated that Dr. Kamath (Dr. Prabhakar S. Kamath) was the psychiatrist in the matter and he is also living.

The land on the right is the land sold to Missouri State Park Board. The land to the left is where Hercell (and I am guessing Eugene) moved after the sale. The cross icons indicate cemeteries; the upper cemetery is Iona Cemetery where many of the Windeknecht family are buried.