The family lived at the entrance of what is now Trail of Tears State Park located on the Mississippi River where the Cherokee crossed the Mississippi River from Ware, Illinois into Missouri during their forced removal during the winter of 1838 and 1839. On a gedcom I acquired around 2000, there is a note of a resource "she told me" that Phillip came to America in 1837. I believe this is true (see below), Phillip would have been 14 years old and his brother Henry would have been 20 years old. With Phillip's young age, it would have been likely that the brothers would have been living together for a period of time. Therefore, the story regarding the family adopting two children found crying would have been part of both Henry and Phillip's history. Based on Henry's declaration of naturalization, it would place the brothers in America before March 2, 1836. Phillip would have been 13 years old when he came to America with his brother who was 19 years old.

As indicated in the 1910 census, Phillip immigrated in 1843 (age 20) and Louisa immigrated in 1845 (age 15). I believe this to be inacurate based on the naturationzation papers below. Did Louisa come with anyone? 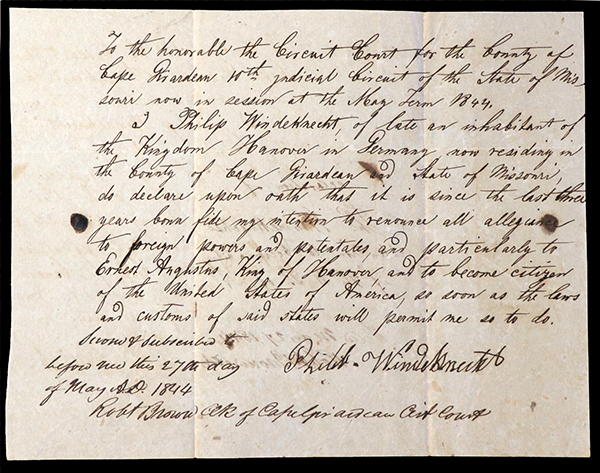 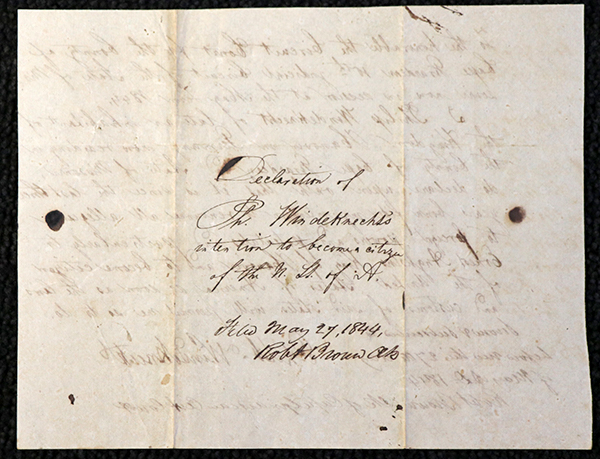 On May 27, 1844, at the age of 21 years. Phillip completed his Declaration of Naturalization on the same day that it was granted (per local indexes)

Per the 1790 naturalization laws, the two-step process took 5 years. After being in Ameria 2 years, a Declaration of Intent could be filed. After an additional 3 years, a Petition for Naturalization could be filed. One exception between 1824 and 1906, was that minors who had lived in America 5 years before their 23rd birthday could file for both the declaration and petition at the same time. This seems to have been the case for Phillip.

A person under age 21 could automatically become a naturalized citizen upon the naturalization of their father. Since Phillip waited until he was 21, this would indicate his father had not come to America and he applied as soon as he was able just 20 days after his 21st birthday.

Phillip would have had to have been in America 5 years prior, being before May 27, 1839. This would make the 1910 census information inaccurate and the verbal note of 1837 arrival more accurate. 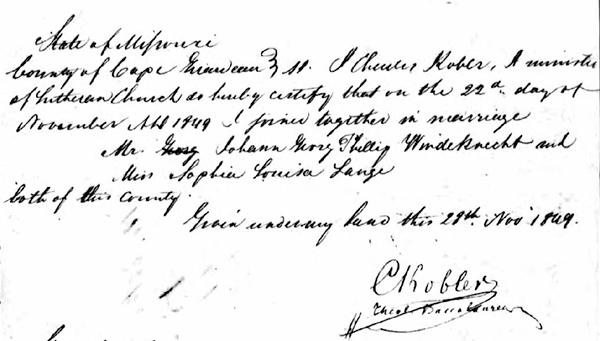 In the September 9, 1850 Census, Cape Girardeau County, Missouri, District 14, page 382, Phillip Windeknecht is 27 years old, a farmer, who owns real estate valued at 200, and his place of birth is Germany. Louisa is 20, also born in Germany. His brother Henry is listed on page 384.

In the U.S., Civil War Draft Registrations Records, 1863-1865 records, Phillip is age 40, residence of Randol, farmer, born in Germany. His former military is listed as "30 day EMM." (Enrolled Missouri Militia, 56th Regiment Cape County | Phillip was a private and his brother Henry was a Sergeant) Since Phillip is 40, the registration occurred in 1863.

In the 1868 Missouri State Census, it lists Phillip, Louisa, Phillip Jr, Rosena, Ferdinand, Paulina, and Frederick. The scanned images are off and I cannot match up the lines for the listings of information, even on the next page.

In the August 26, 1870 Census, Cape Girardeau County, Randol Township, Philip is 47 years old, a farmer, who owns real estate valued at 1500, and personal property valued at 475, from Hannover. Louisa is 40 years old, keeps house, and is from Brunswick. Their children in the home are Phillip (17), Rosena (14), Ferdinand, (11), Paulina (7), and Frank (3). Phillip, Rosena, and Ferdnand are marked as having attended school. Other researches have concluded that their oldest daughter, Louisa, passed away between the 1860 and 1870 census (in 1870, being born about 1851, she would have been 19--old enough to have been married.) Brother Henry lives next door.

In the June 3, 1880 Census, Cape Girardeau County, Randol Township, 026 numeration district, Phillip is 57 years old and is a farmer (there is a line through the occupation field, and the transcriber equats this to "ditto."), from Hanover. Louisa is 51 years old, keeping house, from Hanover.

This census helps to date the above photo with Phillip Jr. on the horse, Frank next to him, Phillip Sr. and Louisa, and Hitchcock., appears to be in her late teens or 20's, making this photo possibly taken probably between 1888 and 1900.

In the June 15, 1900 Cense, Cape Girardeau County, Randol Township, District 0031, Phillip is 77 years old, born May 1823, and has been married 50 years (putting their marriage in 1850), a farmer, born in Germany, naturalized, can read, write, and speak English, owns his home mortgage free, and farm scheduled 159. Louisa is 70 years old, born August 1829, and can read, write, and speak English. It indicates number of children born as 1 and living as 1, which is incorrect and most likely misunderstood as 1 living in the home. Their son Frank is in the home at age 30, born June 1870, with an occupation as farm hand. (Note, there is Perry and Tena Hitchcock (transcribed as Kitchcock) living next door. Perry is born in 1874, 2 years before the adopted Hitchcock in the 1880 census, indicating a possible brother) Son Phillip Jr. is living two doors up and married. Son Ferdinand is living two doors down and married. On the next page, daughter Rosie is living next door to Ferdinand, and son Frank is living next door to Rosie. Note, their son Frank is listed twice, living with his parents and then living with his wife and family.

From the Jackson Herald, Thursday July 8, 1909, in the real estate transation section.

Phillip died (death certificate) June 21, 1919, at 6:20 a.m., at the age of 96, 1 month, and 14 days. The cause of death is senility (aka infirmities of old age). His occupation was cigar maker. (Note: as a farmer in the census, did he grow tobacco.) His father is Henry Windechnecht and his mother is unknown. Son Ferdinand is the informant living in Neely's Landing. Phillip was buried in Lange Family Cemetery, Egypt Mills, Missouri. on June 22, 1919.

Philip Windeknecht, probably the oldest resident in Cape Girardeau county, died at 6 o'clock Friday evening at his home near Egypt Mills at the age of 98 years. He had been very feeble for several years and in the last few weeks his condition had become so poorly that the end was expected at any time.
The funeral was held this afternoon at the family home at 2 o'clock with the Masons in charge. He had been a member of the Masonic lodge more than 50 years. Burial took place in the Lange cemetery.
With the death of Mr. Windeknecht another of the pioneers has been called. When he came to this county the entire lands were covered with forests and Indians were roaming about. That was 80 years ago. He cleared his own land and spent the rest of his days on it.
Mr. Windeknecht was born in Germany and came to America when 18 years old. Others from his native land had come to this country a short while before, so he came direct to this county to settle down. He served in the army during the war.
Mr. Windeknecht is survived by four children, three sons, Phillip, Fred and Frank and one daughter, Mrs. Henry Steinhoff. All of them reside in the north end of the county.
The death of Mr. Windeknecht is the fourth to occur this week among the pioneer citizens of the county. Louis Bertling, 75, passed away Tuesday,Miss Julia Reynolds, 76, followed on Thursday and Mrs. Anna Jane Leggitt, 82, died Friday morning.

They owned the property which was bought by the state to develop Trail of Tears State Park.