The Windeknechts & Trail of Tears 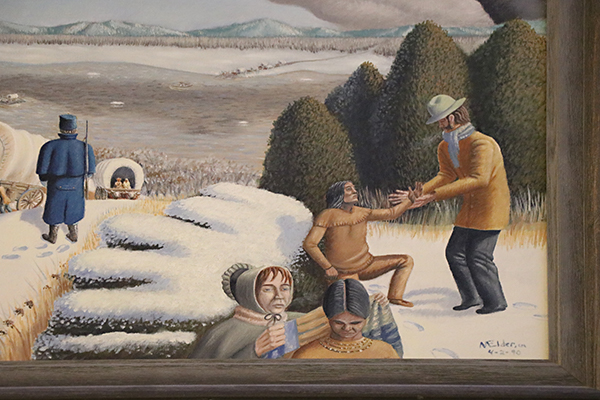 There is a mural entitled "Charity Along the Trail of Tears" by Brother Mark Elder, artist, at Trail of Tears State Park which includes in it a Windeknect story. On the far right of the mural is a photo of Mr. and Mrs. Henry Windeknecht: This couple finds and adopts a pair of Cherokee children (brother and sister), who had been hiding in the underbrush just off the trail. (It would seem the children are too old in the painting.)

The story has been passed on as an accounting among the Windeknecht decendants for as long as anyone can remember. The story includes that the children were left behind during the Trail of Tears march, but the puzzle pieces have not all been found as of yet. The Trail of Tears march came through this park location in the winter of 1838-1839. I believe the story is truth, but the facts are yet to be confirmed.

Expert from Ms. Exler's book "Tears of the Trail":

Her grandmother was a full-blooded Cherokee and was left, along with her four year old brother, on the river bank by the Cherokees as they were moved out on the Trail of Tears. Many of the family had died, and the children were hiding under some bushes. They were crying when found because they were afraid and hungry.

Henry Windeknecht found them, and he and his wife raised them. Mrs. Stone said that her great-uncle went to Texas, and her mother lost track of him. She does not remember her grandmother's name, and her mother died when she was 14 years old. Mrs. Stone had this information with names written in a family Bible which was stolen from her father's home.

I found this information online, submitted by a "Marty":

Addie Lee and her brother Ed were found wandering along the Trail of Tears river bank by the Windeknecht family. Addie Lee is listed as the adopted McCormick daughter of Hy and Ettie Windeknecht on the 1900 census. She married Robert Loren Humes on April 16, 1907 and had five sons and two daughters.

[Note: I believe Addie Lee and her brother were adopted by Henry Windeknect, III and his wife Ettie, but because Addie was born in 1888, well after the Trail of Tears, I believe it was her mother and uncle who were found by the river which matches the above story in Ms. Exler's book above. See more below.]

These are some possible scenarios of this story.

Theory 1: Henry Windeknecht (born 1817) was not married at the time of the march, but it is possible that he was living in the area at that time. If his brother Phillip were here as well, the brothers would have been living together and taken in the Indian brother and sister. The 1840 census puts Henry on location just 1 year after the 38-48 winter march through Trail of Tears, so it would be logical that he had been here before 1840 clearing land and setting up his home. The children are not in the 1840 census, possibly because the census taker at that time did not include Indians in regular census and there was no official adoption court to make the children legally adopted. The Indian girl would have been born about 1833 and the Indian boy would have been born about 1834 because we know he was 4 years old.

Theory 2: Henry Jr. (born 1817) is with his wife Caroline Windeknecht and two children from his first marriage in the 1850 census , Henrietta (born 1845) and August (born 1846) Windeknecht. It is assumed these two children are children of the marriage of Henry and Eliza because it fits the timeline. However, consider a theory that the children could have been Indian born after the march which their parents made and their parents died, leaving the childen alone crying under a bush near the river where they are found by the Windeknects in 1850. The age of August at 4 years old fits the age of the brother in Ms. Exler's story. Also, this fits the story that both Henry and his wife found the children.

Phillip's obituary states, "When he came to this county the entire lands were covered with forests and Indians were roaming about." There were other tribes in the area than Cherokee. For instance, a part of the Shawnee Indians settled about Cape Girardeau in southeastern Missouri early in the nineteenth century and ceded their lands to the U. S. Government in 1825.

If this "McCormick" were the daughter of the adopted Indian (who actually made the march as in theory 1) by Henry III's father, Henry Jr., then the Indian mother would have been 67 years old (1900 - 1833) at the time of the birth. This is not plausible.

If this "McCormick" were the daughter of Henrietta (as in theory 2), Henrietta would have been 55 years old (1900-1845), which is more plausible. For most women, menopause happens around age 50. About 5 percent of women have late on-set menopause after age 55.

Therefore, this leads us to theory 3 that it was another brother and sister found by the river born even later than 1845 that are not listed in the census.

In any case, the Indian daughter (possibly Henrietta) would have married a man by the name of McCormick and, per the story above, had two children, Addie and Ed McCormick. Henry Jr. (born 1817), is last recorded in the 1880 census, so it is most likely that Henry Jr. has died and his son, Henry III, has taken in Addie and Ed McCormick. Where is Addie's brother "Ed" in the 1900 census? Mary Etta Kemp Windeknecht's obituary indicates that the couple had no children. Therefore, this "adopted" daughter could have been someone taken into the home but not legally adopted.

In the April 30, 1910 census, Cape Girardeau County, Randol Township, District 0028, Henry III (born 1854, son of Henry) and Ettie are living next to his Uncle Phillip and cousins. They have an adopted son, Ernest Windeknecht, age 15, born in Illinois. Ernest's birthday would have been 1895. Since he is not in the 1900 census above, he must have been adopted between 1900 and 1910. We know that Henry and Etta had no children. Is this the the same as the "Ed" in the above story or yet another young person that the couple cared for?

It seems common that the family took in children into their home referencing them as "adopted" because Phillip also has an adopted daughter "Hitchcock."

Here is the genealogy line synopsis:

Henry Windeknecht, Jr. (born 1817) who marries Caroline. His brother is Phillip who marries Louisa. Their father is Henry as well.

Henry and Caroline have other children, including Henry III (born 1854)

Addie marries Robert Loren Humes and has 7 children, one of whom is Norma Maxine Humes Stone (husband Willis Clayton Stone) who has told the above story to Ms. Exler before her (Norma's) death in 1994.

"My ancestors lived there when the Trail of Tears came through and a Cherokee sister and her four year old brother were separated from family along the river bank. My ancestors found them crying under a bush and took them in as their own." Now that's a story to tell, huh? I've heard this story in my husband's line since I've joined the family and I have never had the time to look into it until last night. You want to believe it because it is so good, but have no idea who in the family line it involves and whether it is an embellished half truth. Surly with such a simple story, it would be truth, right? My husband's ancestor is Phillip and it was his older brother who found the children, so the story goes. However, the brothers lived next to each other, one at the entrance of the park and the other where the Interpretive Center is now located, so both families were close and would have had the relationship with these Indians. I find it interesting how many "adopted" these two brothers' families took in. One thing is for sure, they certainly lived at a place and time where Indians roamed and seemed to have good and caring relationships with them.