George Henry Windeknecht was born in Hanover Germany in 1817.

Caroline Brockmann was born in Germany in 1818.

The family lived where the Intrepretive Center is located of what is now Trail of Tears State Park located on the Mississippi River where the Cherokee crossed the Mississippi River from Ware, Illinois into Missouri during their forced removal during the winter of 1838 and 1839. On a gedcom I acquired around 2000, there is a note of a resource "she told me" that Phillip came to America in 1837. If this is true, Phillip would have been 14 years old and his brother Henry would have been 20 years old. With Phillip's young age, it would have been likely that the brothers would have been living together for a period of time. Therefore, the story regarding the family adopting two children found crying left that would have been part of both Henry and Phillip's history. 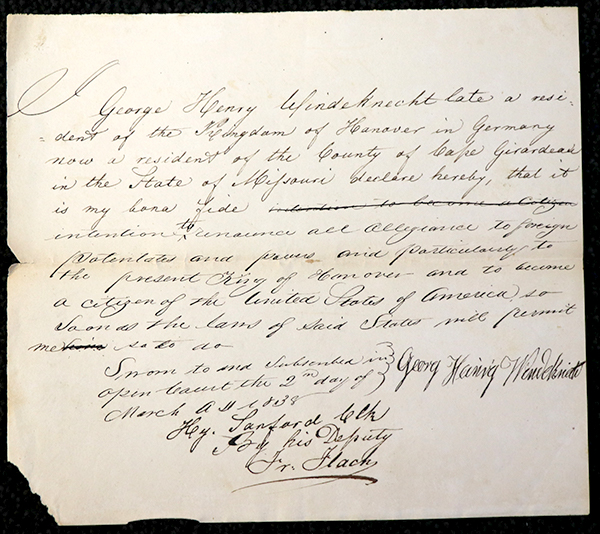 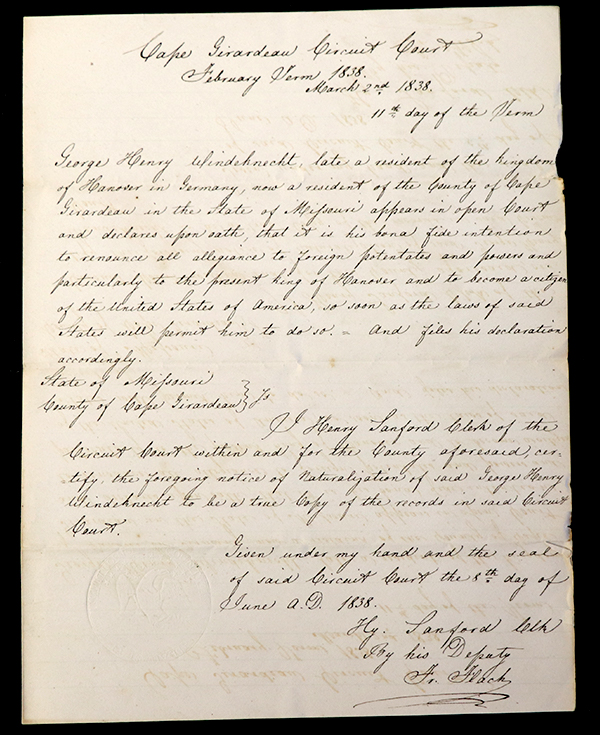 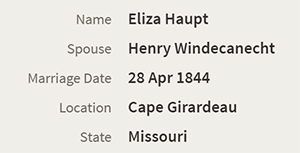 In 1845, Henry and Eliza had a daughter, Henrietta Windeknecht.

In 1846 Henry and Eliza had a son, August Windeknecht.

No record for the death of Eliza has been found.

In the September 9, 1850 Census, Cape Girardeau County, Missouri, District 14, page 384 (his brother Phillip is on page 382), Henry is 32 years old, with real estate valued at 400, and born in Germany. Caroline is 32, born in Germany. Their daughter Henrietta is age 5. Also in the home are Frederick Brockman (10, born Germany), and August Brockman (4, born Missouri, possible Brockson.) I believe this is their son, August Windechnect, but the "ditto" was meant to skip a line. Next door are Henry (52) and Hanah Brockman (42) with their children. (This would be a suggestion that this is Caroline's family, possibly her parents and siblings, or uncle and aunt with cousins).

In 1853, Henry and Caroline had a daughter, Malinda Windeknecht.

In 1855, Henry and Caroline had a daughter, Caroline (Carry) Windeknecht.

In 1857, Henry and Caroline had a son, Henry Windeknecht, III.

Caroline dies between the 1860 and 1868 census, leaving Henry a widow.

Henry is Enrolled Missouri Militia, 56th Regiment Cape County | Phillip was a private and his brother Henry was a Sergeant) Since Phillip is 40, the registration occurred in 1863.

In the August 26, 1870 Census, Cape Girardeau County, Randol Township, Henry is 52 years old, a farmer, with real estate valued at 1000, and personal property valued at 200, from Hanover, Germany. His brother Phillip is living next door. Henry's children in the home are Caroline (19), Malinda (17), Henry (15), and Sebattus (14). Sons Henry and Sebattus are helping as farm hands. Malinda, Henry, and Lebattus have attended school.