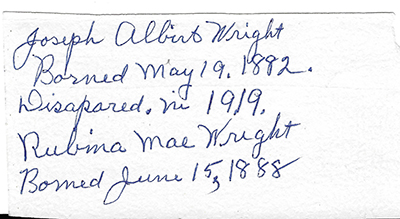 Joseph Albert Wright is the brother of my great-grandmother, Rubina Mae Wright Rutledge.

Read the newspaper articles which tell this story chronologically. Some are embedded on the page below, but some are large articles which require you to click the link to open it up to read.

The story includes twists such as two groups of young men (gangs), a street fight, second degree murder as a youth, first degree murder of a conductor, a hotel robbery, a clerk of the hotel who at gunpoint while refusing to open with combination drew his own weapon chasing the robbers to the street, an accomplice who is a constable (bailiff) killed in a high speed buggy chase across downtown St. Louis, a police officer was shot, a miraculous recovery from a fatal wound, a "negro" honored for shooting the robbers, a mother and "pretty" sister to become imprisoned for harboring thieves and possession of stolen goods, mug shots being used to identify previous crimes, a releasing from prison only to be arrested again walking away from the prison, a spray of pepper being used to attempt escape only to be caught by a dog named Spot, a convict escaping naked using his underwear, bed clothes, a saw, and more, to escape and paddling across the Mississippi River, and disappearing forever. I suppose there is a black sheep in every family!

The St. Charles Hotel was in downtown St. Louis.

Click here to read the newspaper article <-----about a conductor who was shot.

Click here to read the full newspaper article. <-----It is a great must read! Please note it covers every column from left to right as well as one column to the bottom of the page. It is too large to embed on this page. After the page loads, zoom in to read the article using control and the plus and minus keys on your keyboard. 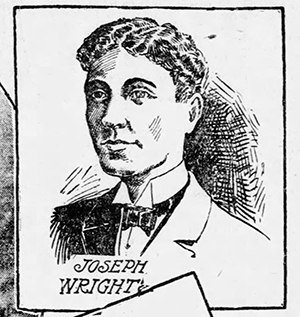 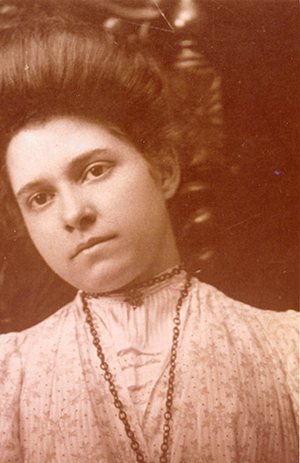 This is the hand drawn photo from this newspaper article.

The photo to the right his Joseph Albert's Dad, Andrew Jackson Wright. I see a resemblance, especially in the wavy hair, jawline, and eyes. The last photo is of his sister, Mary Rubina Mae (Wright) Rutledge at the age of 16 years. I note that many of the photos of her show her photo pulled back in a bun, most likely to tame her wavy hair.

Click here to read this long newspaper article. <-----This is the same date as the above article. 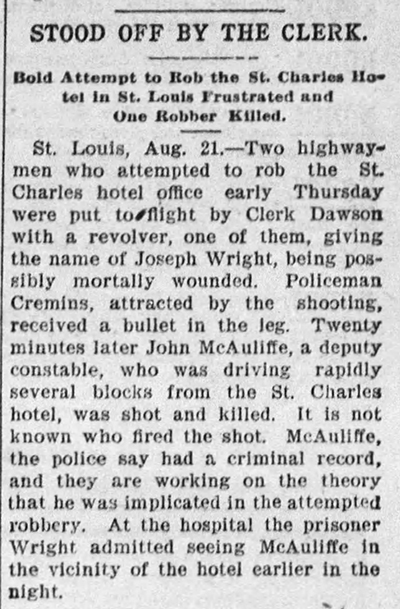 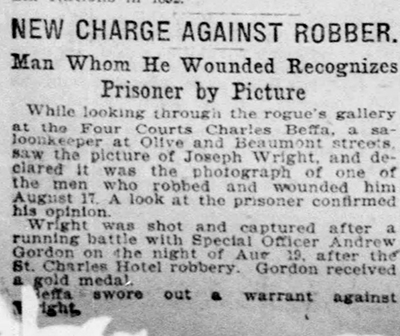 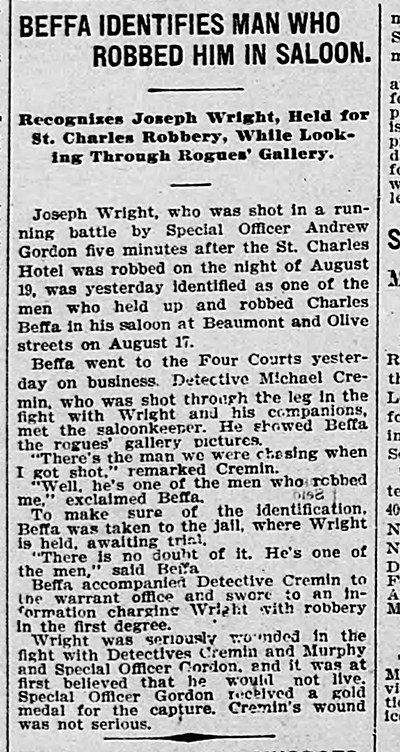 Click here to read this newspaper article which contains information about the discovery of stolen goods and a listing of the same.

Joseph was sentenced to three years, but only served two years.

They let him go and arrested him again as he was walking away from the penitentiary for a crime committed the same year as the previous crime.

Click here to read this article <-----regarding Joseph's amazing escape from prison.

They thought they had found him, but apparently not. Did they ever find him?

Joseph and Rubina's mother, Mary Marshall, died on December 15, 1918, in Desloge. She would have been living with the Rubina and her husband, James William Rutledge after marriage. In 1919, Rubina sees her brother for the last time. There was an envelope marked "open after I die" in Rubina's documents and one of the handwritten notes indicates that her brother, Joseph Albert, disappeared in 1919. It would make sense that he attended his mother's funeral at the end of 1918 and was never seen again.

The above information is the only information I know of this Second Great Uncle (see family line). I remember asking my Dad, "How could someone just disappear?" and he had no answer for me. In my research, I found this incredibly amazing story which seems to fit, but of course I am not 100% sure it is the same person. Nonetheless, it is such a great read fitting for a movie. I can see how someone who might be the black sheep of the family would be avoided in conversation, especially during the more conservative period in time.

I thought I might be able to find this individual now with the advances of the internet and the vast amount of information online now, so I set out on what turned out to be a real adventure. There is a saying, "you cannot make this stuff up."

First, I noted that his Mom, Mary L. (nee Marshall) Wright (age 51), and his sister, Mary Rubina Mae (Wright) Rutledge (age 11) were living by themselves in the 1900 census. (see Rubina and her husband James William Rutledge) Joseph would have been 18 years old and I wondered if he had already found a job and moved out on his own, so I began searching for him in the 1900 census. At first, I had no success, but with the 1900 census listing both the month and the date of birth, I was able to narrow the search field and I found a 1900 census, Cooper County, Boonville Township, Missouri. In today's time, Boonville, Missouri, is over a 2 hour drive from St. Louis, and would have been much further in 1900. The census lists Joseph as an inmate at the Missouri Reform School for Boys. My first thought was that Mary may have had a difficult son that she sent away for assistance, especially since she was a widow. However, although the name is correct, even listing an "A" for his middle name, the census lists that he is born in Missouri and both of his parents are born in Illinois. I do not know where Joseph was born, but his mother was born in Missouri and his Dad in West Virginia. I considered that maybe an 18 year old troubled boy might have never asked where his parents were born, but rather knew they were married in Illinois, so assumed they were born in Illinois.

Second, I found a Joseph Wright (no middle initial) in the 1910 census, Randolph County, Chester Precinct, Illinois which lists an 30 years. Joseph would have been 28 years old. However, it lists his location of birth as Missouri, as well as his parents. In this census, only the state of birth for his Dad is incorrect. Could this possibly be the right Joseph Wright? It is interesting that he is a laborer at the chain factory while being a prisoner at the Southern Illinois Penitentiary. Today this prison is Menard Correctional Center in Chester, Illinois.

Finding only two census that only partially matched, I could not definitively say either census were correct, but made note of them knowing that errors in the census were common. I decided to look for Joseph Albert Wright at Newspapers.com and what I uncovered had my eyes marveling in disbelief.

It seems like pieces of a puzzle falling together. Read the newspaper time line below for the whole story, but I want to highlight some of the facts.

1. The photo of Joseph Wright, his Dad Andrew Jackson Wright, and his sister, Mary Rubina Mae Wright, have resemblances (see photos below).

2. In the January 20, 1904 newspaper article declaring the sentencing, the last paragraph indicates that Joseph "served time in the Reform School for the murder in the second degree, having been charged with killing a son of Charles Doepke." This information is in more than one article (see also Aug 20, 1903 article). This information, along with a later article showing Joseph escaping from the Chester prison, links together the 1900 and 1910 census. If the men in the two census were one in the same, this verifies that the errors in age and locations of birth are truly errors. It is noted again that the 1900 census specifically sets forth his birth as May 1882, the same as our Joseph Albert Wright.

3. The February 5, 1904 newspaper article lists the mother of Joseph Wright as "Mary Wright," which is correct to our Joseph Wright, as well as his sister as "Mary Wright." We know his sister as Rubina Wright (my great-grandma). However, I have always had her listed in my GEDCOM as "Mary Rubina Mae Wright." Her baptism certificate that lists her name as "Mary Rubina Wright" although her birth certificate only lists "Rubina Mae Wright." The age listed for the sister is 17 years old, which is the same age as our Mary Rubina Mae Wright. The article lists the mother's age as "about 40," but this could be a typo because Mary (Marshall) Wright is 60 years old. Maybe the mother just looked young? There is a second article in another newspaper of the same date listing the sister's name as "Mary Ann" and this is the one piece of information that does not fit into the puzzle. Newspapers are known to post incorrect information. I found it interesting that this was the last newspaper article I found while searching. I was convinced this was article was found.