The murder-murder story of Richard Marshall was passed down through history and yet was never authenticated. With new information and facts being found, I am able to shed some light on the falsities of the legends of Richard Marshall. History rewrites itself, hopefully for the better. Sometimes history is merely a bunch of lies commonly agreed upon until someone comes along with proof to the contrary. Below are the histories of Richard Marshall which I was able to find published. Liz was a great help to me in discovering the revisions and we have worked well together. I descend from Richard's second wife, Mary Boyer, and Liz descends from Richard's third wife, Elizabeth Garrett. Sometimes I feel as if I am here to vindicate Richard, although in reality it does not really matter as all of these folks are long gone and life continues. Still yet I am pulled to work on bringing all of this together to set the record straight.

I feel as if the rewriting of this history is never ending. I never want to declare it done because I fear more facts will be found. I continue with an open mind that new facts may be found and this story may change yet again.

Smith Jackson and the Baker's Story

The legend that Smith Jackson's family and the David Baker family passed down through the generations regarding Richard Marshall is interesting. I have found many errors in their story. I believe it was the descendants of Smith Jackson and the David Bakers who by word of mouth caused the story to be published online and in books as the popular story unfounded. I suppose some would call it folklore.

In 2018 there existed online a publication entitled "Wilson Family History" by Wendell E. Wilson. The documents were moved in 2020 and are currently at this web address: https://mineralogicalrecord.com/wp-content/uploads/2020/10/wilson/pdfs/15B.%20Jackson.pdf. On these pages we read about Smith Jackson, the man who killed Richard Marshall. The below are applicable excerpts from pages 320 (top), 323 (bottom), 324, 326, and 327 (top).

The errors in this writing are as follows:

1. Smith Jackson did not "survive" a final altercation with Richard Marshall. He shot him in "cold blood" as per the depositions below.

3. Richard Marshall's wife has her name mistakenly as Elizabeth Jackson. Her maiden name is Garrett. Elizabeth's mother, Mahala Hamilton, first married John Garrett and had two children, one of which was Elizabeth. Mahala later married William Pentecost Jackson and had 7 more children. Therefore, Elizabeth's name is often mistaken as her mother's and half siblings' surname of Jackson. More about Elizabeth can be read in the Snyposis.

3. There is no documentation that Richard was known as quarrelsome or dangerous man other than this history passed down by the Jacksons. Quite contrary, as indicated in the Snyposis of statements pulled from documentation, Smith Jackson was the quarrelsome one always ready for a fight and Richard was of quite a different character.

4. I have found no documentation that Smith Jackson and Richard Marshall were returning from Potosi after having served on a jury trial. Although this may be true, there is doubt. The transcripts do place Smith Jackson and Richard Marshall on a nag together before the murder near the Northcutts when they met up with the Bakers and turned to go to Bass store. Richard left Bass with the Bakers and there is no mention as to when Smith Jackson and the nag left. I have even wondered if Smith Jackson killed Old Baker because he was in the vicinity and Richard, from these stories passed down, did have reason to be angry with Smith Jackson. This, however, is just as much speculation as what has been passed down by word of mouth into these legends by the Jackson. Mr. Wendel credits his source for this information as the 1995 History Book of Sullivan (number 32). The credibility of this history is also in question because it is mere legend passed down by the Jacksons with many false facts in and of itself.

5. There is no documentation that Richard was "pardoned to join the army." The source of this fact (number 22) is "1867 trial records (see Appendix). This Appendix is the depositions as shown below which are all statements, once again, made by the Jacksons. There is documentation that Richard was pardoned because of his trust and loyalty to the jailors and deputy jailors while in jail, along with the letters of good character submitted. If Richard were to "join the army" why was he in Sullivan where he was murdered rather than in the army? There is documentation as to the anomosity between Richard and Smith in that Richard was Union and Smith was Confederate and that Richard feared the guerrilla warfare in Washington County. It could be likely that Smith was participating in this guerrilla warefare secretly as indicated by his eagerness to fight and his service for the Confederates.

I have found no documentation that Richard's death sentence was commuted. I believe this was a case of mistaken assumption not having knowledge or understanding of court proceedings. Right before Richard was to be hung, the Judge "stayed" his judgment of guilty until such time as the appeal decision was rendered. A stay merely puts a judgment on hold until it is upheld or found to be in error. Things happened so quickly that upon the appeal decision, the stay continued through the pardon process.

This image is from the same publication by Mr. Wilson, at page 326, which he indicates is adapted from an engraving by Frederic Remington called "A Fight in the Street" (1888). Mr. Wilson also credits SCHATZ, d., and DACE, R. (1995) A History of Sullivan Missouri and the Bank of Sullivan. Missouri Publishing Company, p. 6-7."

I found this image in a book "The Cowboy Legend: Owen Wister's Virginian and the Canadian-American Frontier" by John Jennings.

When I first saw this photo I thought it was a depiction drawn of Richard Marshall's death, but now realize it was just used as a likeness of what it might have looked like should the story passed down by the Jacksons and Bakers be correct.

In the publication entitled "Wilson Family History" by Wendell E. Wilson (https://mineralogicalrecord.com/wilson/pdfs/15D. Jackson.pdf) there appears a transcript of depositions as follows: 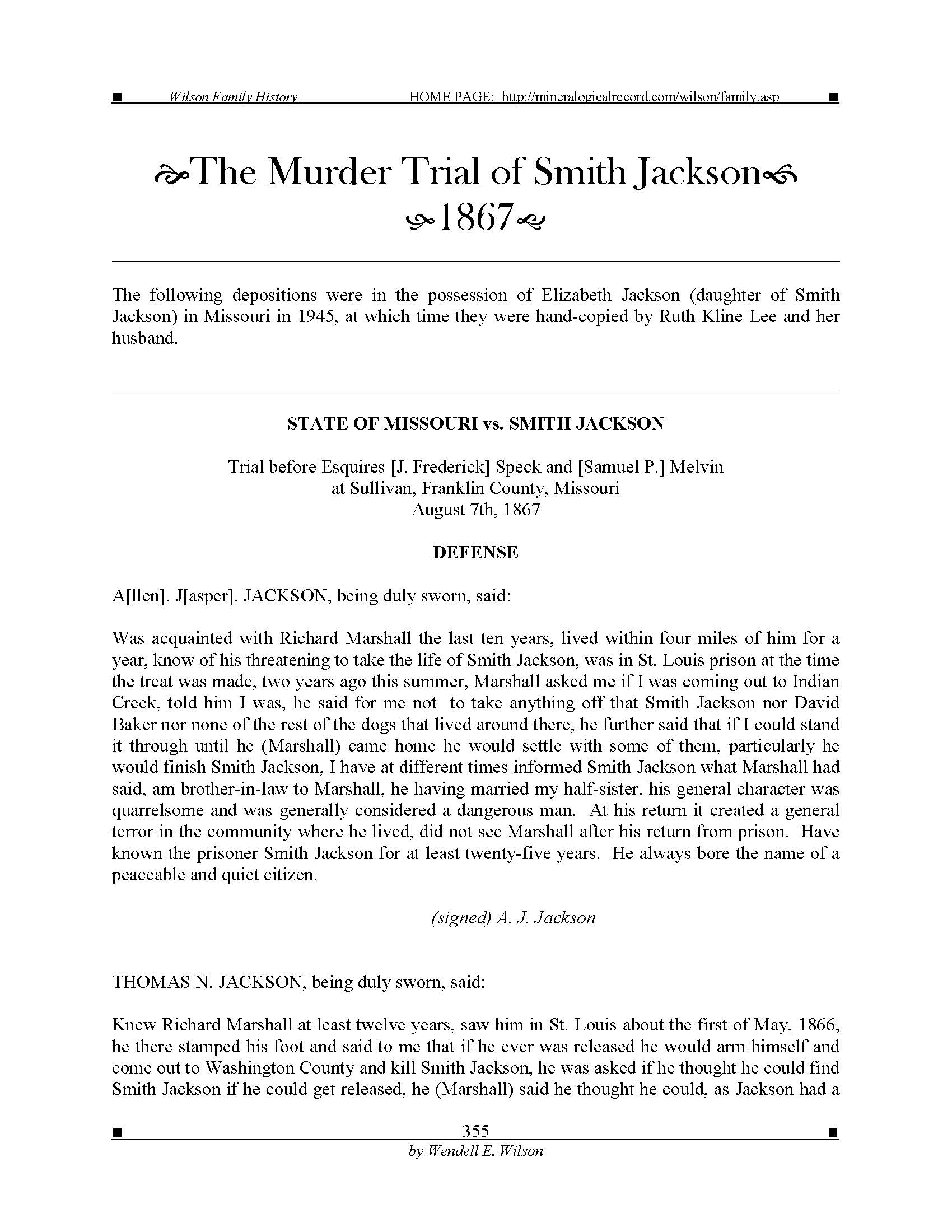 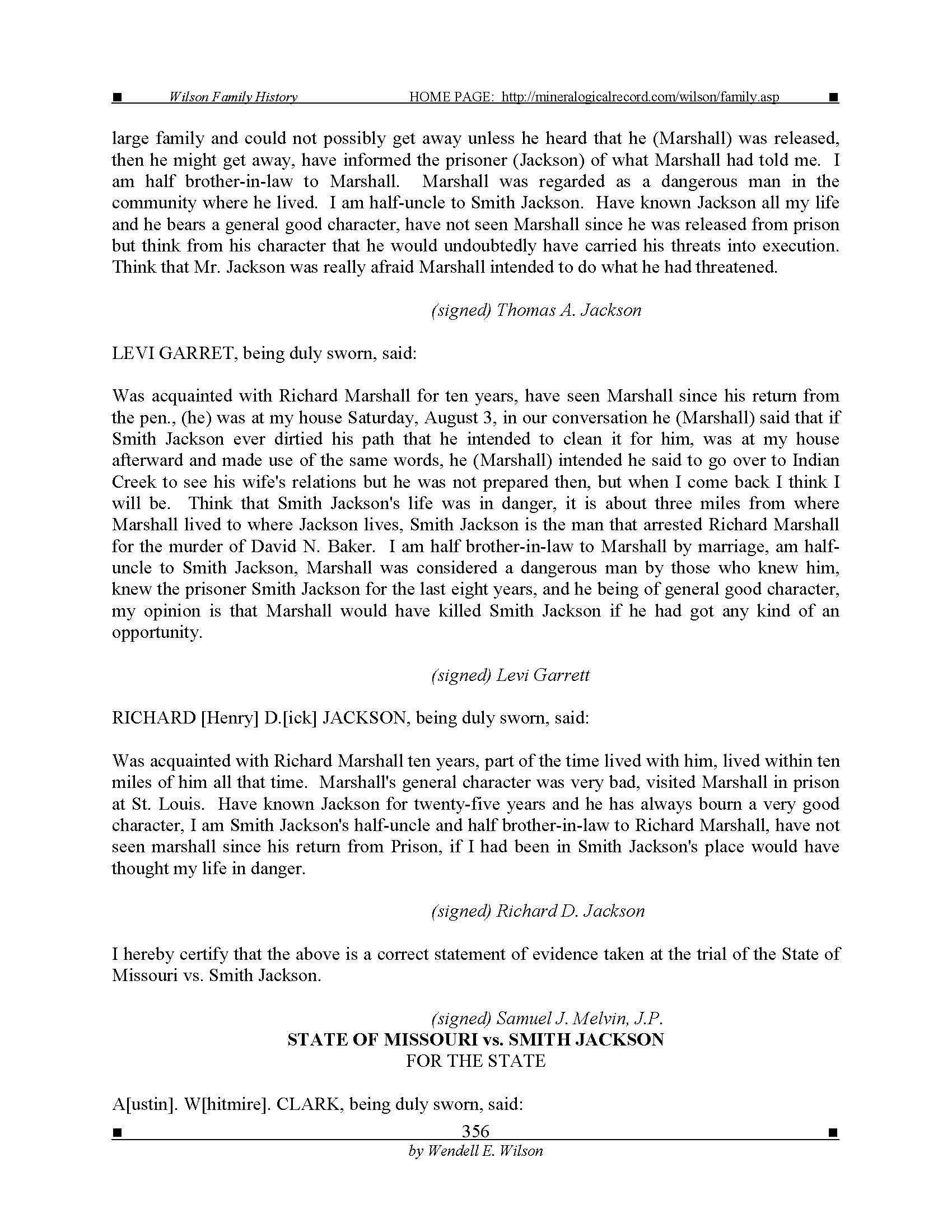 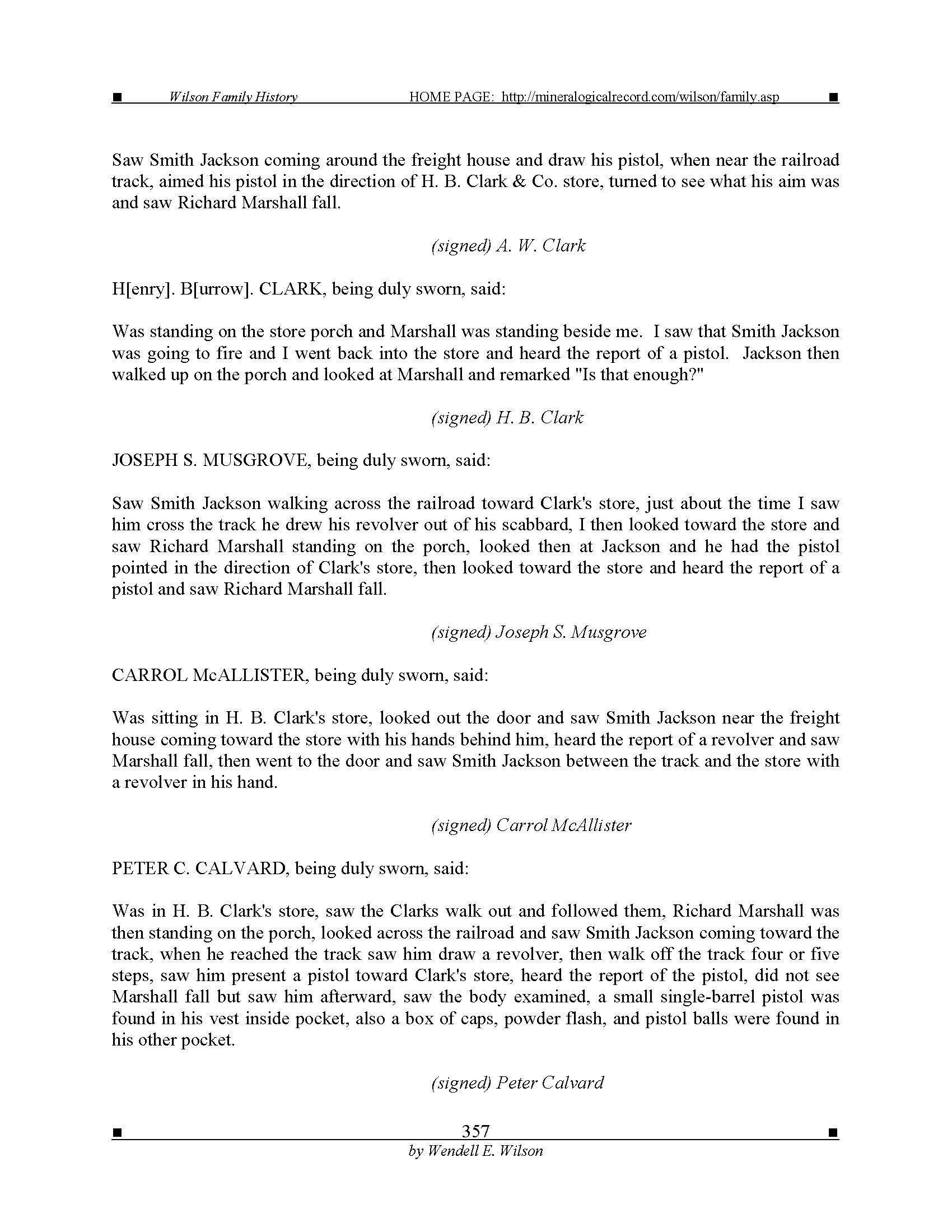 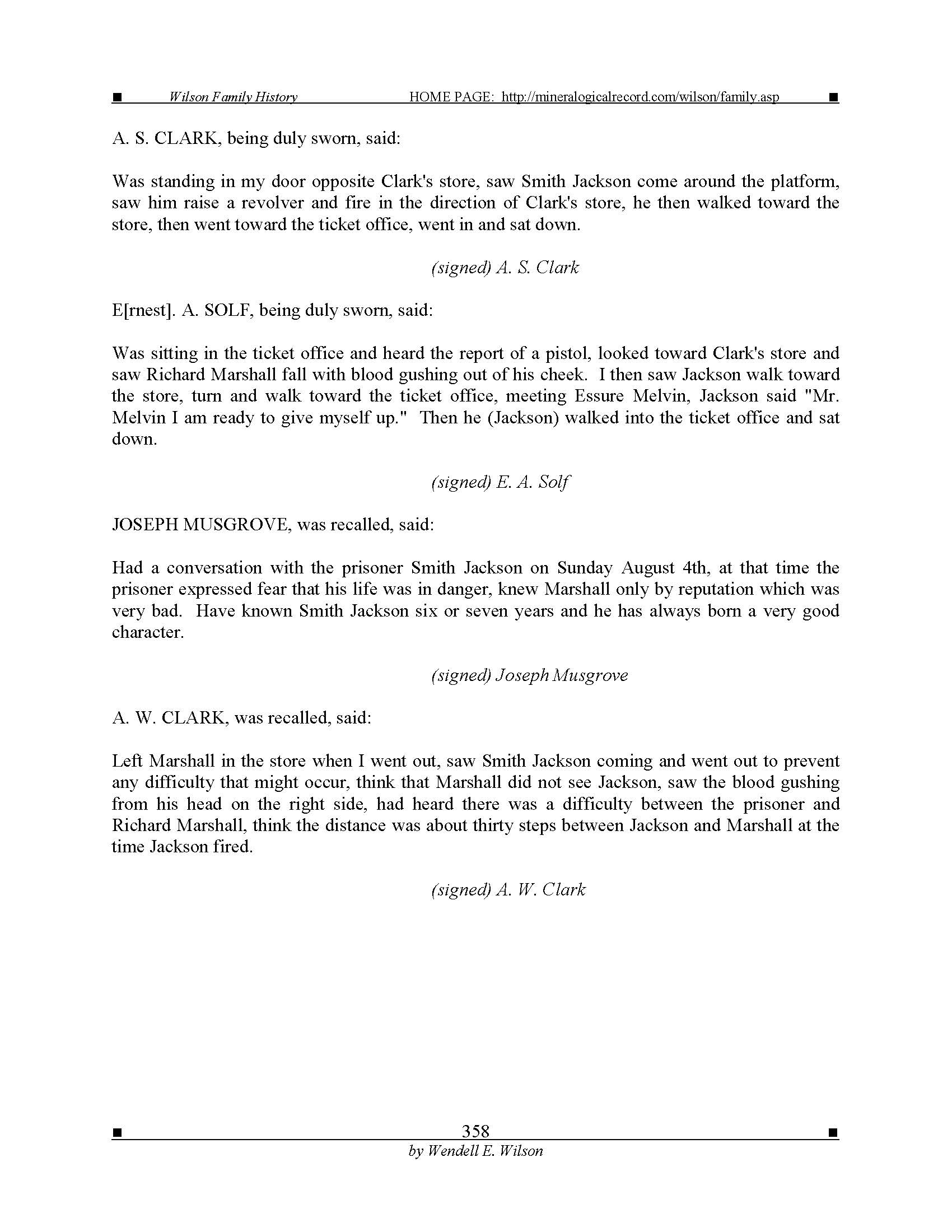 have searched both Crawford County, Washington County, and Franklin County for any court case whereas Smith Jackson was charged with the crime of murder and tried on August 7, 1867. I wrote the Missouri State Archives and requested that they search for the same. Their search came to no avail as well. In 1945 Elizabeth Jackson, daughter of Smith Jackson, was in possession of original depositions which were transcribed and appeared in the "Wilson Family History." These depositions describe the death of Richard as he was shot in the right cheek, not even aware that someone was pointing a gun at him.

I believe that these depositions existed and that their transcriptions to be accurate. However, I also believe that incorrect assumptions were made regarding these documents. Depositions are generally not a part of the court record, but rather are utilized by the court and returned to the attorneys of record. It is possible that when the attorney, as allowed by law, was able to destroy the file, he instead gave it to the family. Attorneys are only required to maintain their files for a specified period of time.

Why were depositions held rather than witnesses at trial? It could be that these were examinations or interragations that were "signed statements" (similar to what police do today when they bring witnesses in for questioning) before filing a complaint and indicting.

THE HISTORY OF SULLIVAN, 1995 EDITION

In A History of Sullivan, 1995 edition, as found on the City of Sullivan's website, on Pages 6 and 7, we read a biography submitted by Smith Jackson's family. Click here to read Pages 6 and 7. It was nice of the family not to mention Richard's name in the article. However, I wish they would put out a third edition so I could correct the false statements in their family history that has been passed down and now been inserted in a book as truth for people to find in the future.

In the book, History of Franklin, Jefferson, Washington, Crawford & Gasconade Counties, Missouri, Page 501, the Goodspeed Publishing Co, 1888, we find our ancestor in print with several errors. First, he did not kill Moses Baker, but rather David Baker. Second, we see the history that has been passed along that he was pardoned to go into the army (i.e. civil war). The Civil War was from Apr 12, 1861 – May 9, 1865 and he was pardoned in July 1867 and killed just weeks thereafter in August 1867. The truth as we have found out is that he was pardoned because of his service to the jail and his good character. It would seem that Smith Jackson's family was interviewed by Westin Arthur Goodspeed and that is where he received his false information.

Whoever wrote this page: https://www.genealogy.com/ftm/f/o/l/Nicky-Foley/WEBSITE-0001/UHP-0079.html tries to put together Moses Baker with David Baker, seeing the confusion in facts.

There are a lot of errors in this legend that has been passed down by Smith Jackson's family. There may be some clues of truth of other facts, but it is hard to determine what is truth and what is fact. You will see on page 325 a photo of David N. Baker's gravestone as the one that was murdered. The true fact is that it was David N. Baker's father, David Baker, who was killed.

The article indicates the incident happened on September 4, 1862; The correct year is 1863.

It may be a good clue as to why Richard Marshall did not like Smith Jackson in that Smith Jackson was the one to arrest him. In the pardon papers, we also read this same information.

The article mentions that Richard Marshall was released from prison in 1866 or 1867; this is accurate as it was July 20, 1867. I have seen no documentation that he was "pardoned to join the Army" other than the it was "revocable to pleasure of Governor at any time before 1st January 1869." Was this the alloted time he was to remain in the Army? However, it is noted the Civil War had concluded.

I believe Mr. Wilson took some of his incorrect information from the Goodspeed article (see page 353 credits).

The story of the "three jurors" was passed down through Smith Jackson's descendants. There may be truth to it, but in reading the witness statements in Richard's trial, there is no mention of the three riding back from Potosi after being jurors, but rather the three riding to and from Bass's store and talk about buying Whiskey. Smith Jackson and Richard Marshall were together before the murder riding a nag together before they went to Bass Store. However, Richard brought the children home from school during this period of time too, so it does not fit that they were in Potosi as witnesses to a trial unless that happened in the morning. [Note: do the Washington County court records show a trial that day?}