Marie Catherine Tabeau was born 1757 in Châteauguay, Roussillon, Quebec, Canada to Jacques Hubert Tabeau and Marie-Charlotte Duquet. Her parents remained in Quebec where they are buried, so when and with whom did she come to the Illinois Country?

In the May 31, 1766 St. Louis (Spanish Louisiana Territory) census, Antoine is listed living with his widowed mother, Widow Marechal, Marie Jeanne Illeret. In this family are three arms-bearing men (Jacque Marechal, Nicolas Marchal, and Antoine Marechal) wife (Marie Jeanne), 3 adults males, 1 adult female (Catherine Marechal), 2 sons (Joseph Marechal and Francois Marechal), and 1 daughter (Marie Elisabeth Marechal). This census is available on the Missouri Secretary of State Archives and "are are the property of the National Archives of Spain and cannot be used for any purpose other than research."

Next door is Antoine's sister with her husband, Joseph Calvé is listed as an arms-bearing man, with a wife (Marie Marechal)(ALSO MY ANESTOR), one son (Joseph Jr.), 1 daughter (Marie Therese), and 1 slave.

Antoine and Catherine were married on January 7, 1777, in St. Louis. This is the marriage record from the Old Cathedral in St. Louis, Missouri. I can see their parents names listed. Click here to read the entire entry. (get transcription; Ancestry shows two dates, the second as 19 Jan 1774)

From The Spanish Regime in Missouri, Volume Vol II. CXXV, Page 384, by Louis Houck (originally published prior to 1923).

On June 1, 1778, Antoine and Catherine have a daughter, Marie Madelaine Marechal, in St. Louis, Missouri.  No other information is immediately available.

On March 24, 1780, Antoine and Catherine have a son, Antoine Marechal, Jr., in St. Louis, Missouri.  He would marry Marguetite Couque or Cook and have children. He would die in Calhoun County, Illinois. (Note: get transcription) 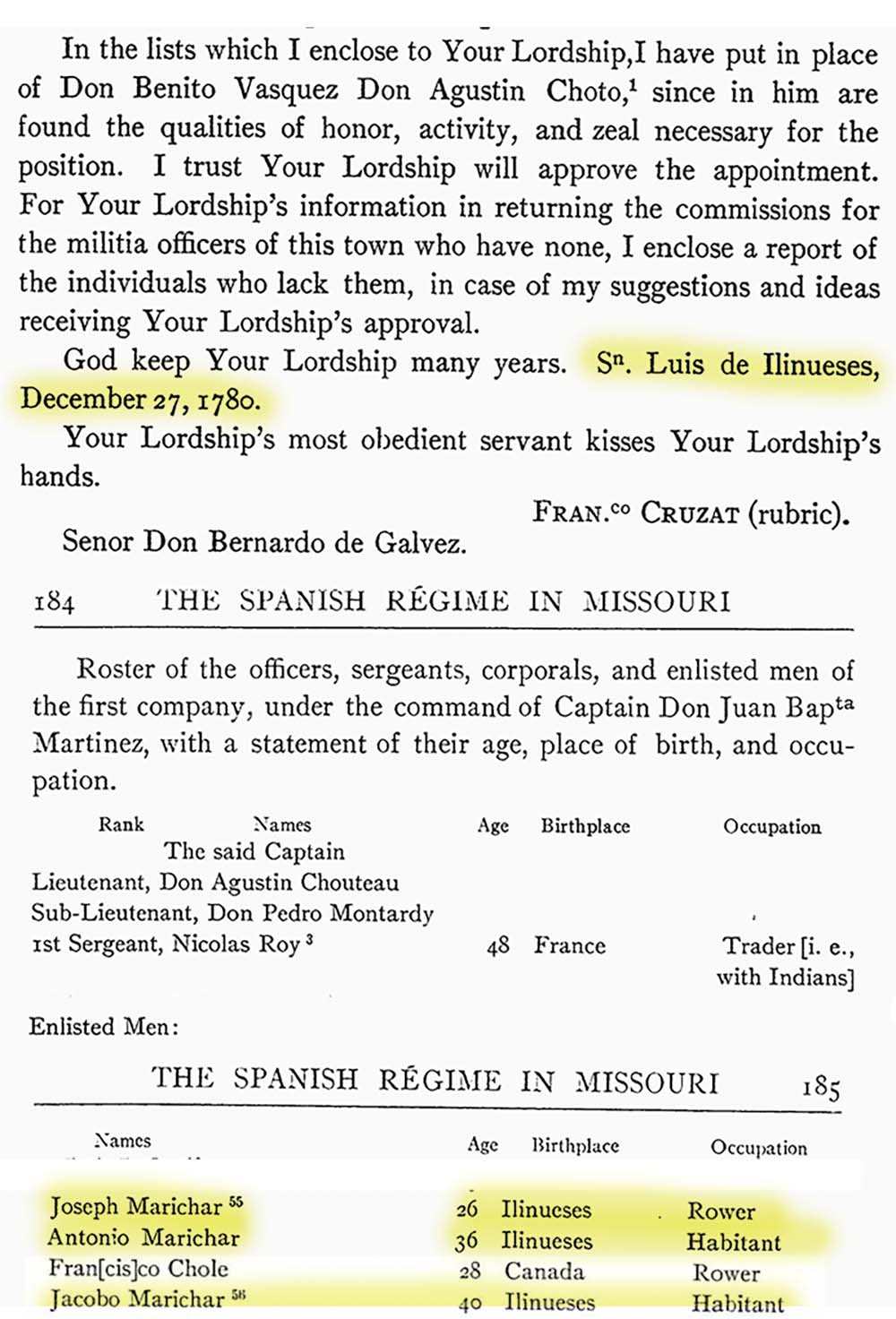 Bookmark 55 indicates that Joseph and Antoine lived in St. Ferdinand (Florrisant) in 1796.

On April 13, 1783, Antoine and Catherine have a son, Jean Louis Marechal, in St. Louis, Missouri. He would marry Louise Portneuf and have one child. He died February 11, 1812.

On November 20, 1785, Antoine and Catherine have a daughter, Julie Marechal, in Florissant. She would marry Joseph Tayon and have children.

On January 30, 1786, Antoine and Catherine have a son, Jean Baptiste Marechal, in St. Louis. Nothing more is immediately known about him.

On February 07, 1790, Antoine and Catherine have a son, Leon Ferdinand Marechal, in Florissant.  He would marry Elizabeth Fournier and have children.

On December 7 1791, Antoine and Catherine have a daughter, Marie Catherine Marechal, in St. Louis. She would marry Ignace Tayon (Taillon) and have children.

Antoine is listed in the 1793 Illinois Early Census Index for St. Ferdinand. This would be Florissant today which was a French Catholic village named St. Ferdinand de Florissant after St. Ferdinand III, who was King of Castile, Spain from 1217 to 1252. (NOTE: find copy of census)

On April 26, 1794 Antoine and Catherine have a son Louis Benoit Camille (Benoist) Marechal in Florissant, Missouri. He is my 4th great-grandfather. See his biography. 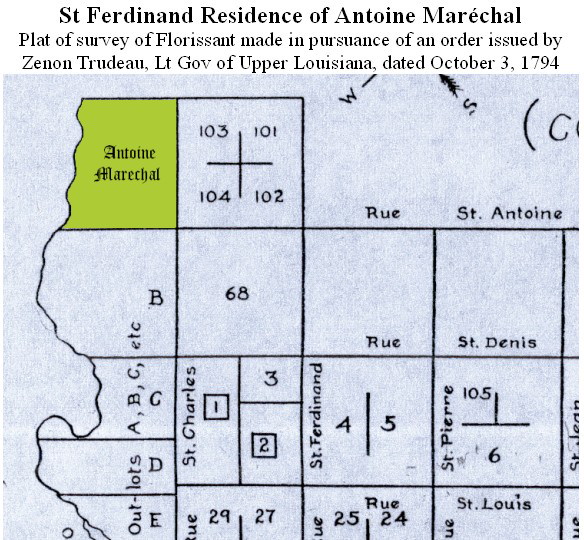 On October 3, 1794 a plat of survey of Florisant was created. This images is credited to "Edited, JPinz" and uploaded to Ancestry in 2011.

On January 11, 1797, Antoine and Catherine have a daughter Marie Therese Marechal. She would marry Louis LeTourneau and have children. She would die May 2, 1849 in Carondelet. 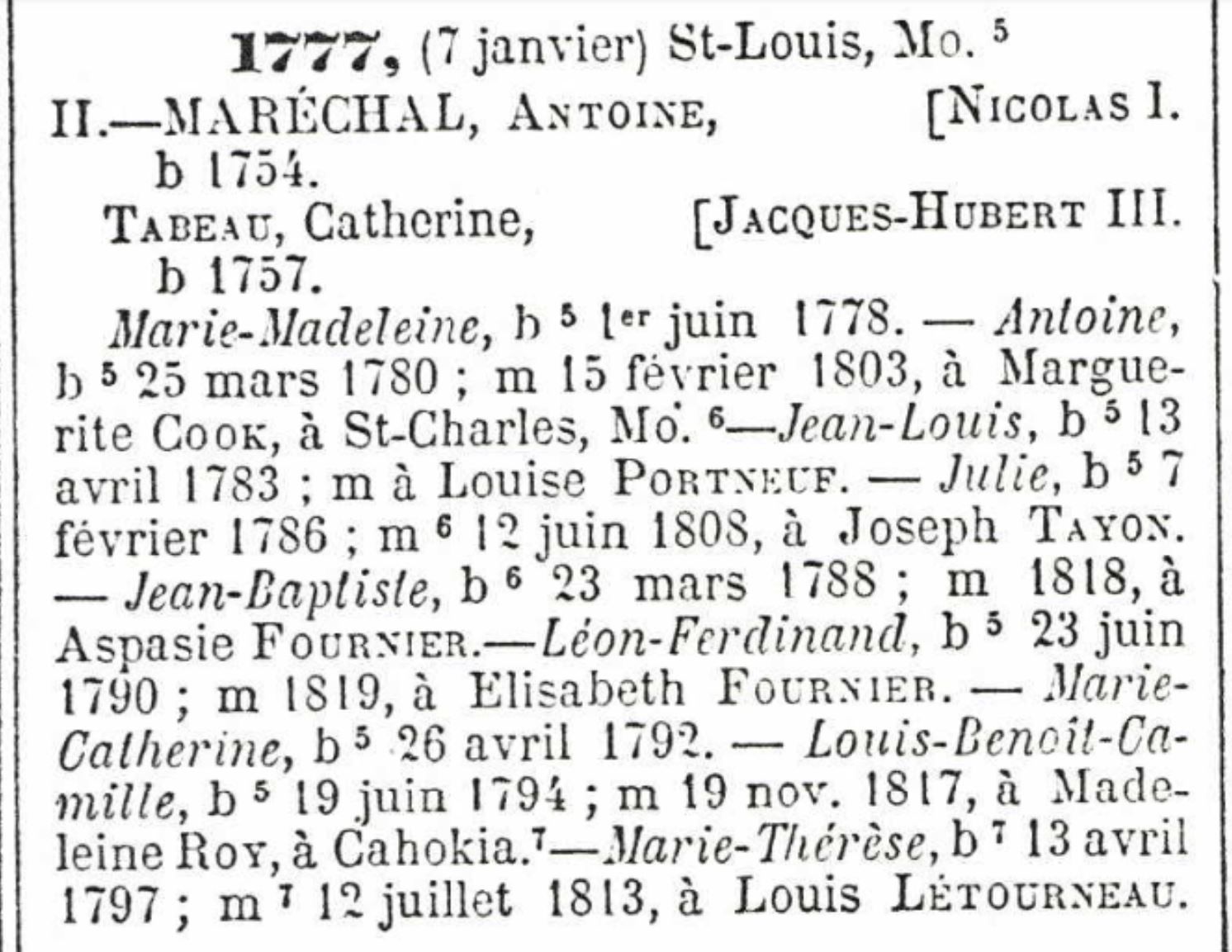 Antoine died in ____ in Florissant, St. Louis County, Missouri, USA. (find documentation, another places lists 1805) (Many people have given him the death date of 1827 (including Find-a-grave) because there is an Antoine Marechal as administrator of Frances Marechal's estate in 1827. This Antoine has a brother Francois who died in 1827. If he administered his brother's estate, he would still be alive in 1827. It is also secured (witnessed) by Baptiste Marechal and Louis Lefourncau)