to read the latest updates and to chat with me.

Nicolas Antoine Boyer, I, was born on February 23, 1642, in La Rochelle, France, Aunis Province (now Charente-Maritime) to Etienne Boyer and Perinna Peineau. His parents are Etienne Boyer and Perinne Peineau. He was baptised at Notre Dame de Cogney. Read LaRochelle on Wiki. Nicolas was born after siege in 1627-1628, just 13 years after the siege, his parents would have lived through the siege. 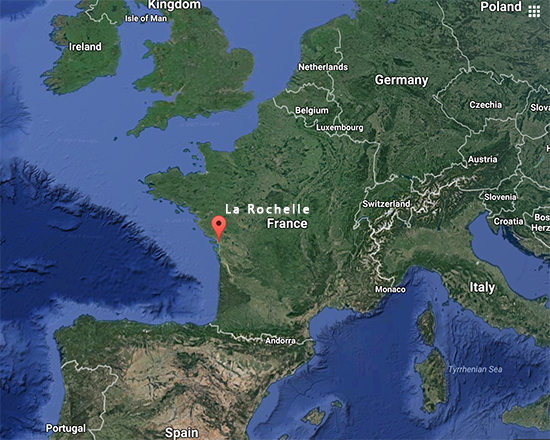 Marguerite Maclin was the daughter of Nicolas Maclin and Suzanne Larose of Sezanne en Brie (which is 60 miles east of Paris) of the department of Champagne (Marne), France. She was born 1648 in Champagne, France.

Nicolas signed a 3 year servitude contract a LaRochelle to go to New France in the service of Claude Robutel. In 1664, he left France, the area of internal religious and political conflict. Claude Robutal was a merchant at LaRochelle who went to New France in 1653 and returned to France where he was married in 1659. Robutal continued to recruit new pioneers for his concession of the seigneuries of Ile St. Paul on January 28, 1664. Nicolas was to be a part of this concession for the time.

Marguerite came to New France as a Fille du Roi and had married Jean Chicot ant Boucherville on October 23, 1662. Marguerite and Jean had a daughter Catherine Chicot on Oct 24, 1663, and a son Jean Chicot on March 23, 1666. Her husband Jean Chicot died in 1667 at Montreal, Canada. Marguerite needed a spouse to help her with her young children.

Nicolas Antoine Boyer and Marguerite Maclin were married on August 18, 1667, at Notre Dame de Montreal, Quebec, Canada. They had 10 children.

On April 24, 1668, Nicolas and Marguerite have a daughter, Marguerite Boyer, who died the same day.

On February 16, 1677, Nicolas and Marguerite have a daughter, Marie Boyer.

On February 23, 1679, Nicolas and Marguerite have a son, Nicolas Antoine Boyer, II.

On March 31, 1682, Nicolas and Marguerite have a daughter, Marguerite J. Boyer.

On April 15, 1688, Nicolas and Marguerite have a daughter, Marguerite Boyer.

The notorial records indicate that on June 30, 1694, Nicolas and Marguerite had been working for Jean Debeins and that Jean promised to pay the 12 livres still owed them on Saint Martin's Day. Jean was a neighbor of the Boyer family living at Riviere St. Pierre. This was a farming community, which indicates that Nicolas was a farmer.