Dorothee Olivier was born in 1716 in Kaskaskia, Illinois, to Jean Baptiste Olivier and Marie Marthe Accicia. Dorothee's mother is Native American, so Dorothee is half Indian. [Need birth documentation: A comment by someone: She was born May 14, 1728)

It is not known when Nicolas traveled "west" and settled in Kaskaski, Illinois.

Nicolase and Pierre were hired by LaChapelle to make the voyage to Detroit in the 1730's. In 1937 he is mentioned in a settlement in Kaskaskia. (Note: Find documentation) 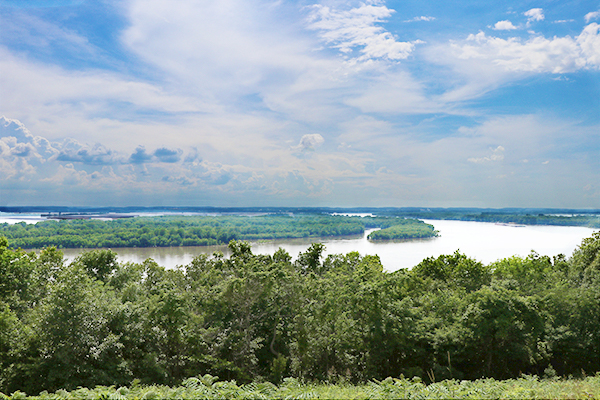 This is a photo of Kaskaskia Island today (June 2017) taken from the overlook at Fort Kaskaskia State Park. In front is the Mississippi River and to the right is the Kaskaskia River. 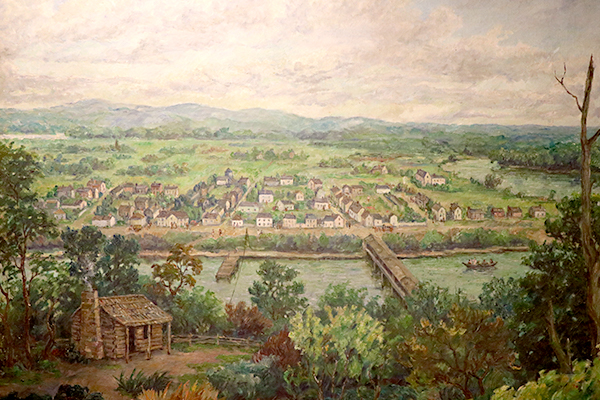 This is a photo of a painting at the Pierre Menard home just below Fort Kaskaskia (I did not get the name of the artist). This is what Kaskaskia may have looked during the time Nicolas and Dorothee lived here in the 1700's.

Nicolas (age 32) married Dorothee Olivier on May 14, 1748. Nicolas's wives were both, metis (one Indian parent) The marriage contract was signed two days before the wedding; Nicolas was accopanied by his cousins Charles Huet Delude, Claude Caron, Charles La Chapelle, and Charlotte La Chenay. Dorothee was accompanied by her parents, maternal sister Mme. Baron, and her two brothers Francois LaBossier and Joseph Oliver. Nicolas became guardian of Marie Rose's child Pierre St. Ange and received from guardian Louis Bore the sum of 540 livres on September 4, 1748, , which was due to Nicolas as co-heir of the St. Ange's estate.

On April 19, 1749, Nicolas and Dorothee were donated a house and lot on the Kaskaskia prairie with a barn, tools, and all their livestock from Dorothee's parents, Jean & Marie Marthe Olivier, with an understanding that they would care for Dorothee's parents for the remainder of their lives.

In 1749, a son, Jean Boyer (Some online list him as Louis or Jean Louis and this information comes from Lucille Basler probably 40 years ago but we do not know the source. Get birth documentation), was born to Nicolas (age 32) and Dorothee. (See estate papers below for genealogy proof.) There was a Jean Boice that has sometimes been accepted as him, but although the time frames for this Jean fits in so nicely, it is not our Jean Boyer. Jean is a witness at the wedding of Charles in 1786. In the 1752 census of Kaskaskia (Vaudreuil papers) Nicolas Boyer is listed as with a wife and two boys under the age of 16. We know Charles is definitely one, the other was probably Jean.

In 1750, Nicolas (age 36) and Dorothee have a son, Charles Boyer. (See estate papers below for genealogy proof.) He would marry Marie Madeleine Maurice dit Chatillon on July 10, 1786. His brother Jacques below had already married Madeleine's sister in 1780.

(Note: I have proven Charles birth year as 1750, so it is the same year as Nicolas below. Were they twins or just 9 months apart in the same year?)

On July 10, 1750, Nicolas (age 34) and Dorothee have a son, Nicolas Boyer (most likely the IV). (See estate papers below for genealogy proof.) He would marry Charlotte Caron on November 24, 1778, at Ste. Genevieve Catholic Church, Sainte Genevieve, Sainte Genevieve, Missouri. The above image is their marriage record which is documentation of Nicolas's parents. It reads: On November 24, 1778, after the publication of 2 Banns - At the parish mass, with dispensation of the third marriage bann, Nicolas Boyer, native of Kaskaskia, son of Nicolas Bojier and Dorothee Olivier, his father and mother of the one part with Charlotte Caron, also a native of Kaskaskia, daughter of Claude Caron and Charlotte La Chenzy, her father and mother of the other part, and ....(meaning is having discovered no further impediments to the marriage) . By our mission priest posted to Illinois by the general diocese of Quebec according to the customs of the church. Signed by Father P. Gibault. Witnesses [whose names I recognize] Cola Bojie [Colas is nickname for Nicolas], Boyez fils [means Boyer son, don't know if this refers to son Nicolas or another son] , Louis Charleville, Jean Baptiste Valle, Robinet.

Father Gibault was the missionary priest stationed at Kaskaskia, I believe. He would cross back and forth across the river and administer sacraments in Ste. Genevieve and other parishes and missions on the Illinois side. (Translated from French, Peggy Moore, 6/21/2020).

In 1752, Nicolas (age 35) and Dorothee have a son, Pierre Boyer. (See estate papers below for genealogy proof.) 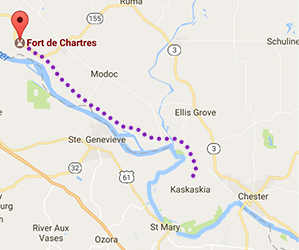 In 1755, Nicolas (age 38) and Dorothee have a daughter, Marianne Boyer. (See estate papers below for genealogy proof.) She would marry Hippolitte Robert.

On December 2, 1759, Nicolas (age 43) and Dorothee have a son, Jacques Boyer. (See estate papers below for genealogy proof.) He would marry Marie Elizabeth Maurice dit Chatillon on October 16, 1780.

16 Oct 1780 , after the publication of three marriage banns made public over three consecutive Sundays between Jacques Boyer, native of Kaskaskia, son of Nicolas Boyer and Dorothee Olivier, his father and mother on the one part, and Marie Elizabeth Morice dit Chatillon, native of Kaskaskia, daughter of Jean Bte. Morice dit Chatillon and of Marie Jeanne Corset, her father and mother of the other part; not having discovered any canonical impediments to the marriage, we, the undersigned clergyman, by delegation of ? and with their mutual consent to marriage, have performed the sacrament according to the form prescribed by our Holy Mother Church in the presence of witnesses whose signatures are made here. Father P. Gibault.

On February 14, 1763, Nicolas (age 46) and Dorothee have a daughter, Maria Louise Boyer. (See estate papers below for genealogy proof.) she would marry Julien Choquet.

On August 23, 1766, Nicolas (age 50) and Dorothee have a daughter, Judique (Judith) Boyer. (See estate papers below for genealogy proof.) She would marry Nicolas Cailliot dit LaChanse.

In about 1768, Nicolas (age 51) and Dorothee have a son, Joseph Boyer. (See estate papers below for genealogy proof.)

In 1770, Nicolas was in the Ste. Genevieve census, listed as having one adult male Indian slave and two under 15 years of age. There were a total of 29 Indian slaves owned by 13 different citizens. This move from Kaskaskia to Ste. Geneview was over 100 years prior to the Mississippi River moving in April of 1881, or even the significant flooding that was experience in the Great Flood of 1844 (74 years prior). Nicolas and his family would have had to cross the river to move to Ste. Genevieve. (Note: find 1770 census in Ste. Genevieve)

The American Revolution was from April 19, 1775 to September 3, 1783. As Spanish citizens the Boyers were enemies of America's enemy, Great Britian and yet not official friends of America (United States). In July 1778 the American General George Rogers Clark seized Kaskaskia, the Boyers former home. In 1780, the closest British outposts were at St. Joseph, Detroit and Michilimackinac which were hundreds of miles from Ste. Genevieve.

The great flood of 1785 caused the residents of Old Ste. Genevieve to move to higher ground, New Ste. Genevieve, and the historic town we are familiar with today. Did Nicolas and Dorothee live to see the great flood? What month was the flood? Flooding often occurs during the Spring months, the same time they both died a month apart. Did the flooding have something to do with the cause of their death?

The estate administration document for Nicolas and Dorothee is vital as vital information documentation. This one document verifies:

There are some significant characters in our early American history in these documents.

Don Antonio de Oro was the Spanish commandant during a quiet period after the American Revolution from 1784 to 1787 of the Ste. Genevieve garrison where local militia continued to gathered.

The word "Don" is similar to Mr. & Mrs (Señor & Señora), but Don and Doña is a title of respect that only comes before the first name, (sometimes for the full name) and never for the last name only. It is commonly used today when addressing senior people. In Spain, it was considered a title reserved only for the royalty or a noble.

Jean Datchurut was a well-known merchant in Ste. Genevieve and was in the 1766 militia roll. He was not a farmer, but was involved in the commercial controll of the shipment of agricultural products, and later lead mining, from town up and down the Mississippi River.

The sale of the inventory was concluded with the total sum of 7505 livres.

Charles Boyer bought his parents' land for the sum of 425 livres and the house and land for sum of 605 livres.