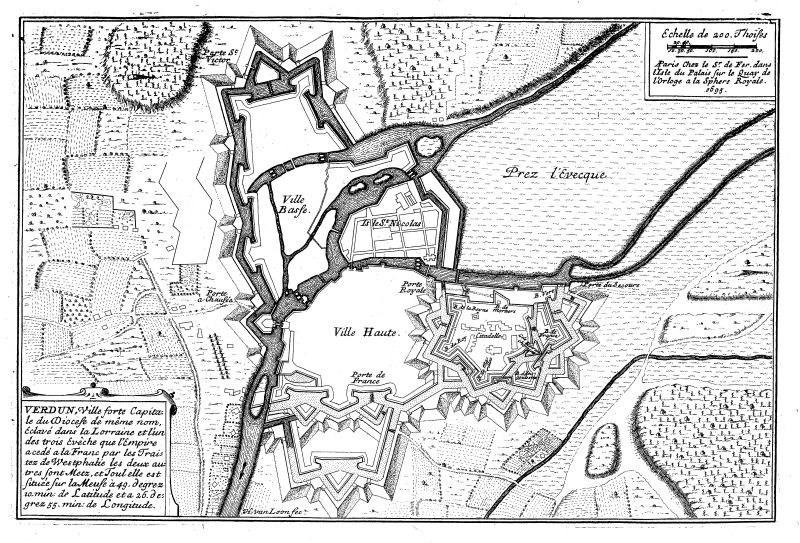 This is labeled as a 1709 map of Verndun and uploaded to Ancestry: " leslier03 originally shared this on 25 Mar 2015." Original source is not given.

Nicolas arrived at Fort de Chartres in the Illinois Territory as a marine soldier with the French arch in 1735. Nicholas was direct immigrants to Illinois from France totally bypassing Quebec. Nicolas was a soldier at Fort De Chartres per the below shown " The Spanish Regime in Missouri, Volume Vol II. CXXV, Page 384." See video and photos of Fort de Chartres on my website. (Need documentation) The sources seems to be Lessard, Renald, Jacque Mathiew, and Lina Gouger. "Peuplement Colonisateur au Pays des Illinois." In L'Ancetre: Bulletin de la Societe de Genealogie de Quebec, vol. 14:6 (February 1988), pp. 211-225; vol. 14:7 (March 1988), pp. 266-278." I bet that is in French!

Nicolas and Jeanne were married on August 20, 1735, in Cahokia, St. Clair County, Illinois. Read more about Cahokia Mounds on this page. A French-Canadian priest and genealogist, Father Cyrpien Tanguay (1871-1890) published a seven volume collection known as the "Tanguay Collection" or also known as Genealogical Dictionary of Canadian Families from the Foundation of the Colony to the Present Day. Tanquay has the marriage taking place in 1744 and it is believed that because the first child was born in 1745 that the marriage contract was made in 1735, but that she had to come of age before the actual marriage could occur. It is also said that Jeanne was at the time of the marriage contract being cared for by foster parents named Bailly, which indicates that her parents had died before the marriage contract. (Need Documentation) A Transcription of the Marriage Contract by 2bgames as on Ancestry 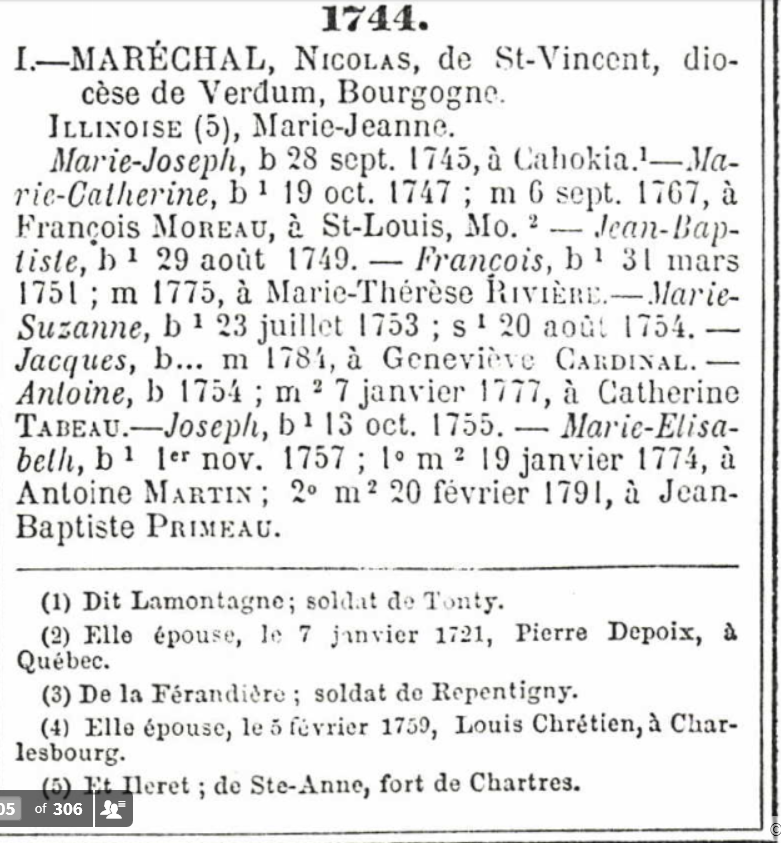 Uploaded to Findagrave and credited as: Quebec, Genealogical Dictionary of Canadian Families (Tanguay Collection), 1608-1890 lists children of Nicholas Marechal. Marie-Louise Marechal Lefebvre is not among them and was born in 1782, after Nicholas death in 1770.

On September 28, 1745, Nicolas and Jeanne a daughter Marie-Joseph Marechal, in Cahokia, St Clair County, Illinois. She would marry Joseph Antoine Theodore Calvet Sr. Marie Josephe died on July 1, 1791, in St. Louis and was buried the next day at Basilica of St. Louis (Old Cathedral) Cemetery. THEY ARE MY 6TH GREAT GRANDPARENTS 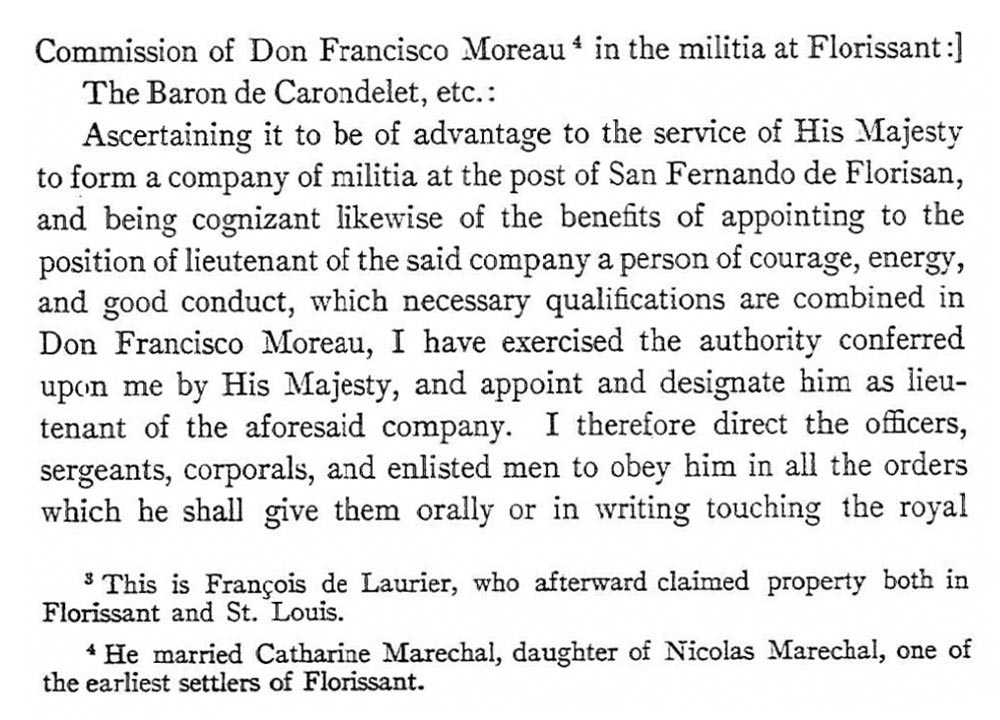 From The Spanish Regime in Missouri, Volume Vol II. LXXVII, Page 31, by Louis Houck (originally published prior to 1923).

On October 19, 1749, Nicolas and Jeanne have a daughter Marie Catherine Marechal, in Cahokia, St Clair County, Illinois. She would marry Lt François Joseph Moreau and have children. She would die on July 2, 1791 in Florissant (St. Ferdinand) St. Louis County, Missouri.

On August 29, 1749 Nicolas and Jeanne have a son, Jean Baptiste Marechal, in Cahokia, St. Clair County, Illinois. He would die on July 02, 1791 in Florissant, St Louis County, Missouri.

This is the first exerpt on Francois from The Spanish Regime in Missouri, Volume Vol II. CXXV, Page 384, by Louis Houck (originally published prior to 1923).

This is the second excerpt on Francois from The Spanish Regime in Missouri, Volume Vol Vol I. XL, Page 195, by Louis Houck (originally published prior to 1923).

On March 31, 1751, Nicolas and Jeanne have a son Francois Noel Marechal, in Cahokia, St. Clair County, Illinois. He would marry Marie Teres Rivière dit Baccane (Bacant) in 1775 and have children. He would die April 1827 in St. Louis, Missouri.

From The Spanish Regime in Missouri, Volume Vol II. CXXV, Page 384, by Louis Houck (originally published prior to 1923).

In 1754, Nicolas and Jeanne have a son, Antoine Marechal. He would marry Catherine Tabeau and have children. THEY ARE MY 5TH GREAT GRANDPARENTS

On October 13, 1755, Nicolas and Jeanne have a son, Joseph Marechal, in Cahokia, St. Clair County, Illinois. 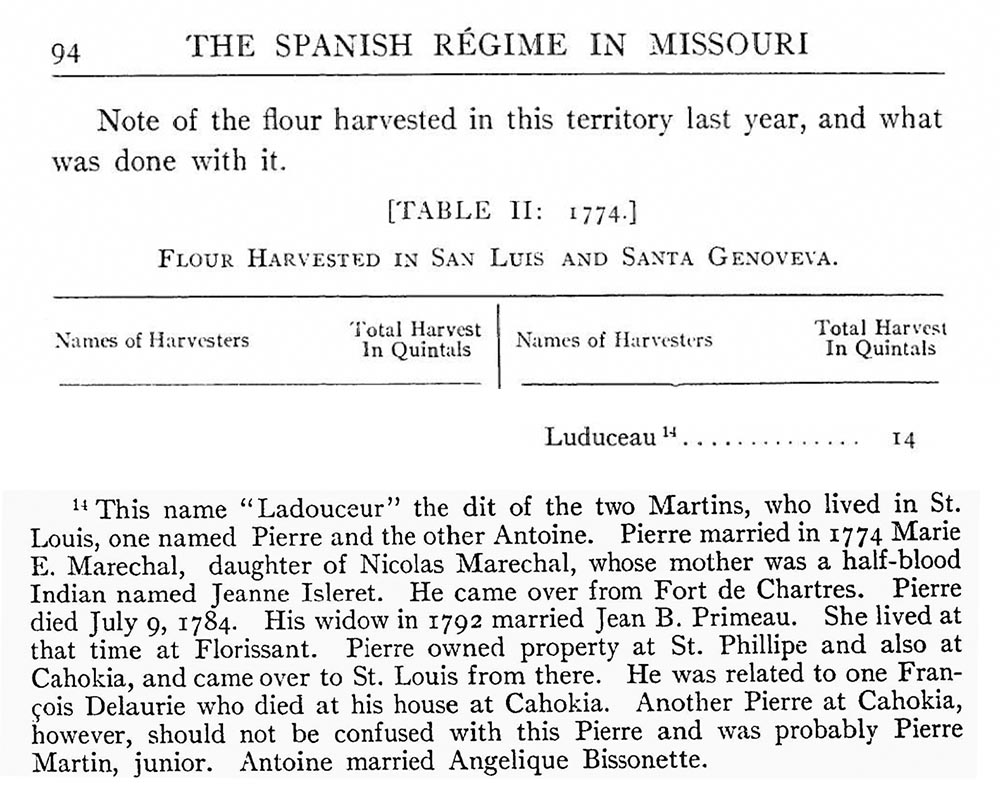 From The Spanish Regime in Missouri, Volume Vol I. XX, Page 94 and 96, by Louis Houck (originally published prior to 1923).

From The Spanish Regime in Missouri, Volume Vol II. CXXV, Page 391, by Louis Houck (originally published prior to 1923).

In 1759, Nicolas and Jeanne have a son, Jacques Benjamin "Jacob" Marechal. He would marry Genevieve Cardinal and have children. He would die in 1808.

Marie Jeanne had an inventory of all Nicholas' holdings made. (Need documentation from Missouri Historical Society in St. Louis) The following is a list of Marie Jeanne's portion after her husband's death and the division among her and her children:

In 1774, Marie Jeanne sold her property to M. Duralde. This is about the time that she and other members of her family moved a little northwest and settled what became Florissant, Missouri. (Need copy of Deed, No. 147, Volume 1, Page 300)  A frame house twenty five feet long by twenty wide with doors and windows, floored above and below with a stone chimney with the ground thereto. belonging, one hundred and fifty feet deep by one hundred and twenty front on the north adjoining the ground of one named Simoneau on the south a street which bounds the ground of Madame Chouteau on the east the Main street and in front by ground of Mr. Conand, the whole situated in the said town of St. Louis, for the amount of five hundred pounds of dressed deerskins, payable one half in the spring of the year one thousand seven hundred and seventy five and the other half in the spring of one thousand seven hundred seventy six reserving the privilege to live therein until the commencement of the coming spring; in consequence whereof the said Maria Hirte Marechal, widow of the aforesaid Nicolas Marechal has relinquished [with the above reservations] and abandoned all her right of property in the said house and ground [with is not enclosed] in favor of the said Martin Duralde that in virtue of these presence he may take possession from this day and dispose of the whole as property legitimately acquired [repeat of the conditions on his part]  Done and executed in St. Louis in Illinois, in the government hall the second day of the month of November the year one thousand seven hundred and seventy four and the aforesaid witnesses and party with the exception of Maria Hirte, widow Marechal, who made the mark of a cross, not knowing how to write.

From: Garraghan's "Saint Ferdinand de Florissant, The Story of an Ancient Parish" p57-58, transcribed by Rick Peterson: "The Marechals, ranking with the Aubuchons as a distinctive Florissant Valley family, look back for the progenitor of the Missouri branch of the line to Nicholas Marechal, Sr., a native of Verdun in France. He had been a soldier in the French service and married his wife, Marie Jeanne Isleret, a half Illinoise nation native american, at Fort Chartres previous to 1753. Having come to St. Louis in 1765 with a family of eight children, five sons and three daughters, he received from Laclede a verbal concession of the northwest corner of Main and Chestnut streets, where he built a home, dying there in 1770. Before 1792, his son, Francois M. Marechal, husband to Marie Therese Riviere, was in Florissant, where six of their children were baptized in the parish church. Of these Francois Noel Marechal became the owner of a farm in the Common Fields which had been allotted to Pierre Devaux about 1785 and later became a part of the Seminary farm. Besides Francois, four other children of Nicholas Marechal, Sr., lived in Florissant, - Marie, married to Joseph Calve, Sr., Catherine, married to Joseph Francois Moreau, Marie Elizabeth, married to Jean Baptiste Primeau, and Antoine, married to Catherine Tebeau."