Marie Jeanne Corset was born in 1738 in France to Francois Corset and Elisabeth Bienvenu.

Jean and Marie Jean Corset were married in Kaskaskia, Illinois, with a marriage contract in the records of Ste. Anne Parish, dated October 12, 1756. The marriage contract stated that Jean was from  Nouvelle-Chartres which is next to Fort de Chartes.

Jean was in the French military, but too young to have been involved in the Chickasaw conflicts. To encourage the creation of new farms or support existing ones, the Company of the Indies sometimes gave advances of funds in local currency or in kind to soldiers who wished to settle after discharge, sometimes as much as 10,000 livres in value. Jean was probably one of the soldiers to take advantage of this. He was discharged May 1, 1757, seven months after his marriage to Marie.

In 1759, Jean and Marie had a son, Jean Baptiste Maurice dit Chatillon II. His son, Henri Chatillon, has a famous story in Caradonlet, St. Louis, which I will add more info on later.

On March 25 1761, Jean paid cash 600 livres in royal treasury notes for the purchase of a house and lot at Kaskaskia from Jean Lagrange. The source of his cash was inducement from the Company to settle in Louisiana. Jean's occupation was stated as a master carpenter in the contract.

On January 25, 1763, Jean and Marie have a daughter, Catherine Maurice dit Chatillon.

Jean remained at Kaskaskia after the French surrendered Quebec in 1763, but by 1767 he had enough of the Americans so he cross the Mississippi River and settled in Ste. Genevieve. His daughter, Marie Madeliene, married Charles Boyer. His daughter Marie Elisabeth married Jacques Boyer, brother of Charles. The Maurice dit Chatillons and Boyers were two families who were a significant part of the settlement of the new town of Ste. Genevieve. 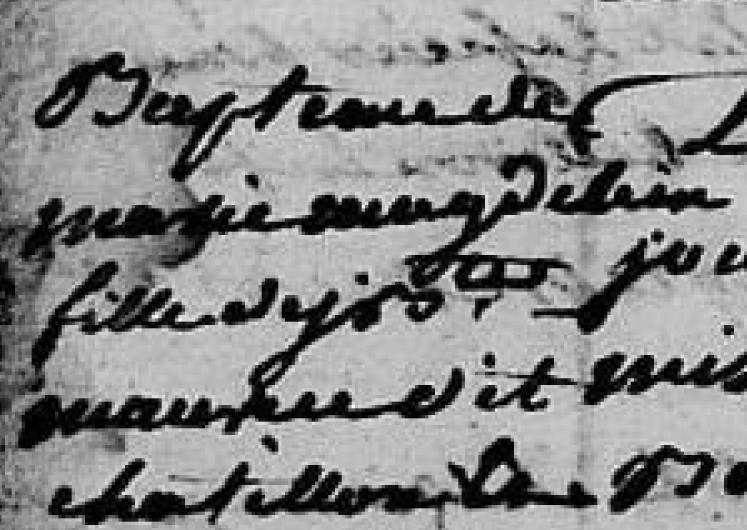 On September 13, 1767, Jean and Marie have a daughter, Marie Madeline Maurice dit Chatillon. Madeleine born in Ste. Genevieve, Ste. Genevieve County, Missouri and her baptism record reads: The year 1767 and the 13th day of September, I missionary priest, acting as parish priest, baptised a girl born on this day from the legitimate marriage of Jean Baptiste Maurice dit Chatillon and Marie Jeanne Corset, her father and mother, from this parish, we named her Marie Magedeleine. Her godfather is Sr Henry Carpentier and her godmother Marie Magdelaine Mille, wife of Sr Robinet from this parish, undersigned with me. (signatures) Marie Magdelaine Robinet, Carpentier, J Baptiste Maurice, JL..ecorin, priest

On December 2, 1773, Jean and Marie have a daughter, Teresa Maurice dit Chatillon.

On July 9, 1786, Jean signes the Marriage Contract of Charles Boyer and Madelaine Maurice dit Chatillon as her father. His occupatoin is mentioned as "master carpenter." The contract does not mention his wife.

The land recorder Julien LaBriere reported, "the banks having caved in very much, compelled the Inhabitants to think of removing from the Old Village, and in 1784 three men named Loisel, Maurice Chatillon, and Jacques Boyer removed from the old village and established the present village of Ste. Genevieve." Jean had been in Ste. Genevieve for over 17 years and was concerned about the safety of his home site and wanted to move to higher ground. He sold his house in the old town in October 1783 and may have been the first to move to the new Ste. Genevieve that year with his wife and his son-in-law, Jacque Boyer. Houck's History of Missouri stated that the first settlers in the new town of Ste. Genevieve were Jacque Boyer and "one Loisel." Andre Deguire dit Larose is credited with beginning Ste. Genevieve and Loisel, Marice Chatillon, and Jacque Boyer were credited for beginning the new Ste. Genevieve.