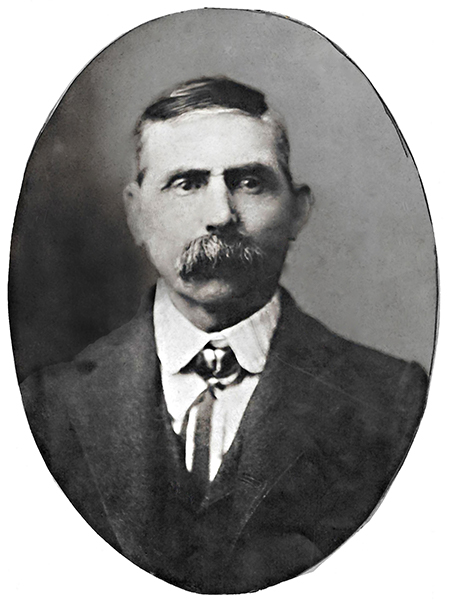 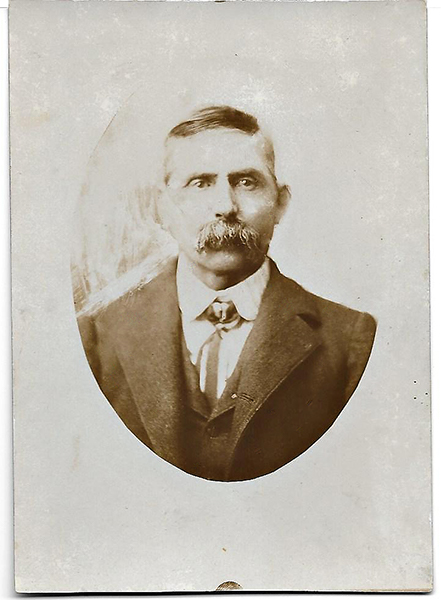 James Bernard was born October 18, 1852, in Potosi, Washington County, Missouri. In the 1840 and 1850 census, his parents were living in the Liberty Township of Washington County. The birth city of Potosi is from his obituary.

Fourche a Renault post office was about 8 or 9 miles northwest of Potosi, in section 7, township 38 N., 2 E. This is near the site of the old Mine Renault, discovered about 1725.

Note: Find George with his parents in the 1870 census. The civil war ended in 1865. Was the family displaced temporarily due to the war? Families also moved a lot due to mining opporunities for work.

James Bernard Rutledge was married to Nancy Estes on August 2, 1874 (marriage record) in Washington County, Missouri. She is referred to as "Miss Nannie Elis." An interesting tidbit is that Nancy has a sister named Lucy Estes and James Bernard has a brother named Stephen John Rutledge; that Lucy and Stephen John were married on October 27, 1878, just four years later. A pair of brothers married a pair of sisters. We see this closeness in the family between these two brothers. Nancy and James Bernard name their second son Stephen John after his Uncle. After Lucy died in 1886, two of their children, Maggie Josephine (born 1880) and Matthew John (born 1882) were raised by their grandparents, that being James B and Stephen's parents, George and Rosine Rutledge.

On December 17, 1879, their fourth child and daughter, Rose Belle Rutledge, as born.

In the June 7, 1880 census, Kingston Township, Washington County, West 177 District, James Bernard is age 28 working in lead mining, born in Missouri, with both parents born in Missouri. Nancy is age 23, keeping house. Their daughters are Mary (age 3), Ann (age 1) and Rose (age 5/12). James Bernard is also shown living with his parents, George W and Rosine Esiell, and his sister, Rose, are also living in Kingston Township, District 177 (not west) in 1880, taken on the 2nd day of June, 1880. Was James Bernard counted twice? Were they having marital problems or were his parents in need of care that he was temporarily with his parents? He is listed as age 27 in the one with his parents and age 28 in the one with his wife. He would not be 28 until October of that year.

James Bernard's Uncle John R., and Grandma, Frances, are living in Richwoods in 1880. 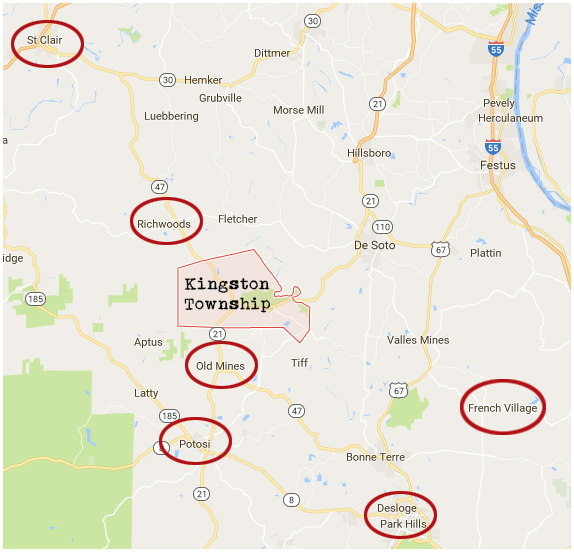 On November 24, 1884, their seventh child is born, Stephen John Rutledge.

On August 4, 1887, James Bernard's tenth child is born, Archie Rutledge. Archie's mother, however, is James Bernard's second wife, Sarah. This child was born while James Bernard was married to Nancy Estes. James and Sarah would later marry after Nancy's death.

On March 18, 1889, their eleventh child is born, James William Rutledge. (this is my Great Grandpa). He was born in St. Clair, Missouri.

Nancy dies on October 11, 1890, from complications of child birth.

The 1890 census is unavailable as it was burned in a fire. 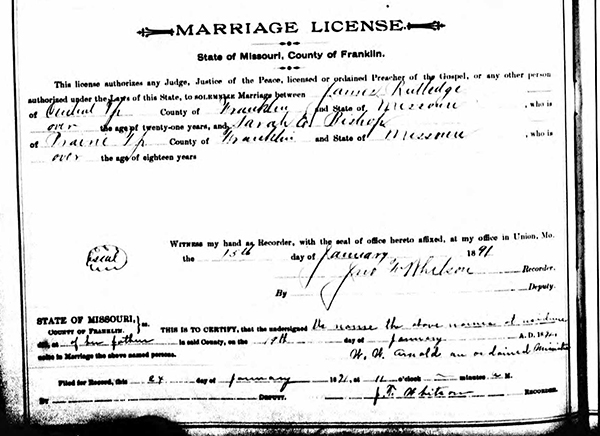 This is James Bernard and Sarah Rutledge. There are two original photos, both of which appear to have been reprinted from a group photo because there is someone to their right. This one is oval shaped embedded on a ripped rectangular paper. 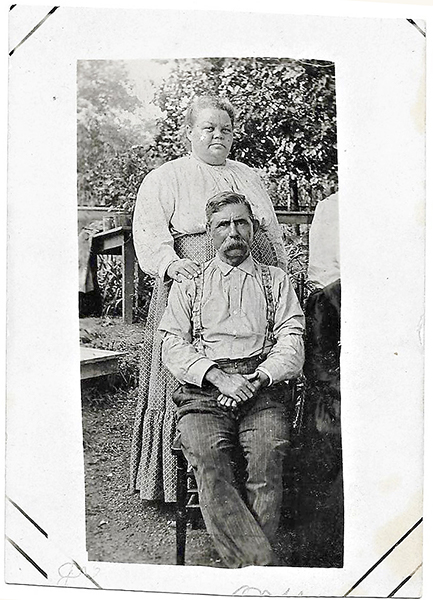 This is the second original which is a rectangle cut image embedded on a rectangular paper. James was 38 when he married and Sarah was 25 years old. In this photo he looks older than the first photo posted at the top of the page, with the exception that it appears he has more hair on the top of his head.

James and Nancy's son, Robert E. Rutledge, dies in 1891 at the age of 10 years. In this telegraph, Sarah sent for James to "Come quick if you want to see Bud alive" at 11:30 a.m. It is unclear if the telegraph was sent from or to, or both, St. Clair, Missouri.

In 1895, James and Nancy's daughter, Georgia Ann Rutledge, dies at the age of 17 years.

According to James Bernard's obituary, he moved in about 1904 from St. Clair to Desloge, Missouri, the same year his Dad passed away. He worked for Desloge Consolidated Lead Company for 23 years until his death, suffering from a baffeling illness the last two years of his life.

In the May 12, 1910 census, St. Francis County, Randolph Township, District 0083, James Bernard is 57 years old and has been married 19 years (m2 for second marriage). His occupation is "engineer" and his industry is "stationary" as a wage earner. He owns a house that is mortgaged, with a farm schedule of 12. (Note, the numbers in the last columns were annotations made during the post-enumeration processing. The codes were placed on the census to support and speed up the keypunch process/system.) His wife, Sarah E, is 43 years old and has been married 19 years (m1 for first marriage). She and her mother are born in Missouri, but her father is born in Kentucky. She speaks English and can read and write, and works at home. Next listed is a servant by the name of Martha Burt (age 46) who is widowed with 10 children having been born and 9 alive. James Bernard's mother, Rosine (age 76) is living with them . She is widowed and has had 4 children, with only 3 alive. She is born in Missouri, but it lists both parents having been born in France. It indicates an immigration year of 1818 and naturalization, but this must be for her parents because she was born in Missouri. One son remains in the home, James W. Rutledge (age 21) whose occupation is "fireman" in the "stationary" industry. James Bernard and James William, father and son, worked in the same industry.

In the January 22, 1920 census, Randolph Township, St. Francois County, Missouri, (name of incorporated place: Desloge) James Bernard (the census taker misheard and wrote James D.) is 67 years old and owns his home "free" (without mortgage). His occupation is listed as an " engineer" in the "lead mill" industry for wages. Sarah E (age 54) is not working. Their grandson, Franklin, is living with them at the age of 10. (James Franklin Rutledge is Stephen John Rutledge's son.) There is also a housekeeper living with them, Ella L. Marler (age 38) who is widowed.

James Bernard Rutledge died March 7, 1927, at 6:00 a.m., at the age of 74 years, in Desloge, St. Francois County, Missouri. His death certificate indicates he was born in Potosi, Missouri. He died of cancer of the liver. His physician attended him from June 5, 1926, until his death on March 7, 1927. The death certificate indicates he was buried on March 9, 1927, in "St. Francois, Desloge" by an undertaker C.G. Boyer. He is suspected (by researcher at findagrave.com) to be buried at the Odd Fellows Cemetery at Park Hills, Missouri, although his obituary says Odd Fellows Cemetery in Desloge. The listing at the I.O.O.F. in Park Hills indicates that both James and Sarah are buried there in unmarked graves.

Transcription of James B. Rutledge obituary:

James B. Bernard died at his home in Desloge Monday morning, March 7, 1927, at the age of 74 years, 4 months, and 19 days, after a lingering illness of several weeks.  Funeral services were held at the Second Baptist Church Wednesday afternoon, conducted by Rev. O.S. Taylor of St. Louis, who is a friend of the family. Interment followed in the Odd Fellows Cemetery in Desloge.

The deceased was united in marriage to Miss Mary Estes August 2, 1874. To this union, ten children were born, four of whom preceded their father in death. The six living are: Ms. Mary Ramey of St. Clair, Mo.; Mrs. Geo. Hayes of Richwoods, Mo.; Ms. Katherine Boggs and Mrs. Rupkey of St. Louis; and two sons, James W. and Steven Rutledge of St. Louis.  The mother and wife died October 11, 1890 and the deceased was again united in marriage to Miss Sarah Bishop of Oak Grove, Mo. January 19, 1891.  To this union, one son was born, Archie Rutledge of Wilson, Okla. who with his mother and six half sisters and brothers, survive.  Mr. Rutledge was a member of the Parkview Baptist Church and had been since it was organized.  He was a good Christian husband, father, and neighbor and will be sadly missed.

The News extends sympathy to the bereaved ones.

Here is a convenient list of the children mentioned in the obituary. The years mentioned are the death dates of the four children that died before James Bernard Rutledge. 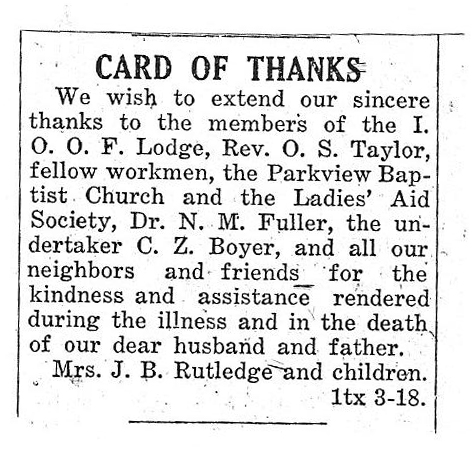 Here is a second obituary found in the St. Clair Chronicles.

Mrs. Sarah E. Rutledge of Desloge, age 62 years, died at her home, Wednesday evening at 7:30 o'clock, following an illness of three months, caused by an infection in her right foot.

Funeral services will be held at the home this afternoon (Friday), at one o'clock, conducted by Rev. Chas. Wilson of Cantwell. Interment will be at the I.O.O.F. Cemetery at St. Francis.

Mr. Rutledge preceded her in death a year ago March ninth. They had been residents of Desloge for the page twenty two years. She was a good Christian woman. The News extends sympathy to the bereaved relatives.

This is a plat map in 1930 of the townships in Washington County, Missouri. I wonder if the township lines moved over the years. I find it interesting that Potosi is a block that is diagonal cutting into liberty county. James' obituary indicates he was born in Potosi in 1852, but the census has the family in 1840, 1850, and 1860 living in Liberty township.