When did the family move from Illinois to Missouri and why? Where did Robert and John move to? 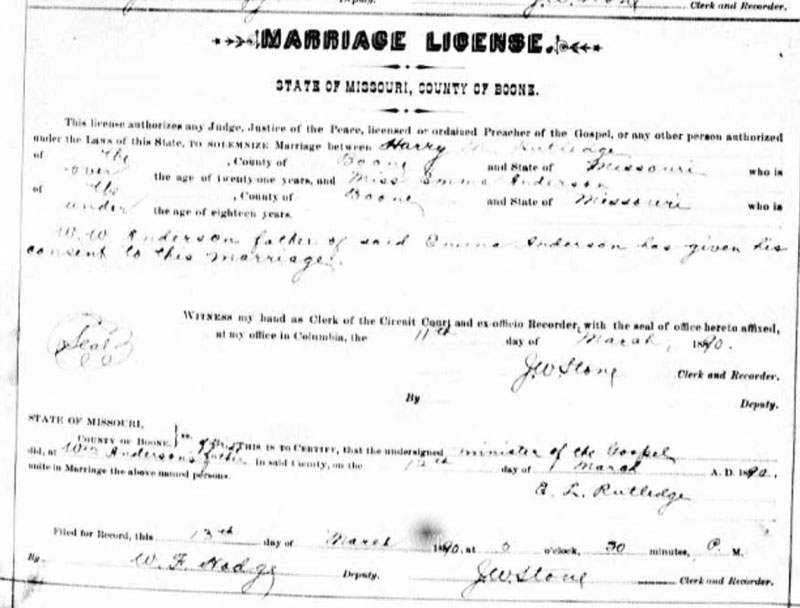 The Reverend E.L. Rutledge officiated. Edward L. Rutledge is Harry's brother. Most of Harry’s brothers were Methodist ministers. He was married the first time by his brother in Booneville Missouri. His brother James was a circuit rider for the Methodist Church.
1890 census does not exist.

On January 17, 1891, Harry and Emma have a child, Eva Jane Rutledge, in Sturgeon, Boone County, Missouri. She would marry Elbert Davis and have one child, James Ralph Davis. She would die January 19, 1919, at the age of 28 years. 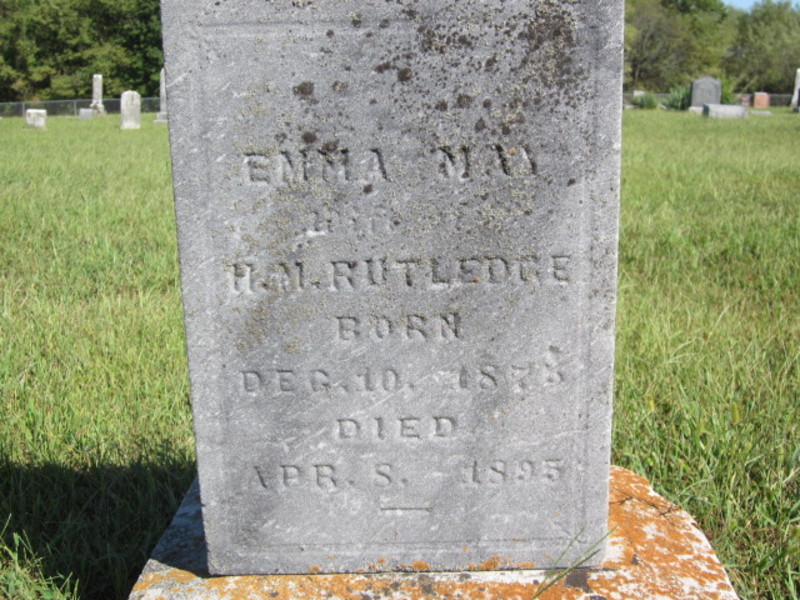 Emma Mae Anderson died April 8, 1895 at the age of 21 years. Edgar was 8 1/2 months old. His father could not care for him, so family Taylor friends cared for him. James Polk Taylor married Martha Susan “Mattie” Matlock in 1891. Edgar would take on the Taylor name and become known as Edgar Rutledge Taylor. It is believe he legally changed his name to Taylor in his early teens.

It is possible that she died in child birth. Since they were married 5 years with no children, did they have trouble having children? She is buried in Prairie Hill Cemetery, Wayland Township, Chariton County, Missouri, which the family location confirms the marriage was not another Harry Rutledge. Her tombstone reads: Wife of H.M. Rutledge born Dec 10, 1983, Died April 5, 1895. (find-a-grave transcribed the stone as 1875 which I believe is incorrect.) 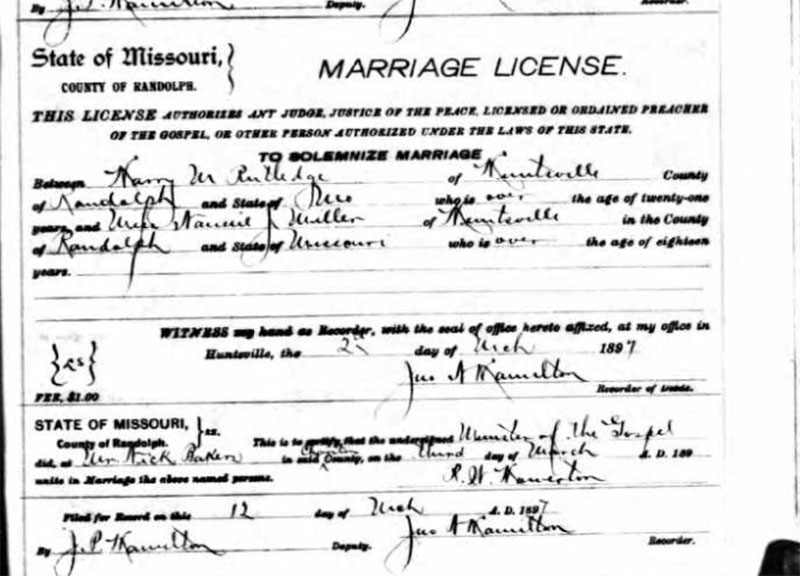 On October 19, 1898, Harry and Nancy Jane have a son, Hubert Alvin Rutledge, who sometimes uses the name “Hugh” in Huntsville, Randolph County, Missouri. (If Nancy’s age is correct, she was 39 years old, which would explain why only one child was born.)

On June 2, 1909, wife Nancy Jane dies at the age of 50 years and is buried in Hickory Grove Cemetery, Randolph County, Missouri.

The Cuba Review, Cuba, Missouri - 14 Sep 1911 - Page 6 (full article)
On September 14, 1911, in numerous newspapers across the state, the M.E. Church (Missouri Methodist) announced ministerial appointments in many districts in the state and H.M. Rutledge is appointed in the Macon District, Macon Circuit, as “supply.” 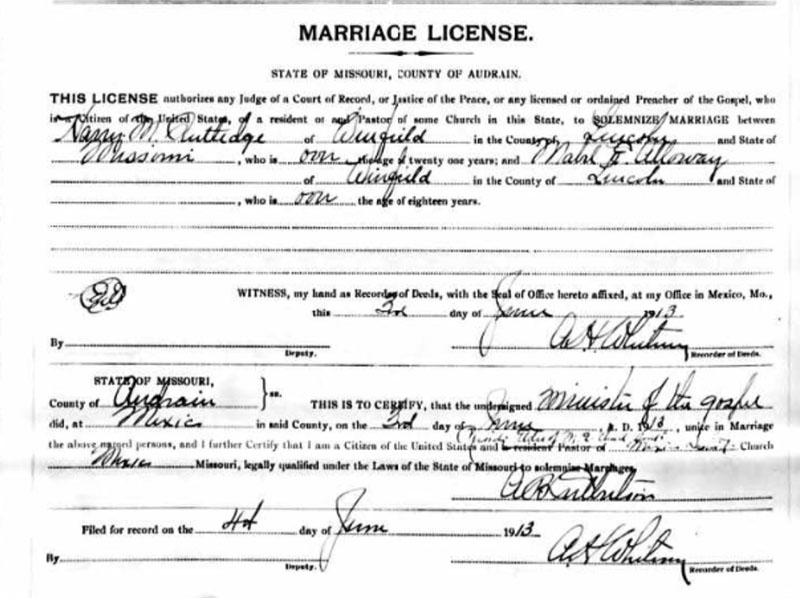 One June 3, 1919, Harry (45) marries Mabel E. Alloway (29) in Mexico, Audrain County, Missouri. She would outlive Harry. (Where is her death information? I have found her mentioned in brother Frank’s obituary in 1941, so she was alive then still with the surname Rutledge, so not remarried. She is in St. Louis in 1930.)

In the 1920 census, Colorado, Mesa County, Fruita, District 0087, Harry is 57 years old (incorrect age listed), living with his wife Mabel (36), and son Hubert (21). His father is from West Virginia and his mother is from Delaware. He is employed as a farmer.

In the Salt Lake Telegram, Salt Lake, Utah, September 23, 1922, H.M. (Harry Milton) Rutledge is living at 604 West Ute Street, Grand Junction, Coloroda, and looking for his son H.A. (Hubert Alvin) Rutledge who was last living in Sego, Utah, where he worked in the coal mine. 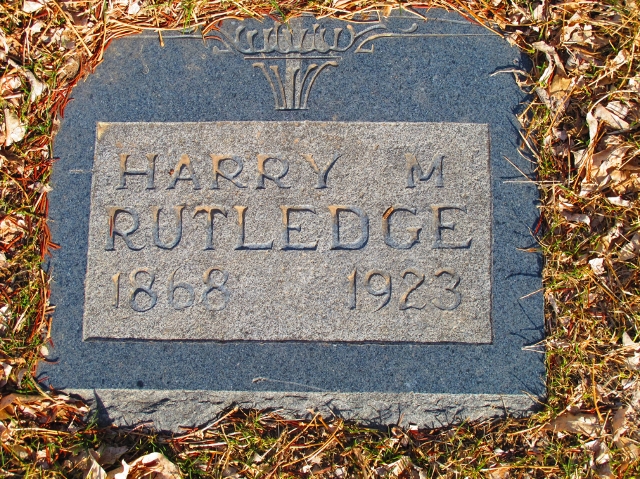 (Note: A family member has attempted and paid for the death certificate, but has run into "only family member access" problems. The 1870 and 1880 census he is living with parents Richard and Emily Rutledge.)

604 West Ute Avenue, Grand Junction, Colorado where Harry was living at his death as seen in 2019 on Google Maps.

Who were the Rutledges in Stockton? There are a lot of newspaper articles that indicate a Harry and a Mable Rutledge visited, and a lot more. Are they relatives? I see an Archie Rutledge which is of interest because my line has an Archie Rutledge.
Also, I see William Richard Rutledge had a son named Johnson -- I was just going through some non-related lines with the name Johnson...need to check that out again...families tended to name the same names so that can be clues.