Emily Kerby was born April 3, 1828, in Delaware. (Who are her parents? Is it "Kerby" or Kirby"? Where is evidence of her maiden name?) 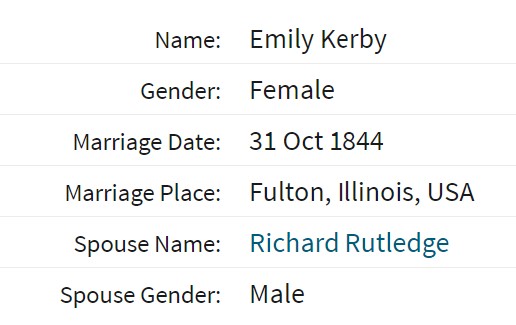 On October 31, 1844, Richard (27) married Emily Kerby (16) in Fulton County, Illinois. (Note: This document is not on ancestry; find copy of marriage document. When did Richard and Emily move to the Fulton County area from Virginia and Delaware?)

On November 25, 1846, Richard and Emily have a son, Barker John Rutledge (location of birth?).

On December 12, 1852, Richard and Emily have a daughter, Frances Elizabeth Rutledge. (location of birth?).

On September 19, 1854, Richard and Emily have a son, George Finlay Rutledge. (location of birth?).

On November 1, 1855, Richard received a land patent jointly with James H Epperson (Is he related?) from the U.S. General Land Office, Quincy, Illinois District. The legal description is "The Northeast Quarter of the Southwest Quarter of Section 34, in Township 6 North, of Range One East, in the District of Lands, formerly subject to sale at Quincy, now Springfield, Illinois, containing 40 acres." (Meridian 4th PM - 1815 Illinois). From the above map, we can see the parcel to the east of North County 34 Highway (also known as Marietta Road) and south of E. Buchwheat Road. 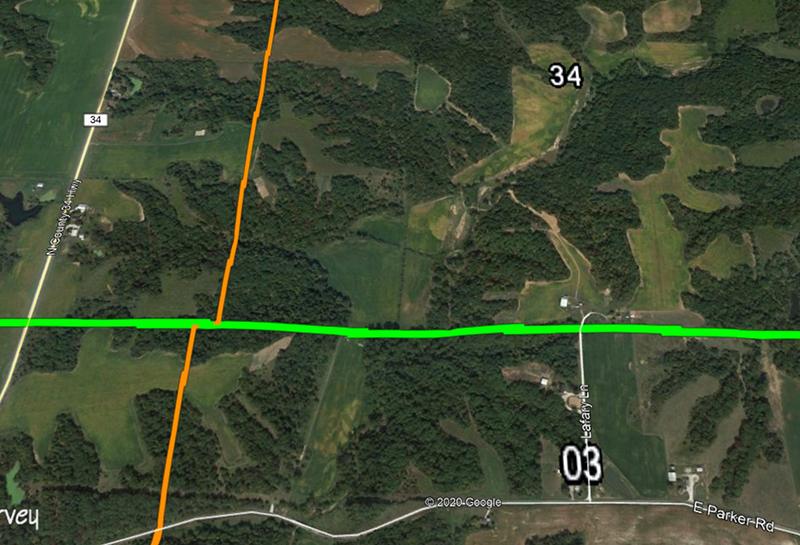 Access today to the area seems to be from the south on E. Parker Road, to Lafary Lane, to Temple Road.

This leads to a farm home and the road to the plot is on the north side of the structures. 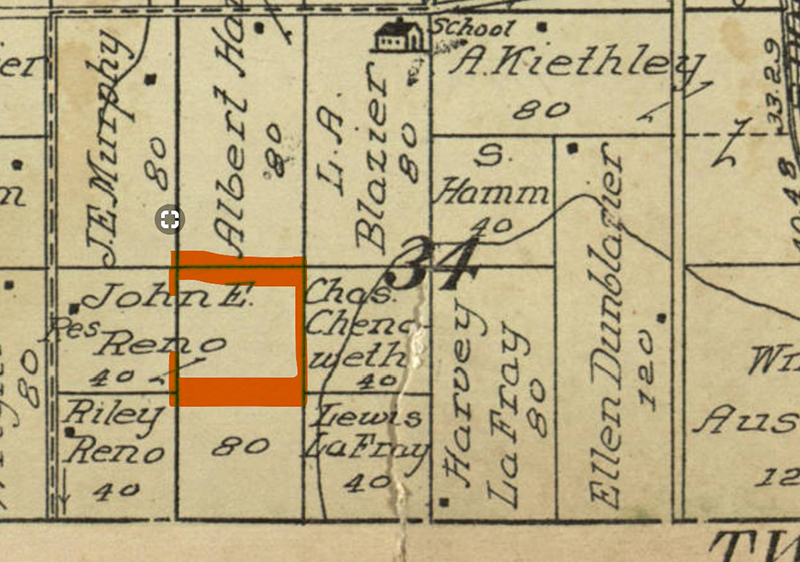 In 1913 on the plat map, a John E. Reno owned the land and you can see the "L" shaped property combined as one parcel of real estate. 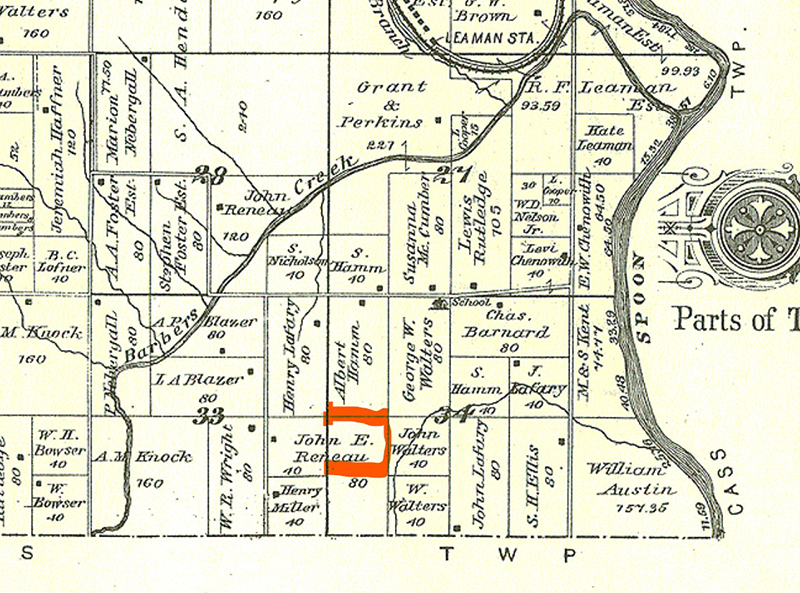 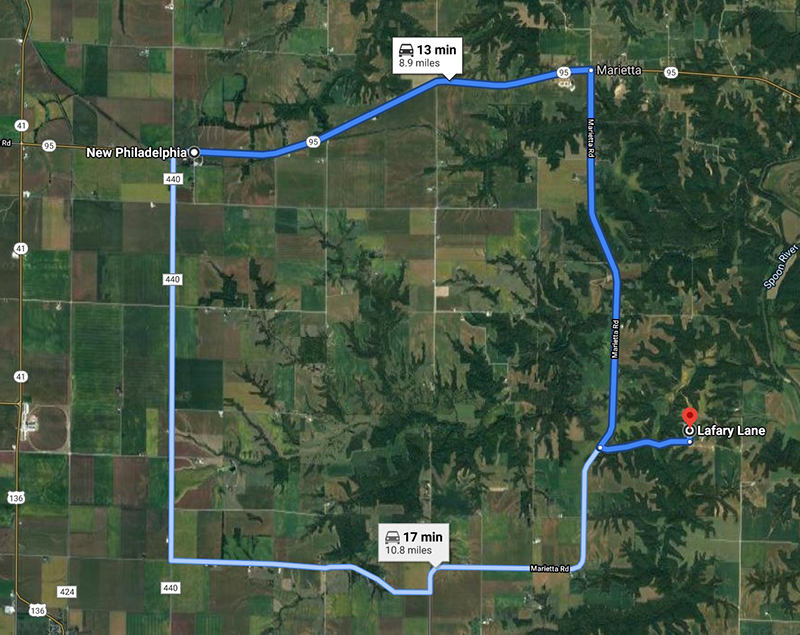 This map shows the close proximity to the post office New Philadelphia as the location of residence in the 1860 census below. New Philadelphia is in McDonough County and the land patent is in Fulton County. Did the family really live on the land grant and the census taker made an error in having them live in the wrong county by using the nearest post office as the location?

This source map is a good perspective of location with the land patent being in Harris Township of Fulton County.

On October 4, 1856, Richard and Emily have a son, Johnson Keith Rutledge. (location of birth?).

In the 1860 census, New Salem Township, McDonough County, Illinois (post office New Philadelphia -above on map), Richard is 42 years old, born Virginia, a farmer, owning real estate valued at $1400 and personal property valued at $450. He is living with his wife Emily (32, Delaware), and children John (13), Robert (10), Frances (7), George (5), Johnson (3), and Lyman (1). Also in the home is Ellen Rutledge (30, Virginia), who is a seamstress. Neighbors are Robert Rutledge and George Rutledge and John Rutledge. There is a Taylor in John's household. (How is Ellen and the others related?)

Read more about New Salem Township in McDonough County, Illinois in 1885. There is mention of a Robert G. Rutledge, Rev. George Rutledge, and Mary Rutledge. What are their relationships? There is no mention of a Kerby/Kirby family. 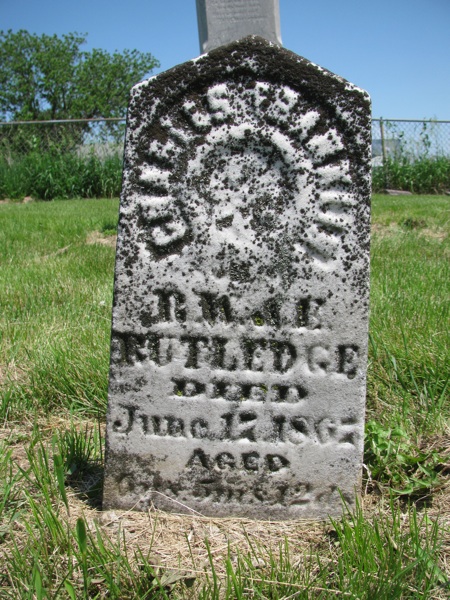 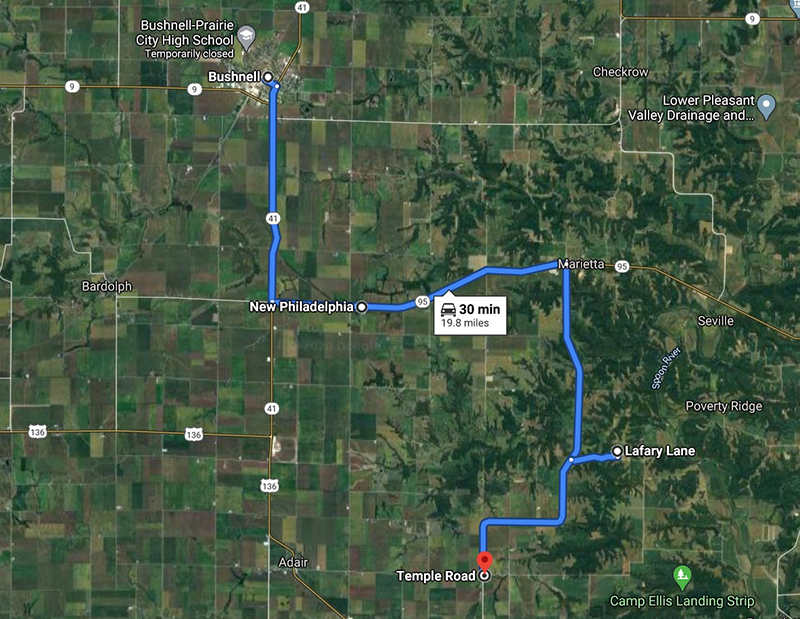 Barker/Miner Cemetery is located in Section 18 of Farmers Township. If you are going in a westerly direction on Route 95, go past Marietta and take the first left turn as you leave the town. This should be Route 34. Keep going south on Route 34 as it winds through the countryside. You will see the cemetery on the right where Route 37 (1550N) intersects with Route 34. Route 37 is also known as Temple Road. The above map shows a distance of 19.8 miles from Buschnell (1865 tax list location below) to the cemetery location.

The cemetery can be seen on Google Maps. 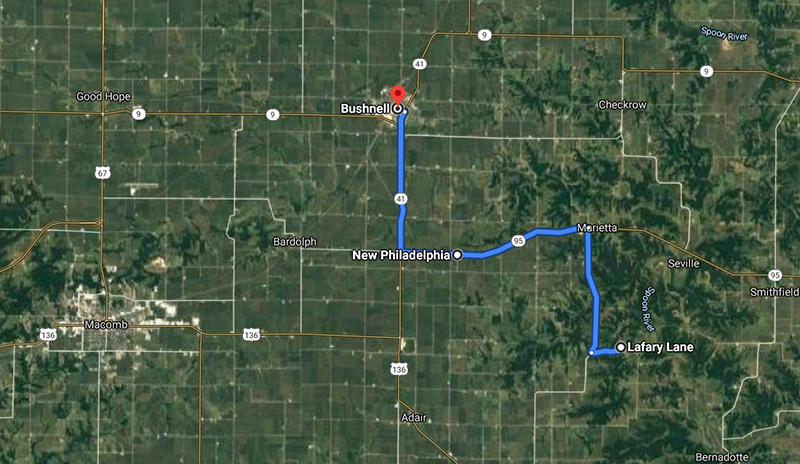 The 1865 IRS Tax List, Illinois District 9; Monthly and Special Lists; June 1865-Apr. 1866, shows a location of Buschnell, article column is "income," no. in abstract is 241, valuation of 108, rate of tax 5, for a total of 540. The above map shows the location of the land patent through the post office of New Philedelphia, and then Bushnell where he was taxed (as distance of 24 miles).

On September 1, 1866, Richard and Emily have a son, Richard Warren Rutledge, who died the same day and is buried in Barker-Miner Cemetery in Fulton County, Illinois. 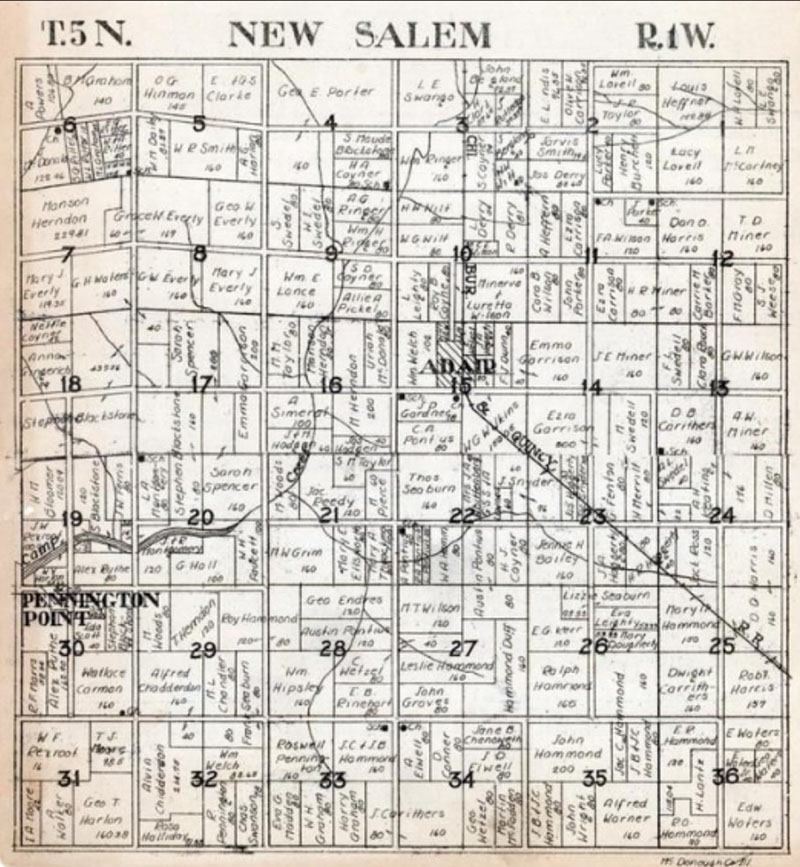 Did they move slightly or was it just a post office change?

Emily died on September 5, 1884, and is buried in Chariton, Chariton County, Missouri.

The note on the photo indicates she died of typhoid after caring for her 26 year old son, Lyman James Rutledge, who had the fever. He died one week after his mother, never know of her death. 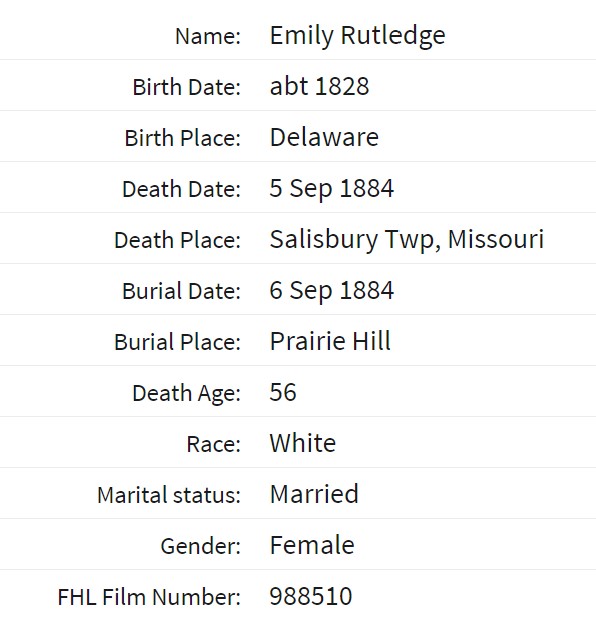 This is Emily's death notation on Ancestry. (Note: Get copy of original document at FHL Film number 988510.) 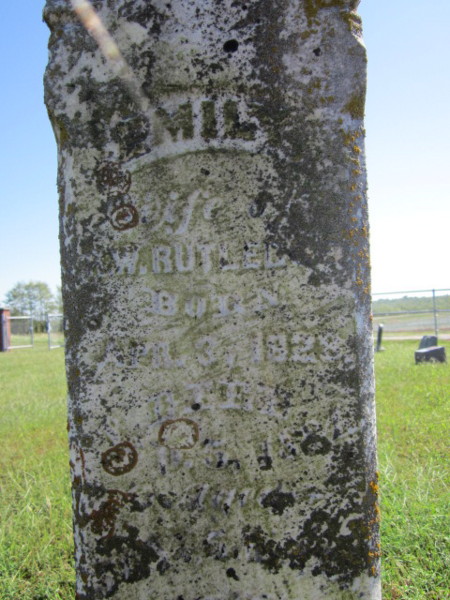 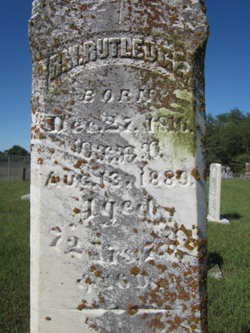 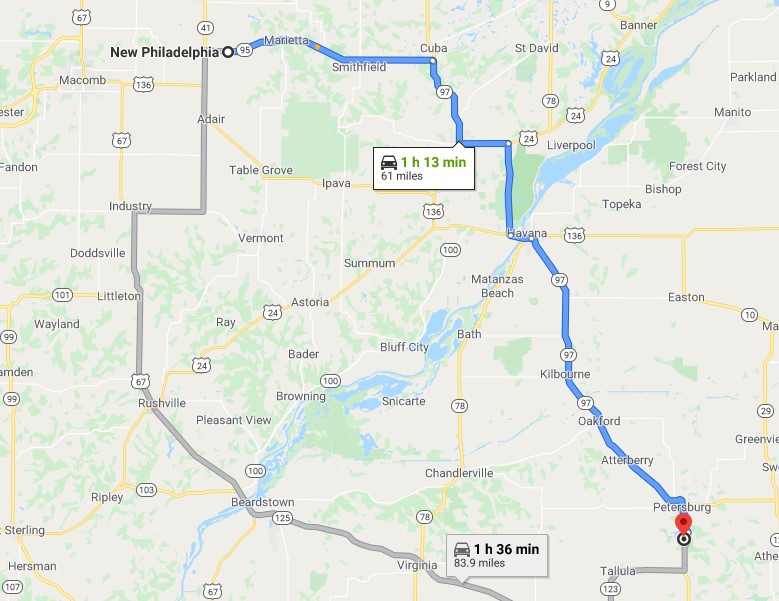 I was curious about "Lincoln Land" which I know as New Salem and we all know Lincoln dated Ann Rutledge. Since they were in New Salem Township, I looked up the distance from Lincoln Land to their first post office location. New Salem is in Pike County. Ann Rutledge's father founded New Salem, Illinois.