The Battle of Athens State Historical Site is for the civil war history buffs! It is located in the very Northeast corner of Missouri and is very close to the Iowa-Missouri border. It is the northernmost civil war battle west of the Mississippi River and is located along the Des Moines River. (Wikipedia) The battle was on August 5, 1861, so it was very early in the war, not long after April 12, 1861, Confederate troops fired on Fort Sumter in South Carolina's Charleston Harbor.

I most enjoyed that this site is preserved as an original old town. Many of the buildings and streets are gone, but there are street signs to show you where the streets ran so that you can get the perspective of where the homes stood and the fact that the battle happened right in the middle of town.

Upon entering the town, the first thing you see is the church. It almost seems as if it is on the outskirts of town.

I think we missed part of the park as you can see in the map. I forgot to go back and try to locate the campground and picnic areas. I also failed to locate some of the trail heads, but it was so cold when we were there it was difficult to do what we did do.

Some of the buildings have signs on the doors. This sign tells us that the Athens Methodist church was organized in 1867, which is after the battle. There is a list of the pastors as well. 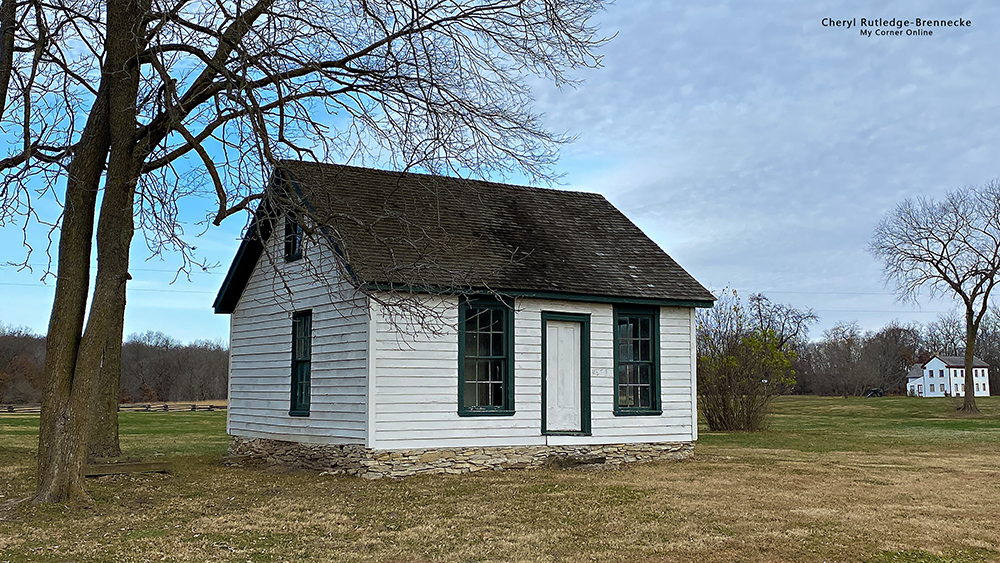 The first house that you come upon is the William S. French home. It would be interesting to schedule a tour of the buildings, but we were on our own to explore and can only imagine that this is what most of the homes in the city looked like. The size would be appropriate for a general population of people anyway. There would have been houses and streets all along the fields behind and beside this house.

This is the Moreland House. It is very skinny! However, it is much larger than the other home. I feel as if it is a French style home. 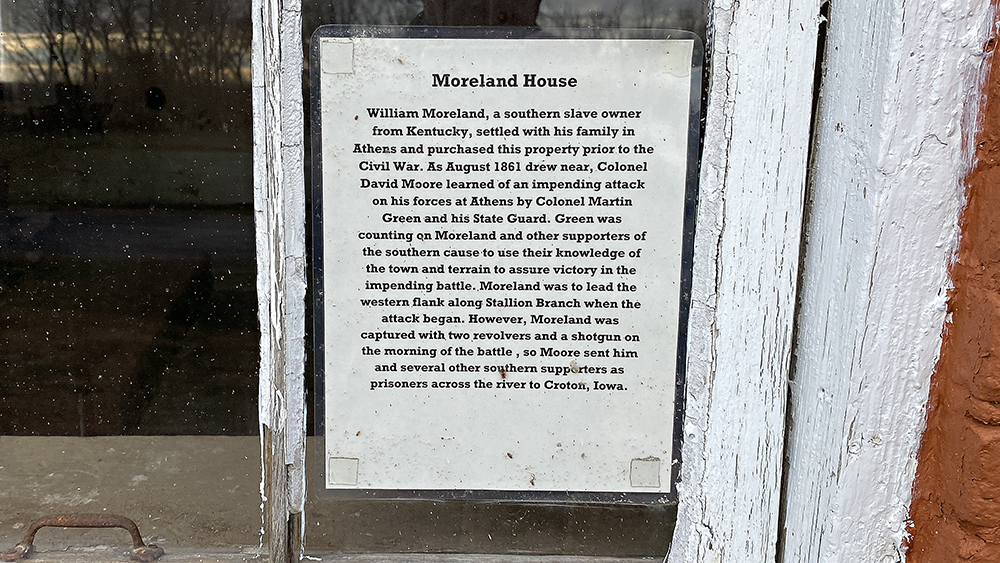 The home was owned by Colonel David Moore who participated in this battle. 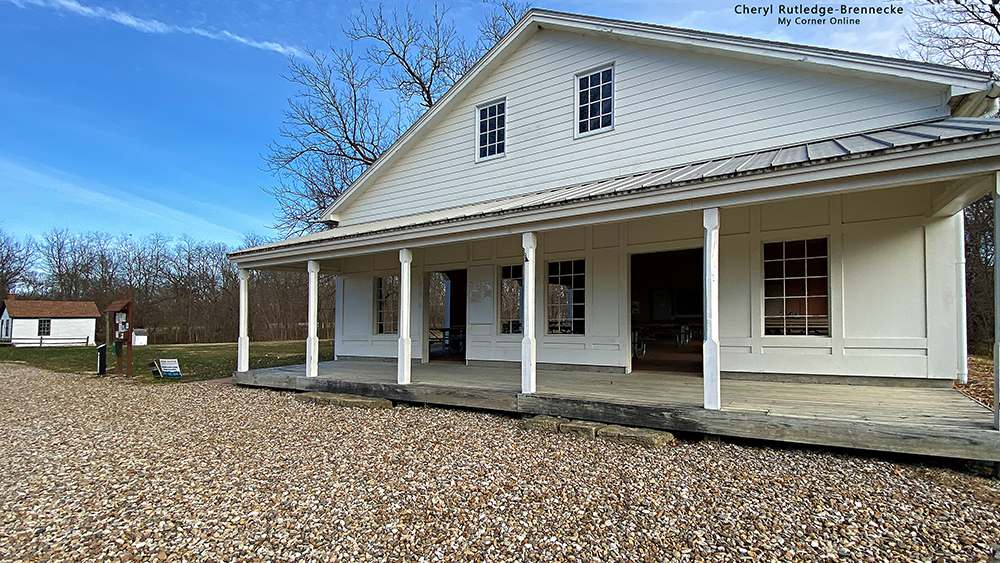 This is the newer pavilion called the Shelterhouse and Showerhouse that can be rented. I did not have time to figure out what formerly stood at this location. It sort of looks like a general store to me. 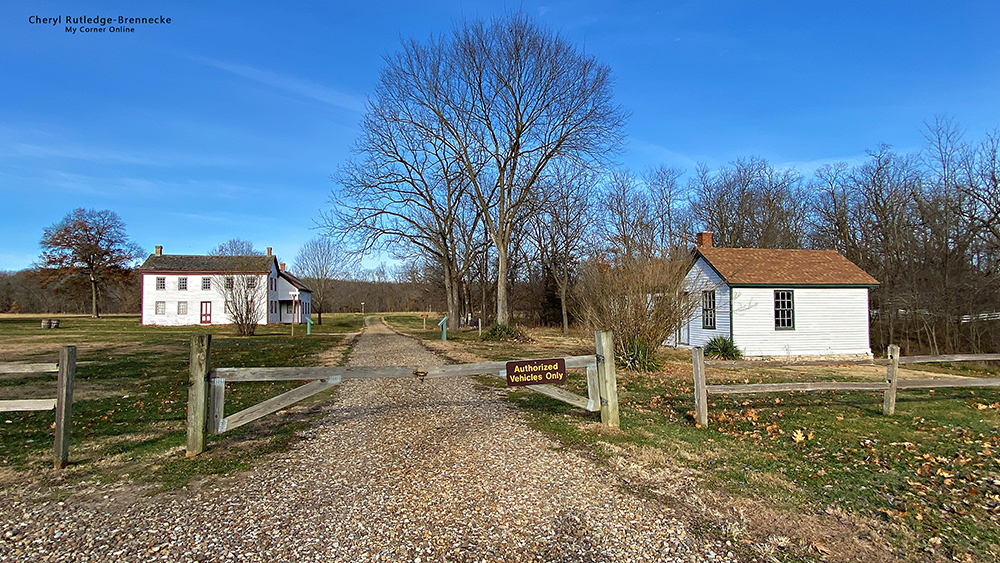 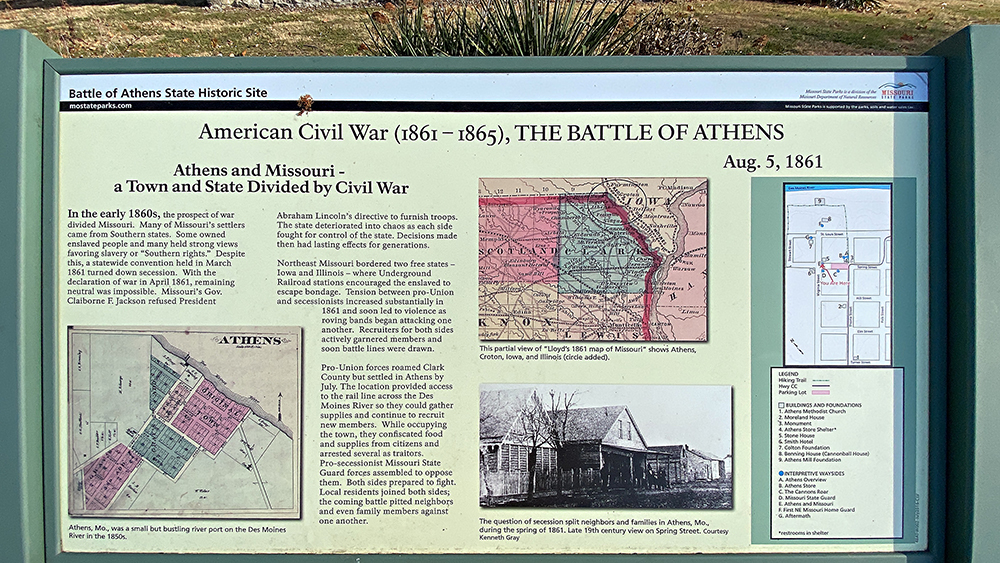 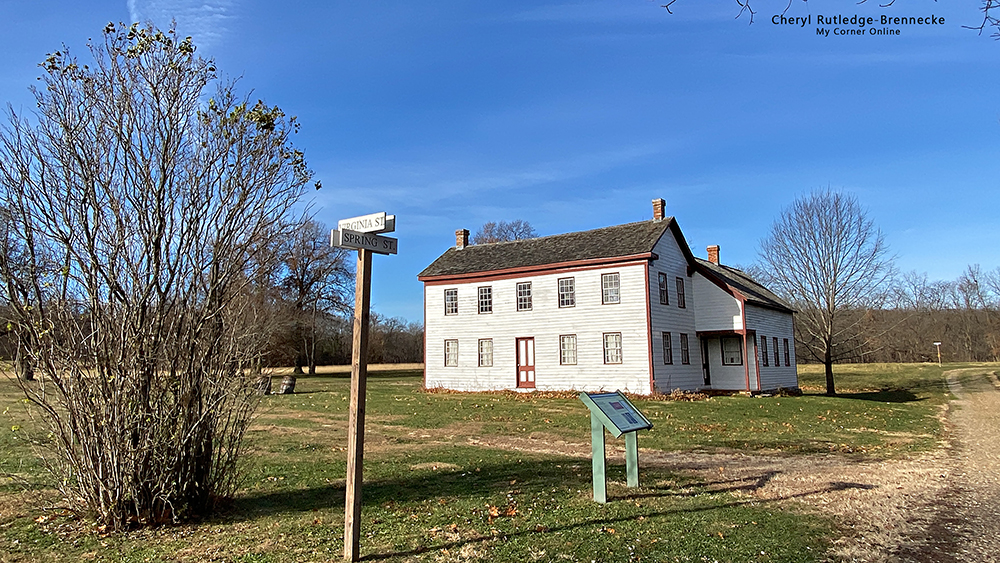 This is a view of the Smith Hotel, but I took this photo to show the street signs that are placed where no streets or houses exist. It helps to get an idea of what the town looked like when the streets did exist. This hotel was built in the 1870's after the battle took place. 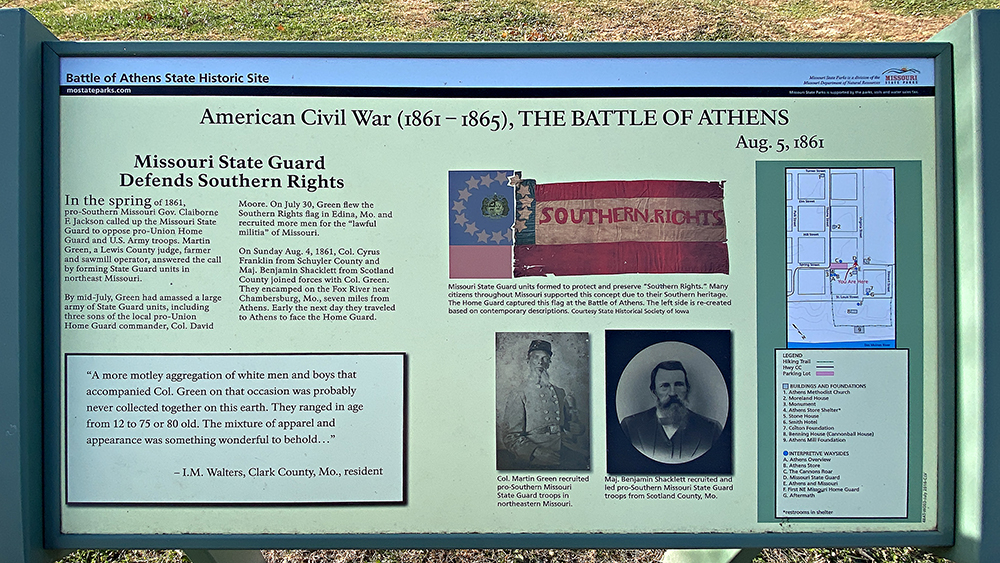 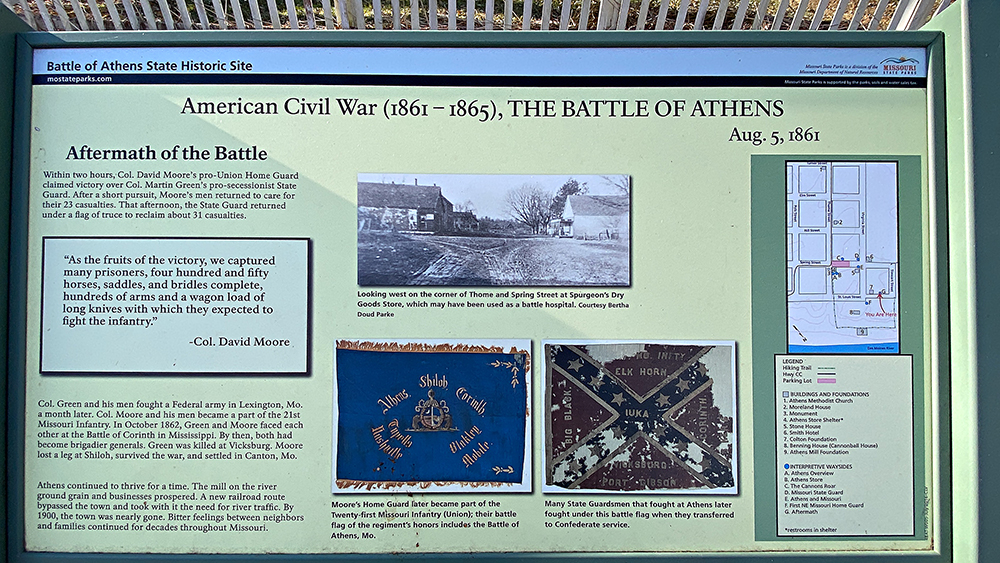 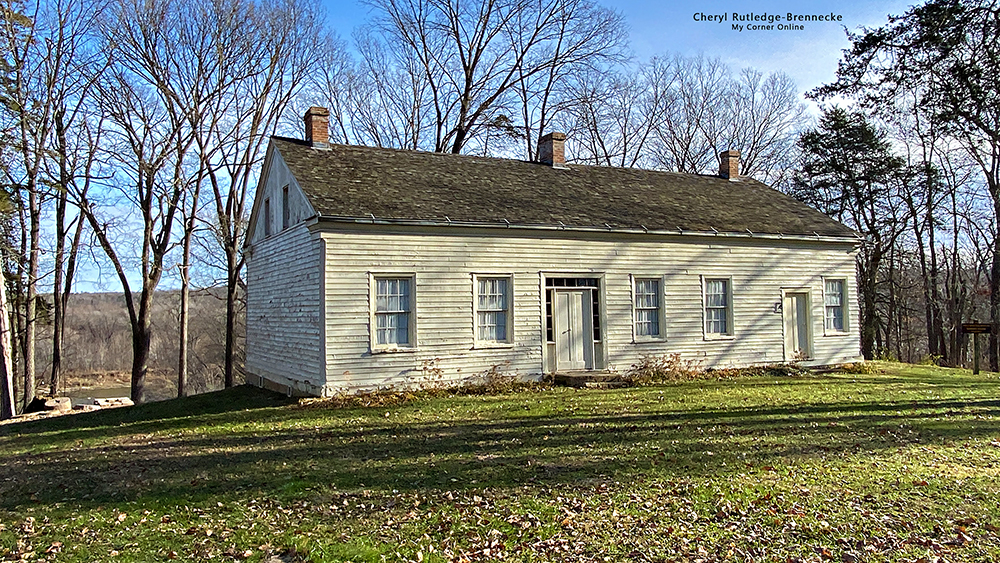 This is Benning House that overlooks the Des Moines River as you can see in the background of this photo. The door on the right is the door which next to it can be found the cannonball hole. The thought came to me as we and everyone else who visits observes a hole in some wood that was created in 1861, how the person who shot that cannon would have no thought or inkling of an idea that people for over a thousand years would be looking at the hole they made. It is just a hole! Well, it is a hole that came out the back side of the house where it made another hole and people for over a thousand years are still looking at that hole too. I suppose it does bring reality to how scary it was for the people hiding out in that house during the middle of the battle. I sure hope they were underground in a cellar at the time. Why would they never fix those hole? Wasn't it cold inside the house with those holes? So many questions. Am I the only one to think this way? It is kind of cool to see how well made the houses were back in 1861. I am always thinking they were much more archaic than they really exist to be. 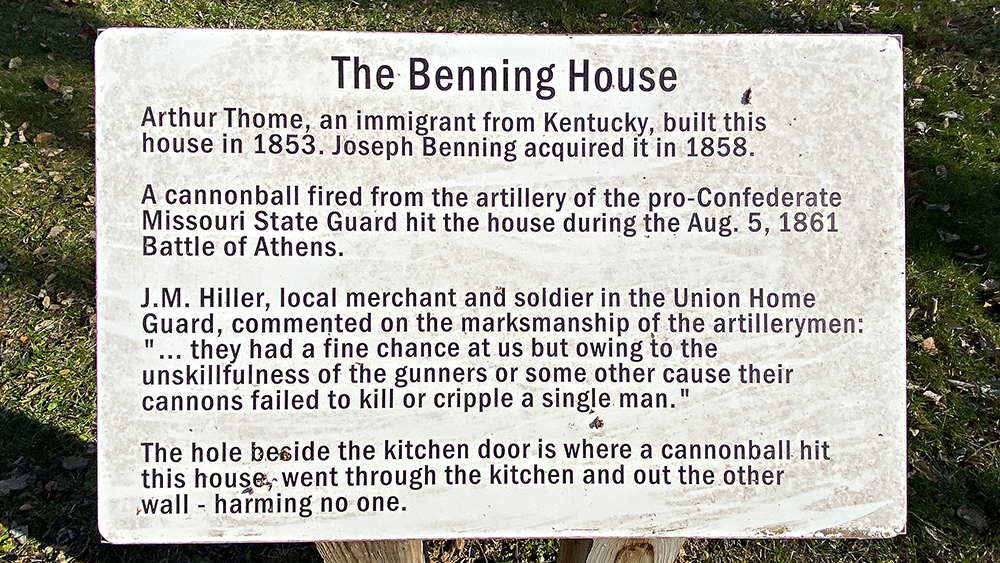 This is the sign that explains the cannonball hole. I am assuming it came from such a great distance as where they have the model cannon displayed pointing at the house from the middle of the field behind the hotel. 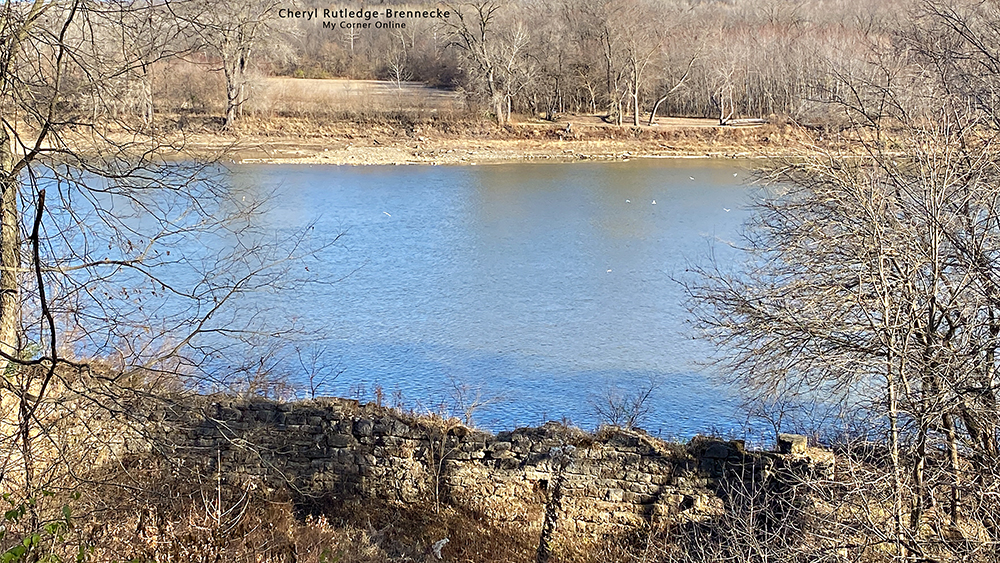 This is a view of the river where the remains of the mill exist. You can take a walk down the mill trail to walk in front of the remains.

If you go when the air is warmer, do take time to explore and enjoy yourself while learning.