The Iliniwek Village State Historic Site is in the northwestern corner of Missouri. From the State website, "The site is the only Illinois Indian village site found in Missouri and is thought to have been occupied from about 1640 through the late 1670s. Excavations at the site lead archaeologists to believe that perhaps 8,000 people lived in the village when Louis Jolliet and Father Jacques Marquette came through the area in 1673." 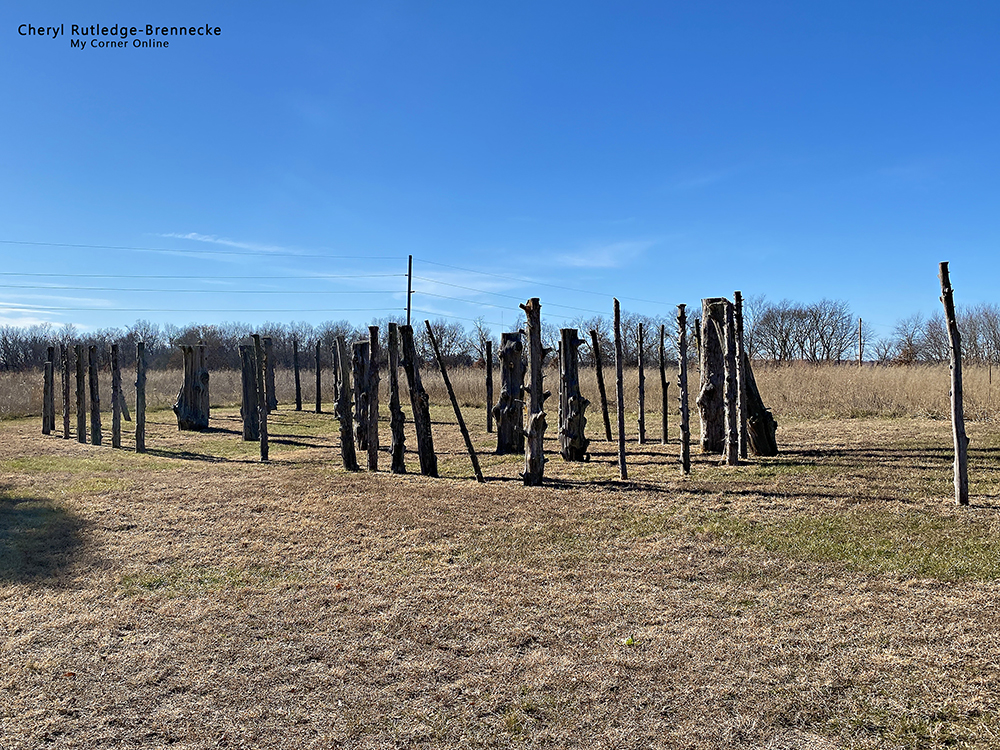 The Illinois Indians once included 12 groups, but only five would survive early European contact including the Peoria, Cahokia, Tamaroa, Michigamea, and Kaskaskia. I trace one of my ancestors to Cahokia and two of my ancestors to Kaskaskia, so it is likely that further up my ancestry I am related to these Indians. Therefore, I was particularly interested in visiting this historic site. Also, there is a chance my French ancestors came down from Canada with Louis Jolliet and Father Jacques Marquette and married the Illinois Indians which I reference above.

These Indians are also known as from the culture of the Mississippian Native Americans.

I did not take my big camera on my trip as I was not anticipating visiting all these locations, so these are just cell phone photos taken during the video recording. 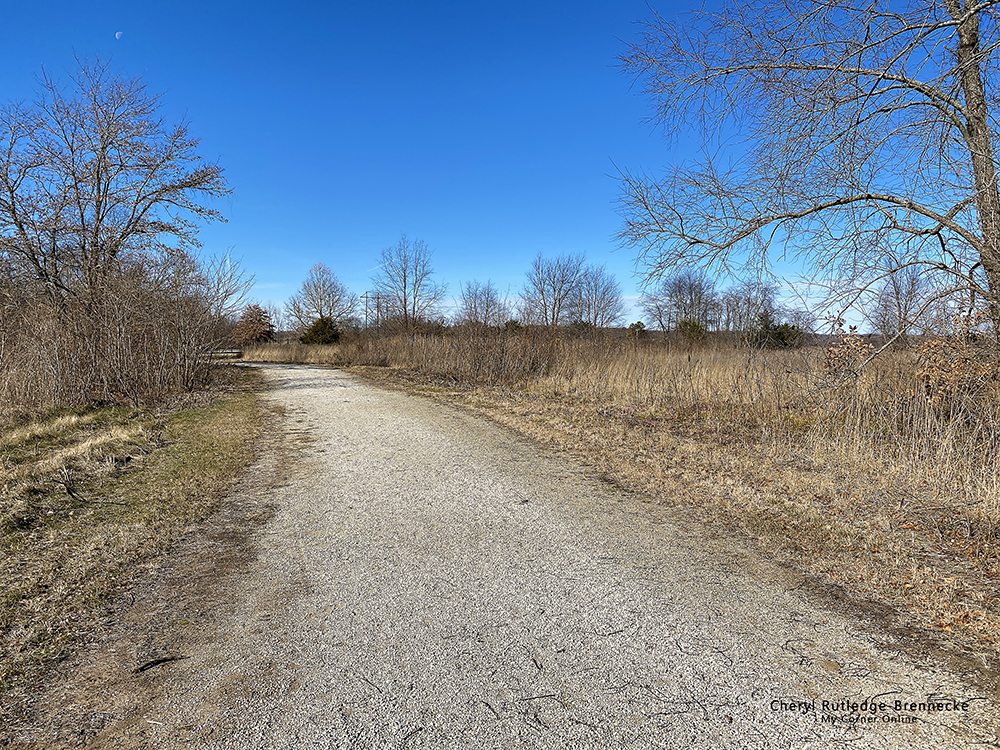 The Illinois Indians are different than the Illini football team! That's an easy way to remember to say the name of the Native Americans as in the state and to use a long "i" for the football team. That would mean that Iliniwek is pronounced like the state as well.

We visited on November 26, 2021, so the day was cold and the scenery not so green, but it was still a beautiful day. You can take the trail down to one house and then back to the parking lot and down to the other house. However, we enjoyed the trail as it is a perfect nice hike. This is where it comes out to go along a flat farm field. I think I read that this is the Des Moines river bottoms. I'm not sure.

At the end of the field you can spy the slough. 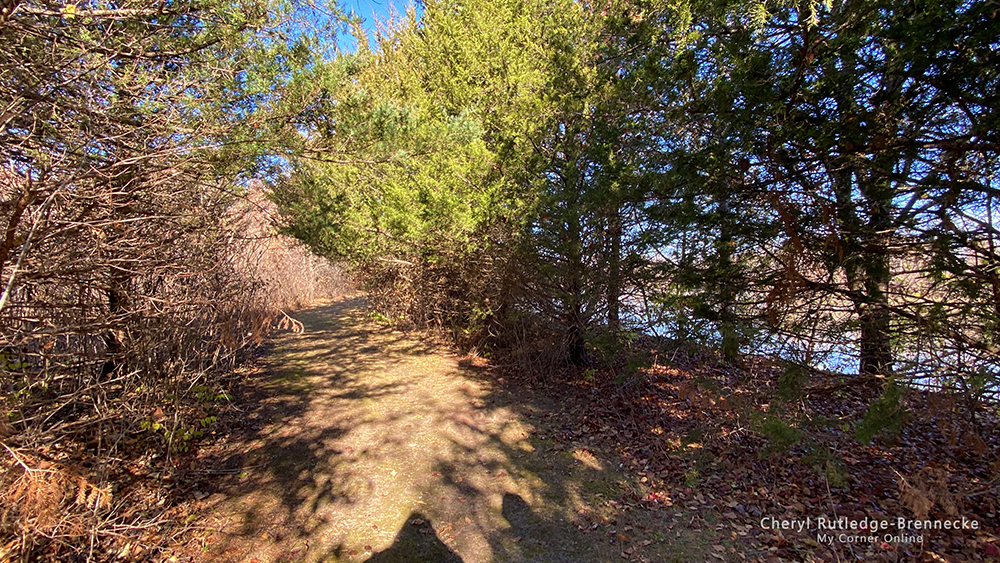 The trail turns up the next long side and goes under a canopy of trees following the slough to the right. If you have your thinker on, you can imagine the Iliniwek living here and walking down to the slough to utilize the waters for food and wash or to catch animals to eat from the water. 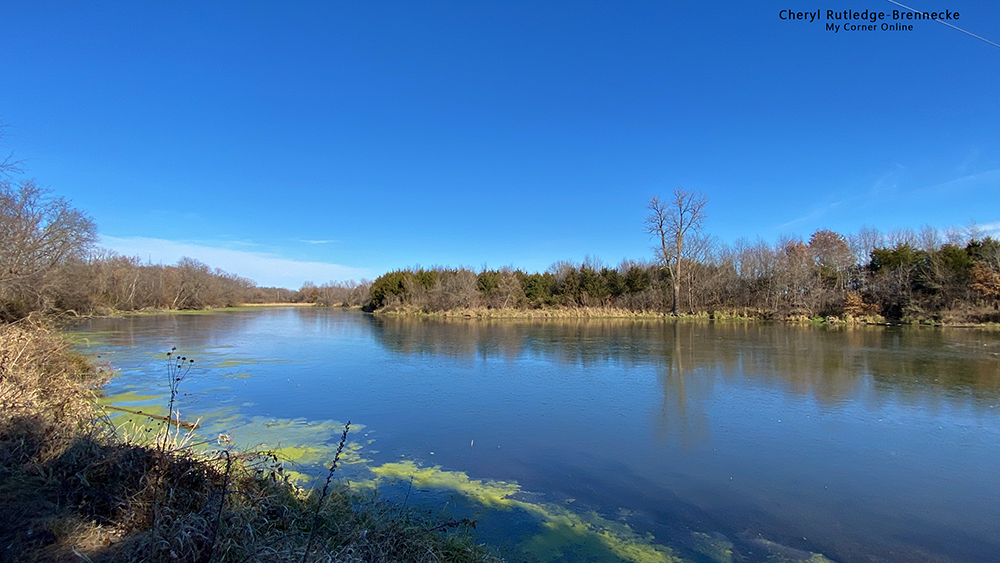 You can barely see the slough through the trees along the trail and then the trail opens up for a beautiful view of the bend in the waters. There is a bench here too.

After coming out of the slough area the trail picks up on the gravel road again which takes you to the second house, the round house. I do like that they are placing the log poles where they discovered the digs of the original house so that the size of the house is realistic. I did walk through each and imagine the space and how it would have been to live in such a space. this one reminded me more of the size of a large tee pee we had stayed in some years ago. These excavations occurred in 2007 which to me seems not all that long ago. It would seem they are still working to discover and grow this state park. 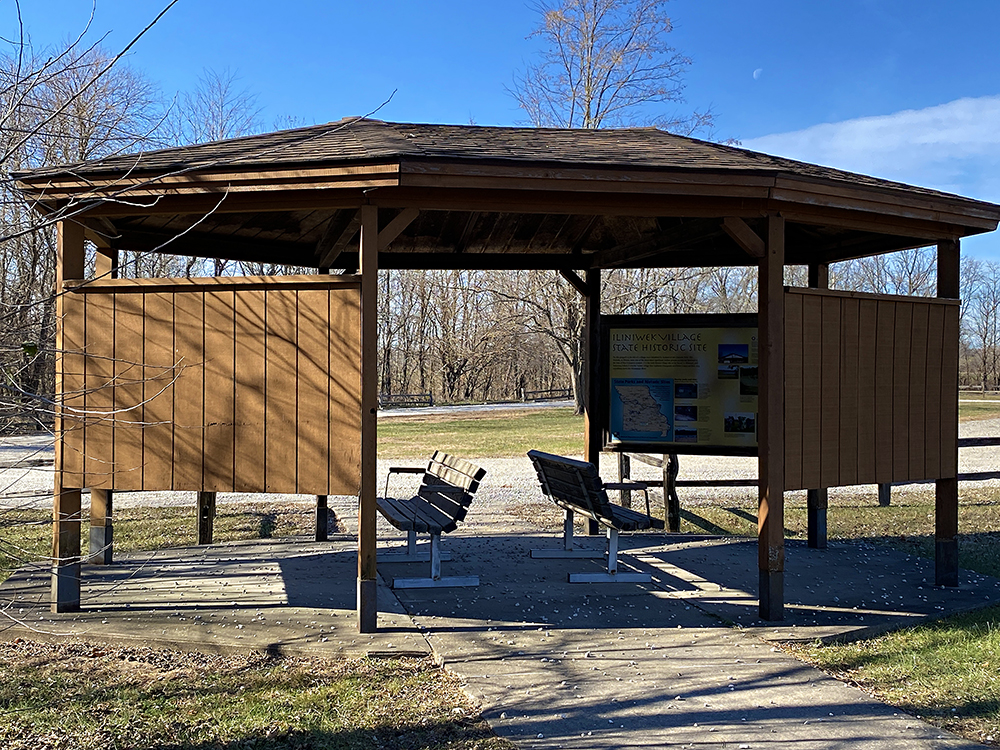 This is the interpretive area that serves as the beginning and the end of the looped trail. There is a lot of information here to read and to learn.

The Illinois Indians began abandoning Iliniwek Village about 1677. Robert Cavelier, (aka Sieur de La Salle) built Fort St. Louis on Starved Rock between1682 and1683 near present-day Utica, Illinois. All of the Illinois Indians except the Michigamea moved to be near the fort and the Iliniwek Village was no longer occupied. So I have plans now to visit Starved Rock State Park in Illinois!